Cybersecurity firm McAfee said that the cybercriminal underworld is generating 480 new threats per minute. That’s one of the details in the new McAfee Labs Threats Report: December 2018.

McAfee reported that internet of things malware was up 73 percent in the third quarter, while cryptocurrency mining malware was up 71 percent, even as the value of many cryptocurrencies have declined. Meanwhile, the ripple effect of the 2017 takedowns of Hansa and AlphaBay dark web markets continued as entrepreneurial cybercriminals took new measures to evade law enforcement.

“Cybercriminals are eager to weaponize vulnerabilities both new and old, and the number of services now available on underground markets has dramatically increased their effectiveness,” said Christiaan Beek, lead scientist at McAfee, in a statement. “As long as ransoms are paid and relatively easy attacks, such as phishing campaigns, are successful, bad actors will continue to use these techniques. Following up-and-coming trends on the underground markets and hidden forums allow the cybersecurity community to defend against current attacks and stay a step ahead of those in our future.”

Each quarter, McAfee assesses the state of the cyber threat landscape based on research, investigative analysis, and threat data gathered by the McAfee Global Threat Intelligence cloud from over a billion sensors across multiple threat vectors around the world.

In an effort to evade law enforcement and build trust directly with customers, some entrepreneurial cybercriminals have shifted away from using larger markets to sell their goods and have begun creating their own specialized shops. This shift has sparked a new line of business for website designers offering to build hidden marketplaces for aspiring shady business owners.

“Cybercriminals are very opportunistic in nature,” said John Fokker, head of cybercriminal investigations at McAfee, in a statement. “The cyberthreats we face today once began as conversations on hidden forums and grew into products and services available on underground markets. Additionally, the strong brands we see emerging offer a lot to cybercriminals: higher infection rates, and both operational and financial security.”

Hacker forums provide an elusive space for cybercriminals to discuss cybercrime-related topics with their peers. McAfee researchers witnessed conversations around the following topics in Q3: 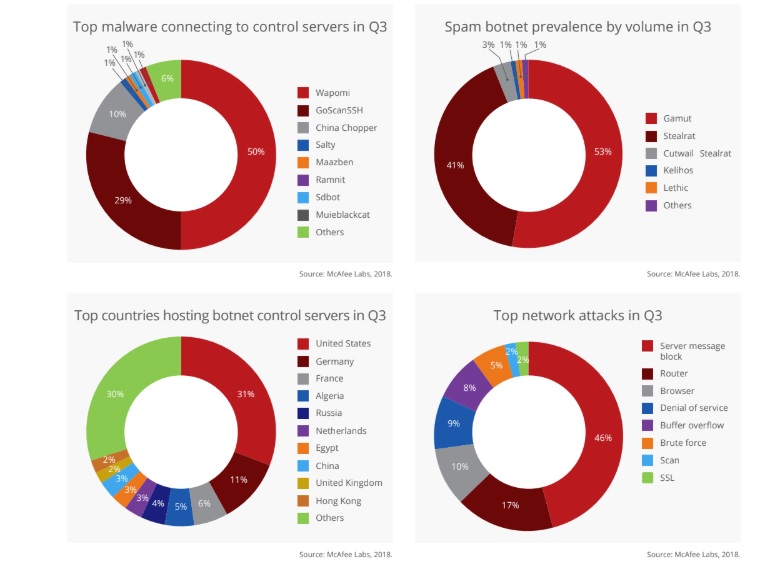 Above: Drilling down on Q3 cyber threats.

IoT devices such as cameras or video recorders have not typically been used for cryptomining because they lack the processing power of desktop and laptop computers. However, cybercriminals have taken notice of the growing volume and lax security of many IoT devices and have begun to focus on them, harnessing thousands of devices to create a mining supercomputer.

McAfee researchers observed a new malware family, CamuBot, targeting Brazil in Q3. CamuBot attempts to camouflage itself as a security module required by the financial institutions it targets. Although organized cyber gangs in Brazil are very active in targeting their own population, their campaigns have been crude in the past. With CamuBot, Brazilian cybercriminals appear to have learned from their peers, adapting their malware to be more sophisticated and comparable to that on other continents.

New mobile malware decreased by 24 percent. Despite the downward trend, some unusual mobile threats appeared, including a fake Fortnite “cheat” app and a fake dating app. Targeting members of the Israel Defense Forces, the latter app allowed access to device location, contact list, and camera and had the ability to listen to phone calls.

New macro malware increased by 32 percent, growing 24 percent over the past four quarters.

Some 53 percent of spam botnet traffic in Q3 was driven by Gamut, the top spam-producing botnet spewing “sextortion” scams, which demand payment and threaten to reveal victim browsing habits.