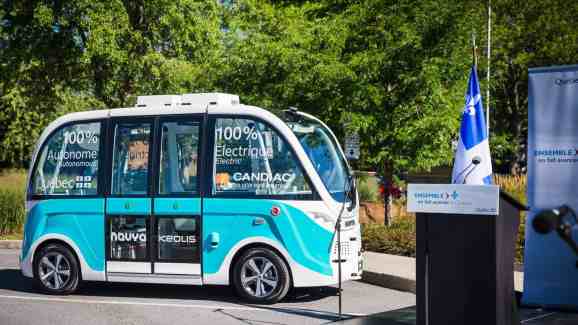 French tech hopeful Navya appears to have hit a wall less than six months after being listed on the Paris Stock Exchange.

The autonomous shuttle company has parted ways with founder and CEO Christophe Sapet two weeks after he disclosed that the company would fall well short of its 2018 revenue targets. In addition, four board members have stepped down, including those representing investors Valeo and Keolis.

In a statement to tech blog Maddyness, the board said the members‘ decision to leave was not a sign of doubts about the “operational or technical projects conducted with Navya, and in particular the partnerships put in place.”

Still, the upheaval comes as a blow to a company that has often been held up as a shining star in the French Tech ecosystem.

Founded in 2014, Navya makes autonomous shuttles that have been drawing international attention thanks to numerous pilot projects, including several in the U.S. Last year, the company unveiled a level 4 autonomous taxi that pointed to big things ahead.

Along the way, the company, now with 200 employees, raised an impressive $73 million in venture capital. In late July, Navya entered the Paris Stock Exchange with a first-day close of $8.16 per share. At the time, the company said it had sold 67 shuttles in 16 countries through the first quarter of 2018 and had booked $11.4 million in revenue for 2017.

But on December 7 it revealed that things were not going as hoped. Rather than hitting its $34.22 million revenue target for 2018, the company said annual revenues would likely be in the $19.4 million to $21.7 million range. Its stock plunged, cutting its market cap from $211.04 million last summer to $61.6 million in early trading today, with the stock price hovering around $2.26 per share.

Navya blamed the shortfall on several projects that were under negotiation but had been pushed into 2019, in part due to a fuzzy U.S. regulatory picture.

Just how big of a setback this will be remains to be seen. The company is searching for a permanent successor, but CFO Frank Maccary will be the interim boss. Navya also said it still has $27.38 million in the bank and had recently secured a line of financing worth $34.2 million from the European Investment Bank.