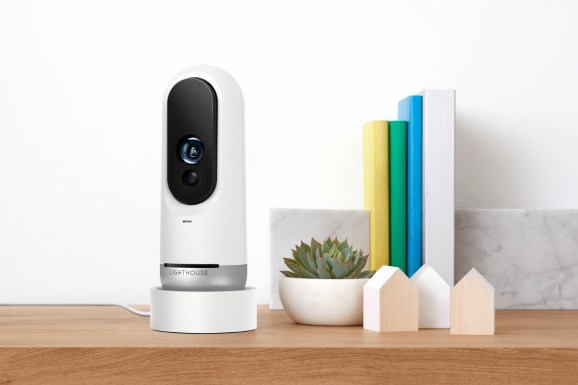 Lighthouse atop its mount. The device includes a camera visible in this shot. Above that is the 3D sensor and a night vision.

Lighthouse, a San Francisco home security startup backed by Andy Rubin’s Playground Ventures, today announced that it’s ceasing operations and extending refunds to customers who return their purchases. In a message on the company’s website, CEO Alex Teichman cited a lack of “commercial success” as a contributing factor.

“Unfortunately, we did not achieve the … success we were looking for and will be shutting down operations in the near future,” he wrote. “We remain strong believers in a future with AI at your service, and look forward to inventing that future with you.”

Lighthouse emerged from stealth in May 2017 with $17 million in funding from Playground, in addition to Eclipse Ventures, SignalFire, Start, and individual investor Sebastian Thrun, director of the Artificial Intelligence Laboratory at Stanford University. The three-year-old company, which employed around 30 people and had offices at Playground Ventures’ incubator space in Palo Alto, developed a security camera that leveraged computer vision not only to detect and monitor activity within a home, but to alert users to disturbances — like a break-in, for example, or unruly pets and kids — via text or voice message.

Lighthouse’s eponymous camera was equipped with a microphone and speaker that allowed owners to patch in and speak to people within earshot, but it lacked any sort of smart assistant functionality. It did, however, boast a natural language processing component that responded to both voice and text commands, allowing users to search through a history of recordings quickly.

Moreover, somewhat uniquely, Lighthouse had a time-of-flight sensor that enabled it to generate a three-dimensional map of its surroundings. Development of its depth detection system was spearheaded by Lighthouse cofounder Hendrik Dahlkamp, who worked at Google parent company Alphabet’s X research division and was a member of the team that won the DARPA Grand Challenge for autonomous vehicles.

Much like cameras from Nest and Ring, Lighthouse stored footage in the cloud. That footage will be deleted when service ceases on January 15, but the company is offering users the chance to export their content in the interim weeks.