Earnin, a startup that aims to help employees beat the “rigid paycheck” system and gain instant access to their earnings, has raised $125 million in a series C round of funding from existing investor Andreessen Horowitz, alongside its recently announced Cultural Leadership Fund, as well as Spark Capital, Matrix Partners, DST Global, March Capital Partners, Coatue Management, and Ribbit Capital.

Founded in 2012 as Activehours, Earnin rebranded last October to a name that “better captured our purpose,” company founder and CEO Ram Palaniappan said at the time. The name change came a month after Earnin had raised its $39 million series B round that was led by Andreessen Horowitz.

Earnin is one of a number of startups designed to help workers unlock their earnings without having to wait days or weeks for their next paycheck. Reports suggest that more than three-quarters of U.S. workers live paycheck to paycheck, which means millions of people don’t have a safety net to cover unexpected expenses.

Traditional payday loan fees can be astronomical, as lenders prey on people facing emergency expenses or those struggling to cover basic living costs. This is why legislation to bring greater restrictions to the sector is in the works, but it’s also why there has been an uptick in technology companies looking to bridge the gap between people’s paychecks and the bills they owe.

A few months back, a budgeting app called Even raised $40 million to show you how much money you can safely spend at any given time, and it also offers an “Instapay” service that allows staff to access earnings before their paycheck arrives. A company called PayActiv recently raised $20 million for a similar proposition.

There is a concerted push, it seems, to put predatory payday lenders out of business. 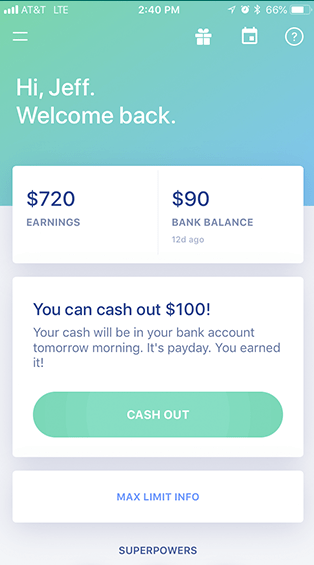 To access Earnin’s service, users must first connect their bank account and enter their employment information — the company has deals with a number of payroll providers to help manage payments. Workers can then decide how much of their paycheck they want at a given time — after they finish a shift each day, for example. When payday arrives, Earnin automatically takes back the pre-paid amount from the user’s bank account.

There are limits in place. Most users can withdraw up to $100 for each pay period, though this can rise to $500 once a worker has built sufficient trust over time.

Earnin also has to verify that workers completed the hours they were scheduled to work. Its verification systems require hourly contractors to submit photos of timesheets, while salaried staff can activate GPS location-tracking so Earnin can see where they were for a specific period of time.

This all leads us to one question, though. What’s in it for Earnin? It must take a percentage of something somewhere along the line, right? Well, not really. The company pitches itself as “100 percent community supported,” and it only makes money from tips that a user chooses to give. In truth, that doesn’t really sound like a sustainable business model for a startup that has raised nearly $200 million in private funding, but for now that is exactly how it makes money. And with a fresh $125 million in the bank, it plans to grow its team and business across the U.S.

“We’ll continue to shine a spotlight on unfairness,” Palaniappan said. “Our work doesn’t end with the pay cycle. We will expand our team and develop new partnerships, but most importantly, continue to drive awareness around the financial challenges faced by so many Americans.”

It’s worth noting that Earnin also pitches a “pay it forward” feature that invites workers to leave a bigger tip — when they can afford it — to cover someone who can’t. And this system is also being used to support causes — for example, the company said the Earnin “community” helped fellow members in evacuation zones during the recent hurricane season by covering fuel costs.

Earnin has gained notable traction already, claiming workers from some 50,000 U.S employers, including Apple and Starbucks.