Grip strength can reveal a lot about a person — including whether a neurodegenerative disease is about to set in and how far it has progressed. In a study published in the journal Scientific Reports, researchers from IBM describe a wearable system — a “fingernail sensor” — that measures how a person’s fingernail bends and moves continuously (a key indicator of grip strength), and machine learning models that can derive health state insights from those metrics.

As study coauthors Stephen Heisig and Katsuyuki Sakuma point out in a blog post, grip strength is associated in medical literature not only with the effectiveness of medication in Parkinson’s disease patients, but with people’s cardiovascular health, overall cognitive function in schizophrenics, and “all-cause mortality” in geriatrics. Fingernail monitoring is ideal for elderly patients, they claim, who risk infection from alternative options, like skin-based sensors.

“The project began as an attempt to capture the medication state of people with Parkinson’s disease … The majority of people with Parkinson’s are older, an age group with increasingly brittle, friable skin,” Heisig and Sakuma wrote. “By pushing computation to the end of our fingers, we’ve found a new use for our nails by detecting and characterizing their subtle movements.”

Fingernails provide a valuable structure for the body’s somatosensory system, as it turns out. As people move through the environment throughout the course of a day, neurons on the tips of their fingers act as near-constant sources of pressure, temperature, and texture feedback, leading them to interact with objects in somewhat repetitive, predictable ways.

This insight led the  team “to believe it might be possible to derive … signals from how the fingernail bends,” Heisig and Sakuma wrote.

So they built a system of strain gauges — sensors that measure the amount of strain on an object — that they affixed with adhesive to the fingernails of study subjects, along with small computers that sampled strain values recorded by those gauges. In addition to the strain gauges, the sensor packages contained a microcontroller with a wireless antenna board, a silicon prosthesis, an accelerometer board, and a coin battery.

As the aforementioned computer collected data, it communicated with a smartwatch (an Apple Watch Series 3), which sent the info on to a paired iPhone (via Bluetooth) and subsequently to cloud-based machines for retention, analysis, and model training. Locally, inference models correlated the data with three well-established symptoms of Parkinson’s disease: bradykinesia (slowness of movement), tremor, and dyskinesia (abnormality of voluntary movement).

One of the fingernails’ functions is to focus fingertips on objects being manipulated — fingernails slightly bend and move when they’re used for gripping and grasping, and even when fingers are merely flexed and extended. It’s a movement that’s tough to see with the naked eye, the researchers say — usually in the order of single-digit microns, less than the length of a typical human hair (between 50 and 100 microns across) or a red blood cell (less than 10 microns across). But the device’s strain sensors are sensitive enough to capture those bends and other minute changes in orientation, direction, and force of interactions. 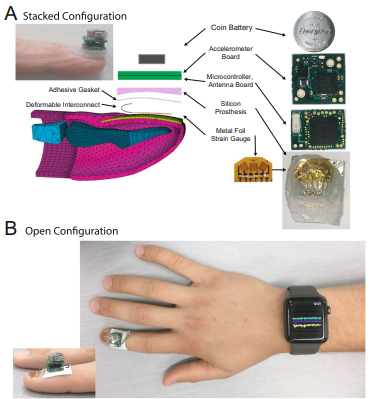 Above: A view of the fingernail sensor’s hardware stack.

In tests, the sensor package and machine learning models managed to differentiate activities involving pronation — downward rotations of the palm — and supination — upward rotations — such as turning a key, opening a doorknob, and using a screwdriver. They even predicted with 94 percent accuracy which digits wearers were writing as they used a pen and paper.

The study’s authors believe the system could serve as the foundation for a future wearable that’s “entirely on the nail” and capable of characterizing various kinds of gestures, which they say might be used to perform operations like scrolling, paging, shrinking, or expanding images on a smartphone or PC. In the short term, hardware improvements will focus on shrinking the electronics using “wafer-level chip” scale packaging, switching to a flexible substrate, and reducing power consumption. 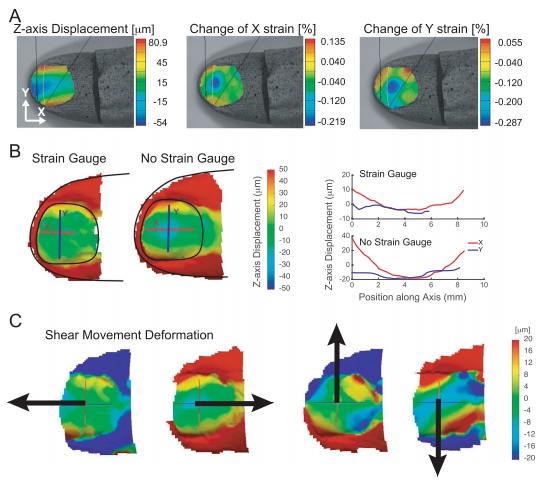 Above: Fingertip surface profile measurements from the sensor.

“With the sensor, we can derive health state insights and enable a new type of user interface,” Heisig and Sakuma said. “This work has also served as the inspiration for a new device modeled on the structure of the fingertip that could one day help quadriplegics communicate.”