It’s New Year’s Eve, and if you live in the States, there’s a good chance you’ll spend the final minutes before midnight watching a 12-ton bright, glowing geodesic dome descend from a 141-foot flagpole in Times Square. New Yorkers have been ringing in the New Year with fireworks and a giant crystal ball since 1907, when Adolph Ochs, owner of the New York Times, commissioned Artkraft Strauss to design a display to commemorate the newspaper’s gleaming new headquarters.

In the intervening years, the Big Apple has become one of the world’s most popular destinations for consuming copious amounts of bubbly, attempting a few verses of “Auld Lang Syne,” and swimming through a flood of balloons and confetti. More than a million people are expected to descend on the city this week to participate in the festivities, up from the 500,000 folks who flew in back in 1998. The first trend the scientists discovered? The tourist-to-local ratio wasn’t as disproportionate as might be expected. Out-of-towners outnumbered New York City residents almost 2:1 in Times Square, but roughly 25 percent of New Year’s Eve partygoers lived in the city. Both groups arrived hours early; Placer says that last year Times Square reached peak capacity by 9 p.m. ET, with most people having come by 6 p.m.

Above: Times Square foot traffic on New Year’s Eve 2017, according to Placer.ai

Times Square wasn’t the only place hopping come sundown December 31, 2017. Chelsea was the top spot for clubs and bars, and a “big favorite” among locals, according to Placer — perhaps because of the Phish concert at Madison Square Garden. (Phish is scheduled to make an appearance this year, too.) About 41 percent of visits were to nightlife spots, while 30 percent were to restaurants. Above: Pedestrian traffic in Chelsea during New Year’s Eve 2017.

What about the most popular place to dine year-end 2017? That’d be Gramercy and Flatiron. Placer reports that most native New Yorkers preferred Gramercy — 44 percent of visits in the area were to celebrated restaurants like Eleven Madison Park, Cosme, and Gramercy Tavern. 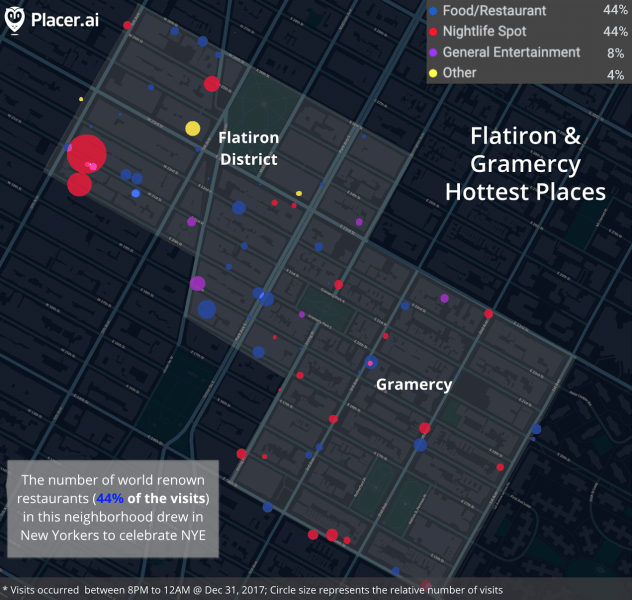 Above: Gramercy and Flatiron were where a majority of New Years Eve 2017 partiers ate out.

But when it came to nightlife traffic, the Lower East Side was the place to be. Residents were the most likely to ring in 2018 locally, according to Placer, and 64 percent of neighborhood visits were to nightlife spots. Above: The Lower East Side was the place to be for nightlife during New Year’s Eve 2017, according to Placer.ai.

“Now,” Placer wrote in a blog post, “we can finally end the debate about which neighborhoods are best for your particular brand of celebration.”