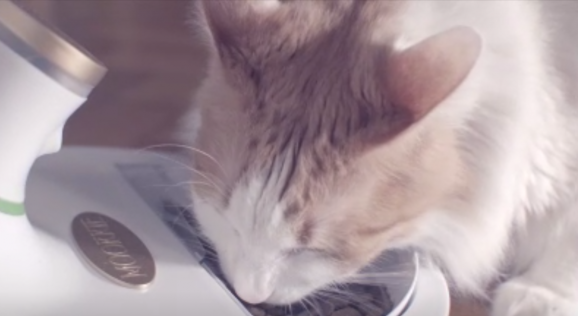 A smart cushion that keeps tabs on your furry friend’s fitness was all the rage last year, as were robot petsitters, telemedical apps for cats and dogs, and other tech-centric pet accessories. But leave it to Volta, a Milan designer of connected home appliances and industrial apps, to reinvigorate the category with a pet bowl — Mookkie — it says is driven by artificial intelligence (AI).

Mookkie, which will make its formal debut at the 2019 Consumer Electronics Show in Las Vegas next week, features a built-in camera with a fisheye lens, an IR sensor, and an embedded circuit board that automatically detects pets. If a recognizable face — or muzzle, rather — comes within range of its sensors, a mechanical panel rotates open to reveal the feed compartment. Better still, Volta says that Mookkie’s embedded deep neural network can distinguish between individual pets — preventing, say, Fido from overfeeding, or a wild animal from stealing your good boy’s dinner.

In those respects, Mookkie is not unlike Furbo‘s connected dog camera, which similarly taps a camera, machine learning algorithms, and a food-dispensing mechanism to capture pet selfies or alert you when potentially dangerous activity is detected. Petcube, too, helps monitors pets with the aid of a wide-angle camera and a two-way speaker system, as does Petnet’s SmartFeeder.

But Mookkie boasts some quality of life improvements that the competition doesn’t, such as a magnetic system that centers the feed bowl during repositioning and an ergonomic, patent-pending polypropylene housing that’s both “easy to grasp” and “stylish.” (Volta says that the polycarbonate feed flap is resistant to chemical agents that might harm cats or dogs.)

Mookkie connects to a local network over Wi-Fi, and communicates with a smartphone companion app to notify you (or send a short video) when doggo’s about to munch. And like so many other “smart” products on the market these days, the AI-driven pet bowl works with voice assistants like the Google Assistant and Alexa. A series of simple commands is all you need to control the feed bowl’s latch, get the skinny on served meals, and order food when it’s running low.

CEO Silvio Revelli says that Volta is targeting a $189 price point, and expects the AI-powered pet bowl to go on sale by the end of 2019 on the official Mookkie website. The plan is to let owners customize the colors and engrave their pet’s name.

“At Volta, we consider AI to be the new electricity,” he said. “We firmly believe that every product or service will eventually contain an AI aspect, which is why we provide our customers with this capability. … Mookkie is the living demonstration that we can place AI in almost every product, evolving its use experience through AI.”