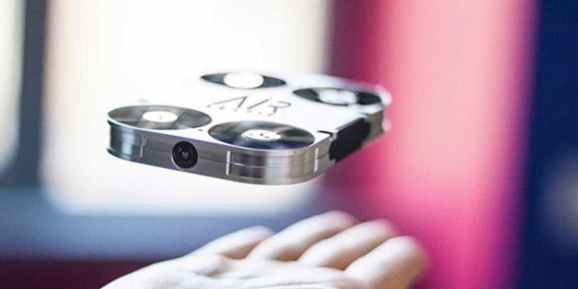 Pocket-sized drones are the new selfie stick — if selfie sticks had tiny propellers and obstacle avoidance systems, that is. AirSelfie Holdings, a team of developers and engineers hailing from Shanghai and Italy, introduced three new aerial cameras at the 2019 Consumer Electronics Show: the Air 100, Air Zen, and Air Duo.

“When it comes to aerial photography with AirSelfie, the sky is definitely the limit,” AirSelfie CEO Stefano Cabella said in a statement. “AirSelfie is the first and only true air camera that allows you to be naturally and completely immersed in your everyday life or life adventure while AirSelfie records your experiences.”

First up is the $100 Air 100, AirSelfie’s new entry-level offering. Its 12-megapixel camera captures HD video, and the drone’s battery provides up to six minutes of flight time on a charge.

The $140 Air Zen is a bit more technologically sophisticated. It boasts a water-resistant carbon-reinforced body and a built-in 13-megapixel camera with a 120-degree field of view that shoots in 4K. Notably, the drone is the first to feature AirSelfie Holdings’ Flight System, which enables it to follow subjects while airborne.

Lastly, for drone pilots who want it all, there’s the dual-lens Air Duo. The $230 aluminum alloy quadcopter — which, like the Air Zen, taps the Flight System for autonomous photography — has a 12-megapixel camera with an 80-degree field of view, and a second 12-megapixel wide-angle (110-degree) camera. Its removable battery lasts an average of seven minutes.

All three new AirSelfie drones can be controlled with a new companion app, which also made its debut at this week’s conference. It allows budding videographers to capture, edit, view, and share content from an Android or iOS device wirelessly, without having to tether to the drones physically.

The Air 100, Air Zen, and Air Duo will go on sale later this year. Launch specifics are forthcoming, but AirSelfie Holdings said it plans to expand product availability beyond the U.S. and Canada to Sweden, Finland, Greece, and nearly half a dozen other countries by the end of this year.