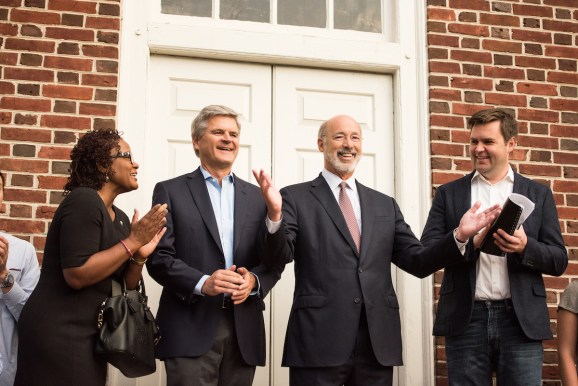 Revolution's Steve Case (second from left) and J.D. Vance (fourth from left) during a 'Rise of the Rest' stop in York, Pennsylvania

Last year, AOL cofounder Steve Case’s Rise of the Rest venture closed a $150 million seed fund to invest in startups in cities that have historically been overlooked — places like Cincinnati, Memphis, and Salt Lake City. $150 million funds don’t usually get write-ups in the New York Times, but Case’s did. That’s because the Rise of the Rest fund’s LPs are prominent executives like Jeff Bezos, Eric Schmidt, and Sean Parker.

Name recognition alone made the new seed fund one of the year’s most-talked among Heartland-based startups and investors. Ultimately, the fund’s goal is not just to deploy seed capital, but to create a network that startups can tap into at scale. That way, startups in Middle America can more easily access the resources they’ve traditionally lacked — particularly follow-on capital and technical talent.

It’s still too early to tell if Rise of the Rest will succeed in that endeavor. But it’s worth looking at the seed fund’s first year of investments to see where it is focusing its efforts.

As of today, there are just over 100 portfolio companies in the seed fund, representing just over 30 states. Not all of those investments were made this year — about 40 of the included portfolio companies were winners from the fund’s past “Rise of the Rest” tours. Case and his team have hosted startup pitch competitions in cities across the U.S. over the past several years, with the winning company receiving a $100,000 investment from Case.

A handful of others stemmed from investments Case made several years prior at Google for Entrepreneurs’ annual Demo Day. Still, in a conversation with VentureBeat at the end of December, Case estimated that the seed fund has been averaging about one new investment per week this year.

When the seed fund was first announced, managing director JD Vance told VentureBeat that Rise of the Rest wouldn’t lead any rounds, its checks would be smaller than $1 million, and it would be “industry agnostic.” These are some of the reasons the team has been able to invest at such a breakneck speed.

Based on the group of portfolio companies listed on Rise of the Rest’s website, its largest share of investments — roughly 15 percent — come from the Washington, D.C.-Baltimore metro area. That’s not too surprising, given that the VC firm the Rise of the Rest fund is a part of, Revolution, is headquartered in Washington, D.C. Even a VC firm that wants to invest all over the country is still disproportionately plugged into what’s happening in its own backyard.

Case told VentureBeat that the fund wants to remain open to diverse industries because cities have different industrial strengths — Washington, D.C. is stronger in life sciences and Indianapolis has a growing B2B software sector, for example. The idea is to bring in a lead investor with industry expertise while Rise of the Rest focuses on making connections with other entrepreneurs and investors.

“What we’re doing then is … helping them on their storytelling, communications side, helping them in terms of the platform services that we provide,” Case told VentureBeat.

To that end, Rise of the Rest this year launched a job board featuring open positions from its portfolio companies. The hope is that tech talent that migrated to the West Coast and wants to move back to the South or Midwest will use the board to see what companies are hiring in their cities.

Playing into its desire to be thought of as a “connector” for so-called Heartland startups, the fund also announced this year that it was bringing on two new partners to make real estate investments in Rise of the Rest cities.

“Even three or four years ago, when we were traveling around … in different cities we visited [we were seeing] interesting neighborhoods that were essentially being revitalized because of the role of startups,” Case told VentureBeat. “[Investing in] mixed use and coworking space and apartments and things like that will end up making it easier for companies to start and scale.”

Case said that one challenge the Rise of the Rest team encounters — that they’ve tried to address in meetings with entrepreneurs and investors — is that entrepreneurs in smaller startup markets face more pressure from investors to sell their company early. This means they’ll probably sell before generating the eight- or nine-figure exits that can draw more money back into the startup ecosystem. But Case said some startup news in 2018 has helped challenge that mindset.

“Some of the more recent things, like an $8 billion exit from Qualtrics, a [nearly] $3 billion exit from Duo Security in Ann Arbor — these things are helpful in terms of getting people’s attention,” Case told VentureBeat.