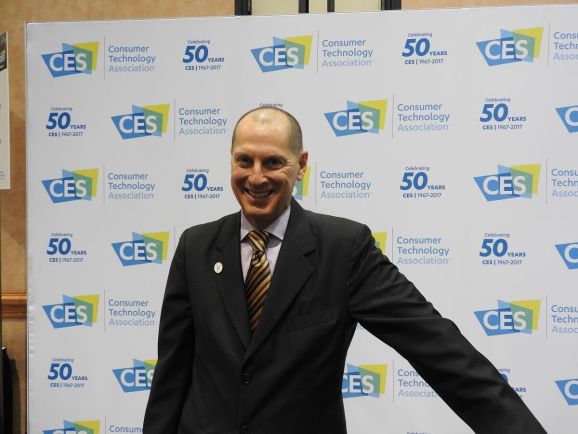 Gary Shapiro, head of the Consumer Technology Association, said that about 165,000 people are attending CES 2017.

In its annual report, the Consumer Technology Association, which hosts CES, projected the industry will post $398 billion in revenue in 2019. That would be a 3.9 percent year-over-year increase from 2018, or about $15 billion.

That might not seem so bad, except that last year the Consumer Electronics Association, which renamed itself the Consumer Technology Association, started including services such as music and video streaming. The CTA report notes that spending on media streaming will account for about $5.2 billion of that projected increase for 2019, or about one-third.

Back out streaming, and the hardware industry — supposedly in the midst of a mega-connected-everything-is-AI renaissance — is looking at closer to 2.5 percent in growth.

A big chunk of that still comes from the industry’s real bread and butter: smartphones. At $80 billion projected for 2019, that basically represents almost 1 out of every 5 dollars people will spend on gadgets this year.

But as has been well reported, the smartphone industry is losing steam. While CTA projects sales will be up 2 percent for smartphones in 2019, that’s mainly because the big names are selling their flagships for more money. Unit sales are expected to increase only 1 percent.

Laptops and TVs, two of the next biggest categories, are expected to grow 3 percent and 2 percent, respectively.

The problem is that while other categories, such as smart speakers, are projected to grow faster (at 7 percent year-over-year), they remain relatively small (at $3.2 billion in annual revenue). More troubling in terms of future revenue growth for this otherwise hot category of hardware, the report notes: “Although adoption is slowing due to rapid voice integration in other devices, such as TVs, smart home devices, and other audio products, smart speakers remain a category to watch as consumers embrace the benefits of AI in their home.”

Growth is also expected in areas like wireless earbuds, drones, and smart home devices, all in the 4 percent to 44 percent range. But these also remain small categories relative to smartphones and TVs.

As for all the noise over various other doodads unveiled this week, consumers will largely just shrug them off while continuing to replace their existing devices. They might add a new one here or there, but nothing earth-shattering in terms of spending.

The press release for the report also doesn’t get into which categories are flat, or shrinking. And it doesn’t really explain why consumers aren’t more enthusiastic, considering the obscene sums being spent to develop and market all this stuff.

But it does offer one other fun, ominous warning at the end:

“Multi-year projections cannot account for unpredictable factors such as changes in trade laws, interest rates, and federal policy. Any escalation in the trade dispute with China and potentially steeper tariffs would present significant headwinds to CTA’s forecast.”

Yikes! Better grab that extra glass of free champagne in Vegas while these tech companies can still afford it.