Qualcomm and Ford said today they will start deploying cellular vehicle-to-everything (C-V2X) technology for emergency warnings and other automotive purposes in 2022.

At CES 2019, Ford demonstrated a car with the capability, using C-V2X chips from Qualcomm. Patrick Little, senior vice president and general manager of automotive at Qualcomm, said at the company’s press event at CES 2019 (the big tech trade show in Las Vegas this week) that C-V2X can head off a lot of problems with local communications between vehicles or between vehicles and road signs.

For instance, if someone hits the brakes on a freeway and you can’t see it because it is two cars ahead of you, the C-V2X radio can communicate directly from the car doing the braking to the cars behind it within a short range. From there, alerts can be flashed to the drivers of the cars behind to slow down.

Alerts can also be sent between pedestrians and cars. 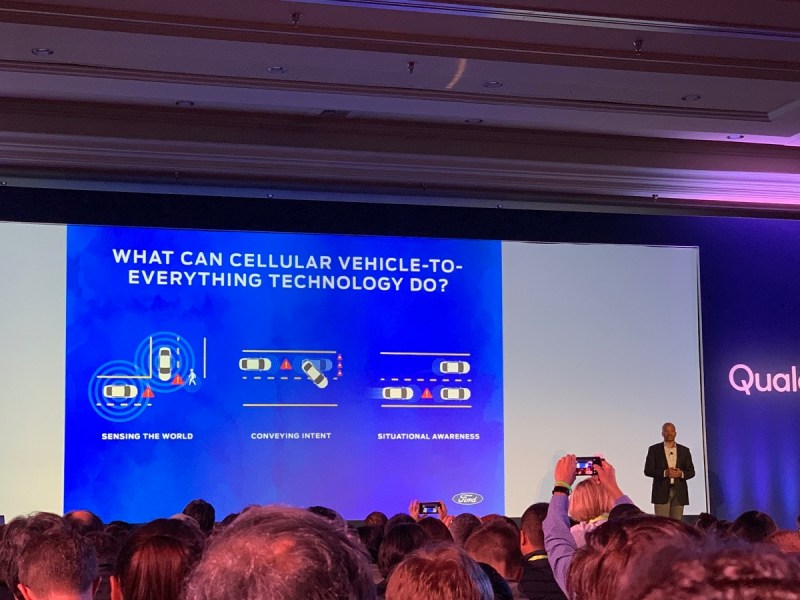 Above: How C-V2X can improve safety.

Don Butler, executive director for connected vehicle platform and product at Ford, said that the technology has the potential to save lives and prevent accidents. C-V2X technology could be used to spot a vulnerable pedestrian on the side of a road, or a possible collision at a blind intersection.

One of the places that will feature the technology is the Las Vegas Strip, thanks to an agreement with the city of Las Vegas. The C-V2X coalition 5GAA, first started in 2016, now has more than 100 members, with demos underway at Mercedes, Ford, and Ducati.

The wireless tech operates in the ITS 5.9Ghz part of the spectrum, operating independently of a cellular network.

“Qualcomm added more proof it’s a player with C-V2X demos with Audi, Ducati, and Ford,” said Patrick Moorhead, analyst at Moor Insights & Strategy, in a statement. “C-V2X is the kind of complex, interrelated problem that the company has been successful with in the past. What I like best about Qualcomm’s auto play is that is leverages almost every investment already sunk into smartphones, so its very low risk and very affordable.”