“Just by walking into a room, the information that’s relevant to why you’re there is served up to you, popping up on any device or nearby surface,” reads the press release.

The company also promises that salespeople will be able to pull intelligence from the platform via simple voice queries, such as “How many new social media followers did we get in Q3?” And it says that hovering over a highlighted company or contact name in an email, website, or applications like Salesforce will serve up a “HyperCard” — a digital card containing key data about customers, products, and people, as well as a suggested next action. 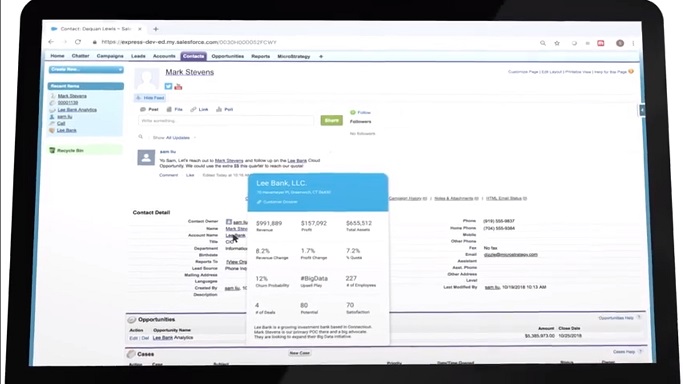 MicroStrategy sees this launch as a remake of traditional analytics, with the platform now able to know where you are and what information you want and to deliver that information with minimal human effort.

“Information about customers, products, and employees naturally surfaces — with zero clicks — at a glance on a screen, by voice, or even through the lens of a camera,” said CEO Michael Saylor.

“For the first time, business users don’t have to look for answers — answers come to them,” CTO Tim Lang said in the release, calling the updated platform “the biggest breakthrough in analytics in over a decade” and “the richest, highest-quality release we’ve ever shipped to market.”

In addition to the new HyperCard functionality and APIs to integrate with Amazon Alexa and other voice-controlled applications, MicroStrategy 2019 includes an Enterprise Semantic Graph to enable real-time location intelligence.

It runs natively on Microsoft Azure and AWS, and new integrations for R and Python are available to allow data scientists to publish results back into MicroStrategy without leaving their preferred environments.