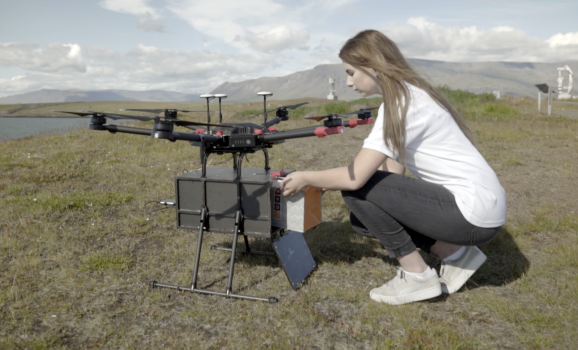 Delivery by drone is big business — potentially in the neighborhood of $29.06 billion by 2027, according to analysts at Research and Markets. It’s no wonder heavy hitters like Google X labs graduate Wing and Amazon are making sizable investments in the technology, in part by piloting drones deliveries in Australia, the U.K., and soon Helsinki. And they’re not the only ones.

Six-year-old Israeli startup Flytrex, which in 2018 deployed what it claims is the first “golf course delivery system” in the U.S., today announced that it has secured $7.5 million in Series B financing, led by Benhamou Global Ventures, with additional investment from Btov. This follows a $3 million Series A funding round in June 2017, bringing the company’s total raised to $10.5 million.

The fresh capital comes after the debut of Flytrex’s aerial mail delivery program in Ukraine, and its partnership with online marketplace Aha in August 2017 to roll out an on-demand service in Iceland’s capital city of Reykjavik. More recently, in September 2018, Flytrex kicked off the aforementioned golf course delivery program in North Dakota at King’s Walk.

Flytrex CEO and cofounder Yariv Bash said the capital will be used to scale up operations and improve the company’s existing drone delivery services. It’ll also provide seed funding for Flytrex’s North Carolina program, which will launch later this year.

“Drone delivery is taking off, and we are delighted that BGV and Btov will be joining us in making drone deliveries a global reality,” Bash said.

The thing that sets Flytrex apart from the competition, Bash contends, is its delivery mechanism. Dubbed InAir, the patented wire-drop system employs a tethered cord that gently lowers packages to the ground after delivery recipients confirm their proximity on Flytrex’s app.

At King’s Walk, for example, patrons select menu items from the nearby Eagle’s Crest Bar & Grill from within Flytrex’s app. They then choose from a list of geofenced drop-off sites and place their order, after which the clubhouse preps the order, packages it, and hands it off to a Flytrex technician. Next, the drone — with the order in tow — flies to the designated pickup zone, remaining airborne until the intended recipient confirms they’re nearby.

“This investment is a vote of confidence in Flytrex’ ongoing success propelling the drone industry forward and in our vision of making UAV delivery the rule, rather than the exception,” Bash added.

To remain compliant with the U.S. Federal Aviation Administration’s (FAA) Rule 107, which prohibits the use of commercial drones within 500 feet of “non-participating” people and structures, Flytrex’s drones remain within line of sight and fly over routes without people below. They also provide real-time status updates via the app.

Efforts are underway to loosen those restrictions. In May 2010, the U.S. Department of Transportation named a handful of states — including North Dakota and Tennessee — that will join the government’s UAS Integration Pilot program, which aims to establish traffic management systems that can handle commercial drone traffic.

Flytrex’s Holly Springs, North Carolina expansion builds on a pilot last year that was conducted with the state’s Department of Transportation to test deliveries from restaurants to businesses. As with Flytrex’s North Dakota deployment, the drones will, once they launch broadly in the city, operate within line of sight. However, Flytrex hopes to eventually also operate them at night and over people.

Competitors are hot on Flytrex’s heels. In May, Uber announced plans to deliver food by drone in San Diego, and local authorities cleared Alibaba’s Ele.me to use drones to deliver meals along 17 routes in Shanghai’s Jinshan Industrial Park. Microsoft will conduct undisclosed tests in Kansas, meanwhile, and FedEx will develop a drone-powered aircraft inspection program in Tennessee.