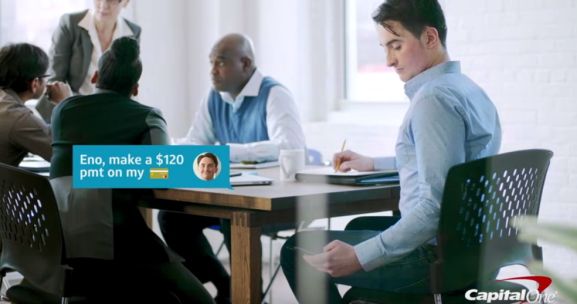 User experience (UX) is overtaking price as the competitive differentiator. And now AI-powered UX design means you can craft those unique, relevant, and engaging experiences consumers are looking for. To learn more making AI the foundation of your UX design, don’t miss this VB Live event!

Capital One is using AI to build a better UX, largely through the work they’ve been doing with Eno, their intelligence assistant, says Steph Hay, VP, Conversational AI Design & Integrated Experiences. Launched almost two years ago now at SXSW, the company has used AI at each touch point in the customer journey to create a much more hyper-personalized, contextually relevant experience.

It not seem huge at first, but the choice of character was an important starting place for Hay in terms of making the experience truly personalized. “We chose Eno very intentionally to be gender neutral,” Hay says. “That continues to be an important theme today, so that customers, when they’re interacting with Eno, can use their imaginations to form whatever kind of association with their assistant that they want. That was really important for us, to not reinforce existing gender stereotypes, especially in a space that’s as hyper-personalized as money.”

The team also decided to launch Eno in SMS, since texting is the most ubiquitous channel for customers from all kinds of backgrounds. According to Hay, 97 percent of customers with a smartphone text.

“There’s no demographic specialization there — both young and less young people, folks from every part of the country, every background, text,” she explains. “That’s already a better UX through channel selection.”

With the AI and their natural language processing (NPL) hyper-focused on the raw text, the team uses that data to understand how their customers feel and talk about and interact with money, or how they react when they’re given a contextual menu, versus when they’re given a traditional hierarchical menu like you might normally see in a UI.

“That’s a better UX too,” she says. “We’re reaching more diverse populations through our initial channel selection, and taking away some of the fidelity there to focus on the raw text of the conversation.”

And for the last two years, they’ve been building out Eno’s AI capabilities across a typical spending experience that customers will have. Eno recognizes when a customer is on an online checkout page, so that they don’t have to give up their actual credit card numbers to online retailers. As they’re going through life spending, Eno also recognizes when they may have tipped higher than usual at a restaurant or a double charge shows up on an account. Eno will alert a customer to make sure those payments were intentional. Once users have done their shopping for the week or the month and they’re ready to make a payment, Eno can send payment reminders and customers can pay over text — the payment experience is optimized to their past payment behaviors, and customers can even pay with an emoji now.

“What we’re doing is looking at patterns over time,” she says.  “We recognized this pattern: Is this purposeful or is it an anomaly? Customers appreciate the reassurance. We aren’t telling them something they don’t know. But they appreciate that we’re looking out for them. That’s the emotional reassurance that’s such a powerful outcome of AI in UX.”

There are benefits in hard ROI, Hay says. For example, applying NLP to the fraud experience. Previously, the system would text a Capital One customer and ask them to confirm or deny a particular purchase that was potentially fraudulent: Yes, I made that purchase, or no, I didn’t. They found that at the scale on which they operate, about 15 percent of the time, customers would text back something that was not confirm or deny: oh, my husband did that, or that was probably my kid.

“They would start to text us stories,” she says. “Things we couldn’t understand because our systems weren’t set up to process that natural language. In the fall, we ported that to Eno, who understands natural language. We went from an 85 percent understand rate to 99 percent, which saved millions of dollars for the business in literally weeks.”

She notes that there’s largely undiscovered ROI in customer retention, because AI is still no nascent, and we haven’t longitudinally seen the impact of really great contextualized experiences that respect somebody’s behavioral patterns, give them control, and acknowledge where they are emotionally — for example, how a company might handle a fraud use case with more information and clearer language than another use case with a less heightened level of emotional context to it.

“The companies that are able to balance those things — great data, control for the customer, presenting transparency about how we’re using that data  — with emotional resonance in that experience is going to show up in higher retention rates,” she says. “It’s going to show up in how we can attract and retain talent, because great designers and engineers and product managers and marketers are going to want to work for a company and with people that care about those things.”

“Screens just continue to be these fascinating learning objects,” she explains. “The brain welcomes them to process different types of information. Numbers are harder to understand through voice alone. A different part of the brain lights up when it’s hearing numbers. The onus, I think, on designers and conversational AI, becomes to maximizing the value of the UI rather than just maximizing the amount of content or the hierarchy of it.”

“That’s why integrated experience is part of my title and part of our mission,” she says. “They can’t be seen in isolation. That doesn’t create an experience. It doesn’t create cohesive experiences. I don’t think one is replacing the other. It’s an ecosystem that, if designed together and in complement to one another, will become hugely powerful.”

The number one thing to do, when moving toward integrating AI into your UX design is hiring a diverse team, Hay says.

It’s especially crucial because AI literally relies on needing to have a ton of good data in order to learn, Hays says. There’s a healthy tension between this massive big data challenge that AI requires in order to function and the human-centered design ideal of creating this nuanced, contextualized experience that is hyper-focused on one person: How do you use big data to serve one person?

“You want people who think in systems, people for whom English is a second language, people who study human behavior and emotional reactions during an experience, people who are not fixated on the UI in a static way,” says Hays. “Because it’s so nascent, we need to hire dreamers who think there’s a better way to design here, that’s more contextual, more colorful. They’re just nerdy enough and just practical enough to be able to make it happen with other nerdy, practical people. It’s not dreaming for the sake of dreaming, but being compelled by this.”