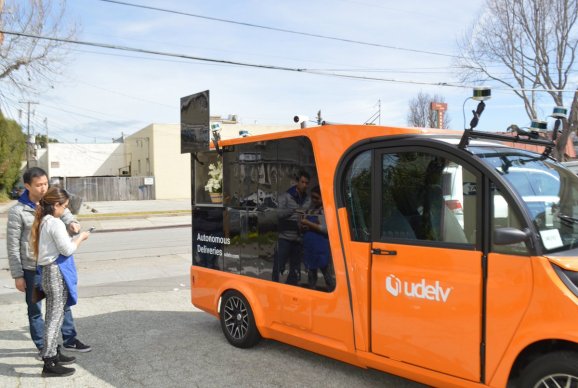 Udelv has had an eventful 2018 — and that’s putting it lightly. In September, the Carson, California autonomous car startup inked a deal with grocers in Oklahoma City to deliver perishables to select shoppers, and in the fall, it partnered with on-demand food startup Farmstead to ferry products between San Francisco Bay Area stores and customers. And just last month, it signed a deal with Texas-based auto parts distributor XL Parts to deploy its self-driving delivery vans in Houston.

This year, it’s really going to kick things into high gear. Today at CES 2019 in Las Vegas, Udelv unveiled a redesigned delivery vehicle — the Newton — that’s based on Baidu’s Apollo open source platform, and announced that Walmart stores in Surprise, Arizona will trial its self-driving vans for deliveries. Additionally, Udelv told press that it’s secured a strategic investment from Marubeni Corporation, which Udelv CEO Daniel Laury said will fuel its expansion to several U.S. states throughout in the coming months.

“We’ve tested and proven our capability to successfully address the delivery market for Americans,” said Laury, who revealed that the company’s vans have completed over 1,200 deliveries from florists, restaurants, bakeries, auto parts suppliers, and others on public roads in the Bay Area to date. “[We’re] now ready to work closely with America’s largest retailers to bring convenience and savings to hundreds of thousands of people.”

Toward that end, the Udelv Newton, which is built on a Ford Transit Connect chassis equipped with Velodyne’s new VLS-128 lidar sensor, features a patent-pending automated cargo space with an adaptive shelving mechanism that can accomodate various types of packages. It’s able to fit up to 32 customers’ orders at a time, according to Udelv..

As for its driving capabilities, the Newton is capable of Level 4 autonomous driving over short- and medium-range distances and can travel up to 60 miles per hour on urban and suburban roads, as well as highways. It’ll only approach that speed, however, when it’s within range of a store or distribution facility, and not in catchment areas larger than 400 square miles.

Newton was developed on the latest version of Baidu’s Apollo platform, Apollo 3.5, which confers a number of advantages. The vans are able to perform unprotected turns and navigate things like speed bumps, clear zones, side passes, and autonomous parking, and they’re compatible with newer navigational sensors from Velodyne, Argus, and Continental.

They also support the Apollo Extension Unit (AXU), which lets developers expand the system’s computational and storage capacities by plugging in accelerators such as GPUs, FPGA modules, and SSDs. Udelv says that, going forward, it’ll use future versions of the modules to build its own autonomous driving algorithms for “a range of delivery-specific situations.”

Udelv plans to deploy up to 100 Netwons in 2019 for customers who’ve already preordered them, and it says fleets will be deployed in San Mateo, California; Surprise, Arizona; and Houston, Texas during the first half of this year.

“With self-driving delivery vans, merchants and shippers will significantly lower their shipping and delivery costs as well as provide a superior customer experience,” Laury said. “The rapid deployment of [autonomous delivery vans] enables retailers to make cost-effective deliveries and improve customer experience. Udelv’s first-of-its-kind [van] will be a critical enabler of the growth of the e-commerce sector.”

Udelv’s Walmart trial — which comes shortly after Walmart and Ford jointly announced they’d explore delivery with autonomous vehicle technology, and after driverless vehicle startup Nuro inked a deal with grocery chain Kroger to deliver items to customers in Scottsdale, Arizona — will begin next month, and will initially involve human backup drivers “until both companies and regulators deem them approved for a safe removal of the safety driver.”

As with current and future Udelv deployments, delivery recipients will use a custom mobile app to place orders. Udelv says the app interface’s design, which was recently revamped, was informed by insights gleaned from the deliveries completed with Udelv’s previous-generation driverless van.

In the interest of safety, in addition to putting humans behind the wheels of its vans, Udelv says that it will employ a team of teleoperators to monitor their progress and take over in the event of an emergency. The remote monitoring and control infrastructure relies on cellular, Udelv says, and uses what the company describes as “advanced compression” technology and “carrier ranking” and load balancing to minimize latency.

“America’s leading retailers know to stay competitive and continue to provide outstanding customer shopping experiences, they need to stay ahead of the curve and lead the market with the adoption of new technology,” Laury said. “Walmart is a forward-thinking business that consistently invests in providing value to its customers and our trial builds on this commitment.”

Udelv may have a head start in the autonomous delivery market, but it’s competing with a raft of startups including Marble, Starship Technologies, Boxbot, Dispatch, and Robby. That’s not to mention Robomart, which recently announced plans to test its driverless grocery store on wheels; and Ford, which is collaborating with Postmates to deliver items from Walmart stores in Miami-Dade County.

If it’s to have any chance at nabbing a slice of the projected $11.92 billion global autonomous robot market, Udelv will have to substantially differentiate itself from the competition. With the Newton, it seems to be taking a step in the right direction.