When you think of the word wearables in a CES context, the image that typically comes to mind is of smartwatches — at this point, pretty iterative ones. There are the round digital ones; the round analog ones; the square, rounded square, and rectangular ones, each design set in stone years ago and little changed from show to show.

If I remember the 2019 CES for anything, it will be both the diversity of wearables on display and the fact that companies have lost all shame in placing them anywhere on your body — in your underwear, on your purse, or on your forehead. Sometimes, this proximity is a good thing. CES producer CTA put wearables exhibitors right next to health companies, and the lines between “health” and “wearable” are often so blurry that you need to really dive into the booths to see them.

Here are some of the bigger trends I saw within the wearables category at this year’s CES.

As a broad statement, smartwatches were yawn-worthy at CES. There were few major steps forward, unless you find the idea of a freeze-resistant watch interesting, in which case you might want to check out the lineup from Suunto. They showed a working watch frozen in an actual block of ice. 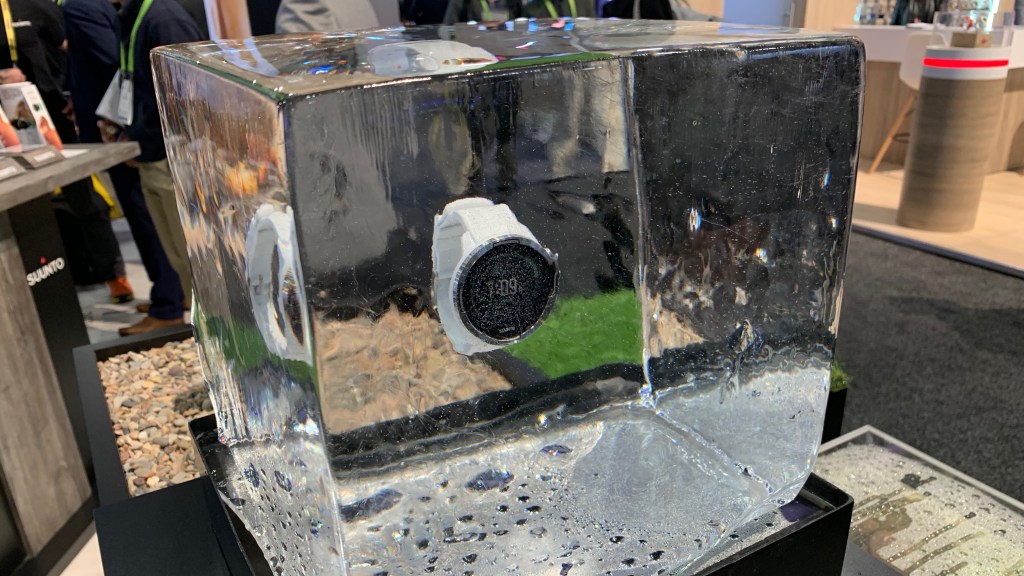 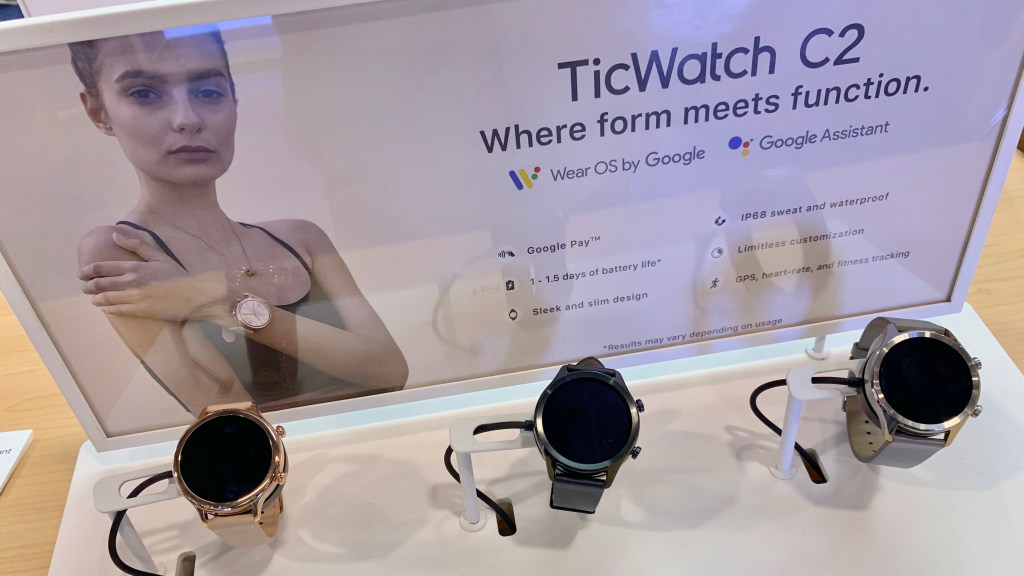 One of the most distinctive booths I spotted was One61 Studio’s, which spotlighted classic Batman-themed smartwatches that reskinned their entire interface with Batman references — activity challenges based on “crime fighting” led to rewards of content from the caped crusader’s gallery of rogues. One61 also had Wonder Woman, Fallout 76, and Rick & Morty themed watches on display. 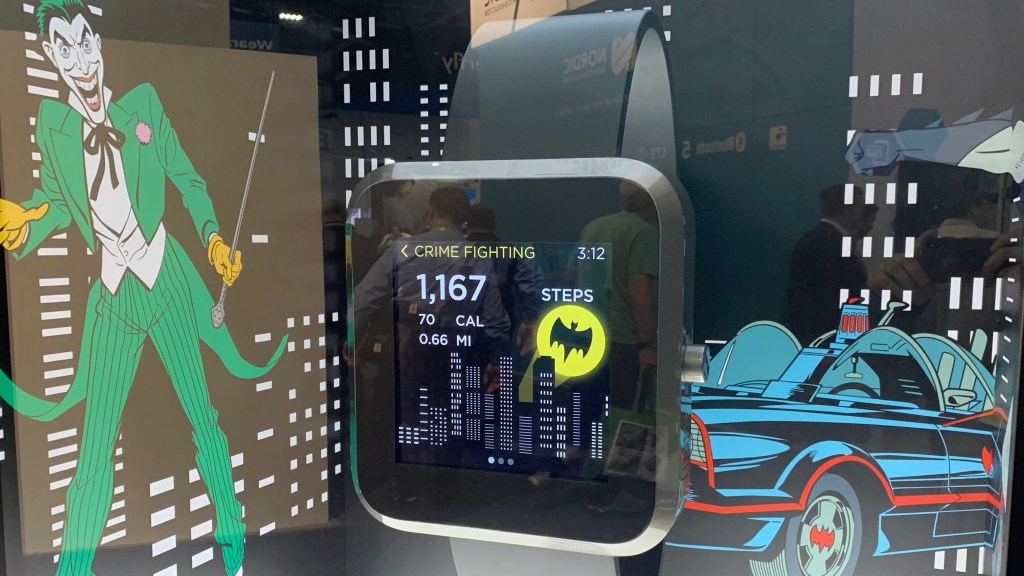 Purses as a new kind of wearable

Pretty soon, you won’t have to wear a screen on your wrist. Many companies were showing off flexible displays at CES, notably Royole, which made pre-show headlines with a janky foldable Android phone. This purse was just one example of how the same flexible screen will appear in other form factors, conceivably eliminating the need for some users to carry phones in their pockets. 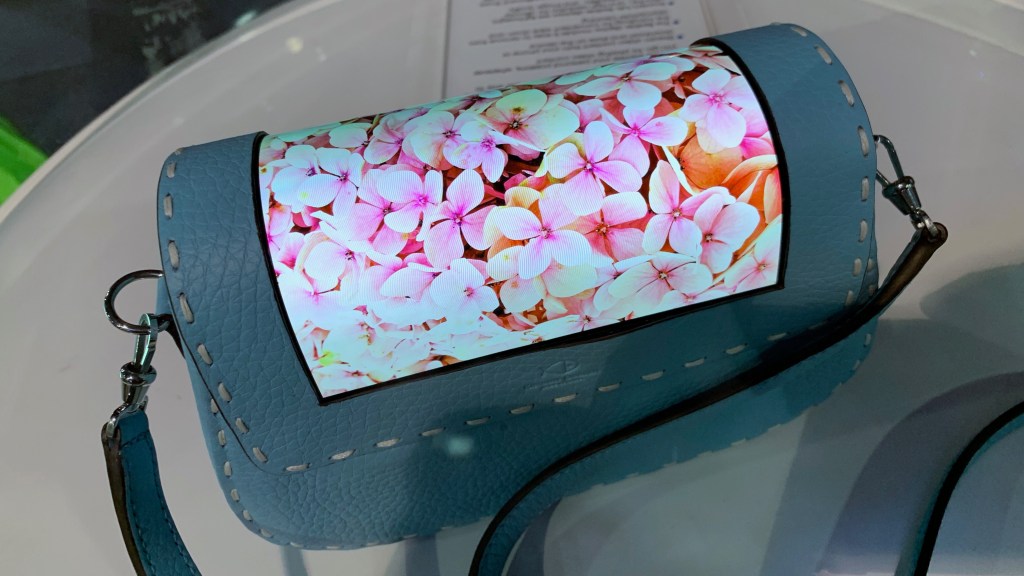 Do I think big-screened wearables like purses are going to be a trend? Perhaps not for a little while. But it looks like the technology exists to make it happen sooner rather than later, and you could fit a really nice battery inside a purse form factor.

I was downright shocked at how many companies were showing off smart garments at CES, as it seems like the enabling technologies and business models have matured enough for multiple players to take a real stab at bringing washable electronics to market. One of the more eye-catching exhibits was from Skiin, which showed off Smart Underwear as a product that should be out by mid-year. The idea may initially sound insane, but it makes sense. 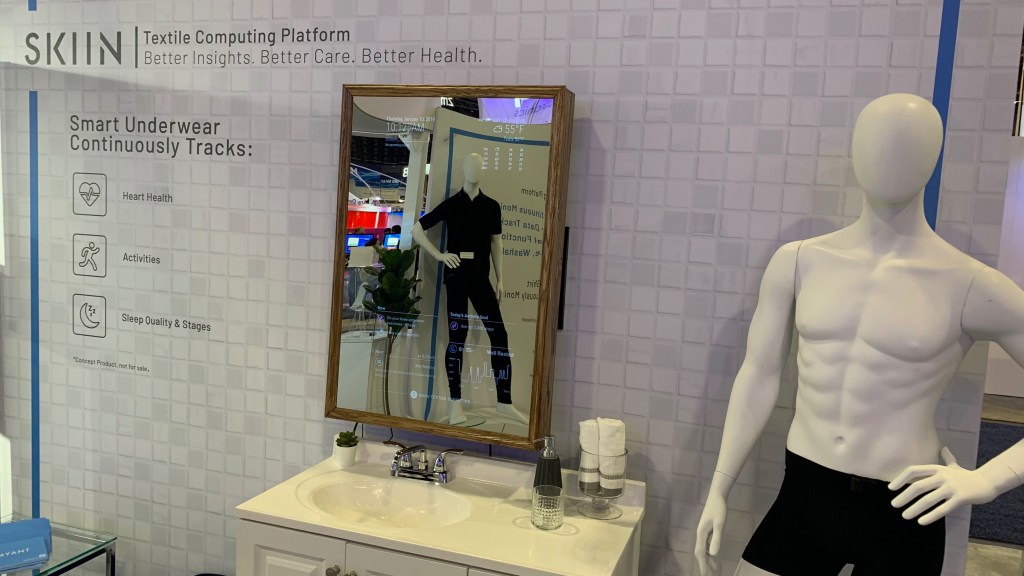 You’ll get eight pairs of underwear that should each survive at least 50 if not more washes. Each pair contains the electrodes necessary to monitor your heart, activities, and sleep characteristics for as long as you wear them. You just pull a small plastic transmitter box out of a pocket in the underwear and insert it in the next pair when you change.

Until smartwatches can deliver truly week-long battery life — and become comfortable enough for everyone to wear all night  — smart garments may make sense for activity and sleep tracking. Again, I’m not saying this is about to become a trend, but it’s not as crazy as it sounds. 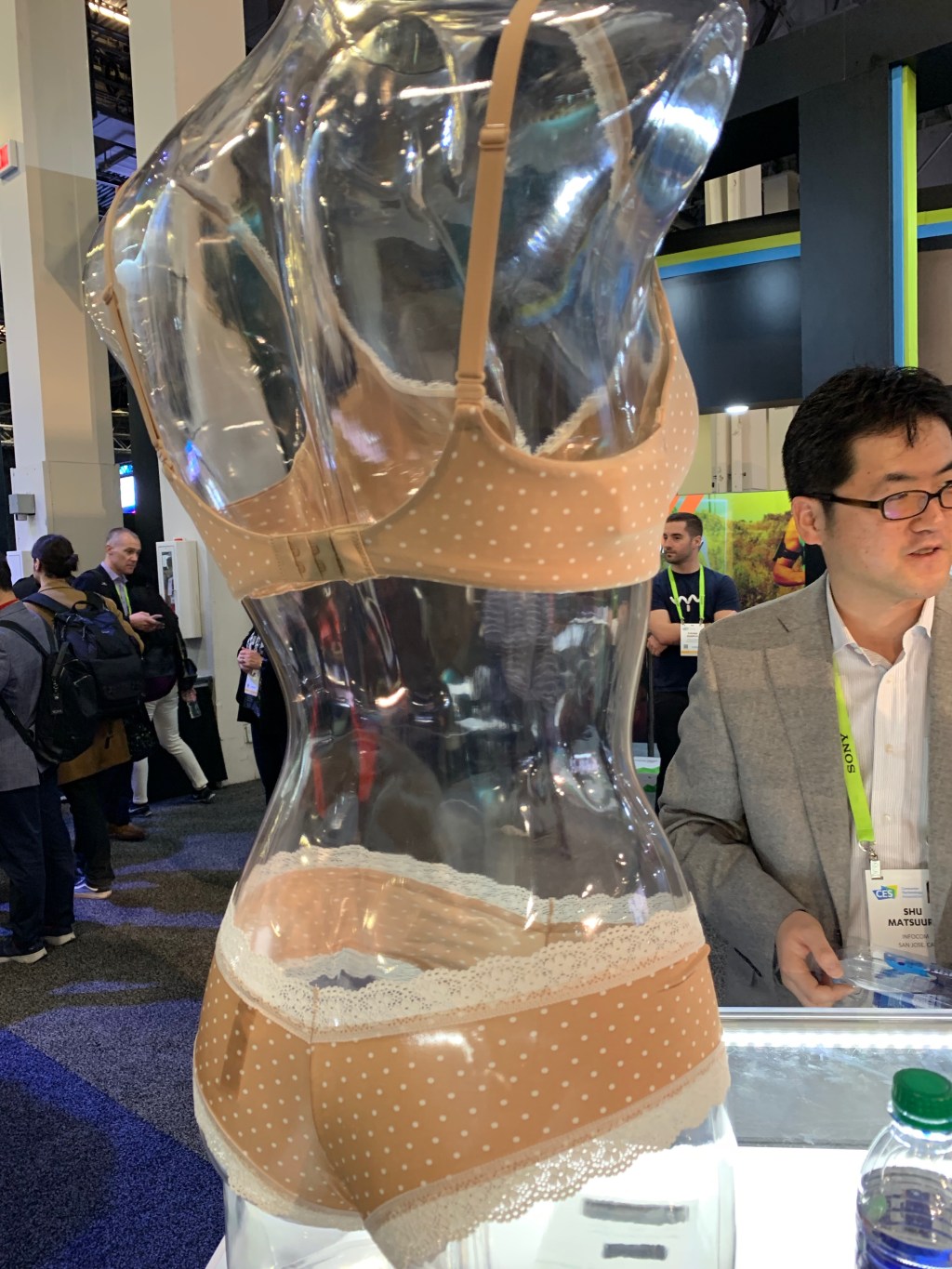 Other companies such as Spire Health were similarly showing off wearable health monitors. The Spire Health Tag goes into a bra or underwear band to track respiration, heart rate, sleep quality, stress, anxiety, and activity levels. It’s small enough to fit into the bra above — see if you can see it sticking out.

Wearables for your head

Too many companies to count have tried to find ways to build music players and/or headphones into glasses, with Oakley’s ill-fated Thump serving as one of the earliest forms of such wearables. There was no shortage of such options at CES this year, but one that stood out was OptiShokz, which were as light as a standard pair of plastic Oakleys but packed a Bluetooth 4 wireless chip, bone conduction stereo audio, twin microphones for phone calls, and Google Assistant support. Regardless of whether you like their style, the miniaturization of all that tech is pretty impressive. 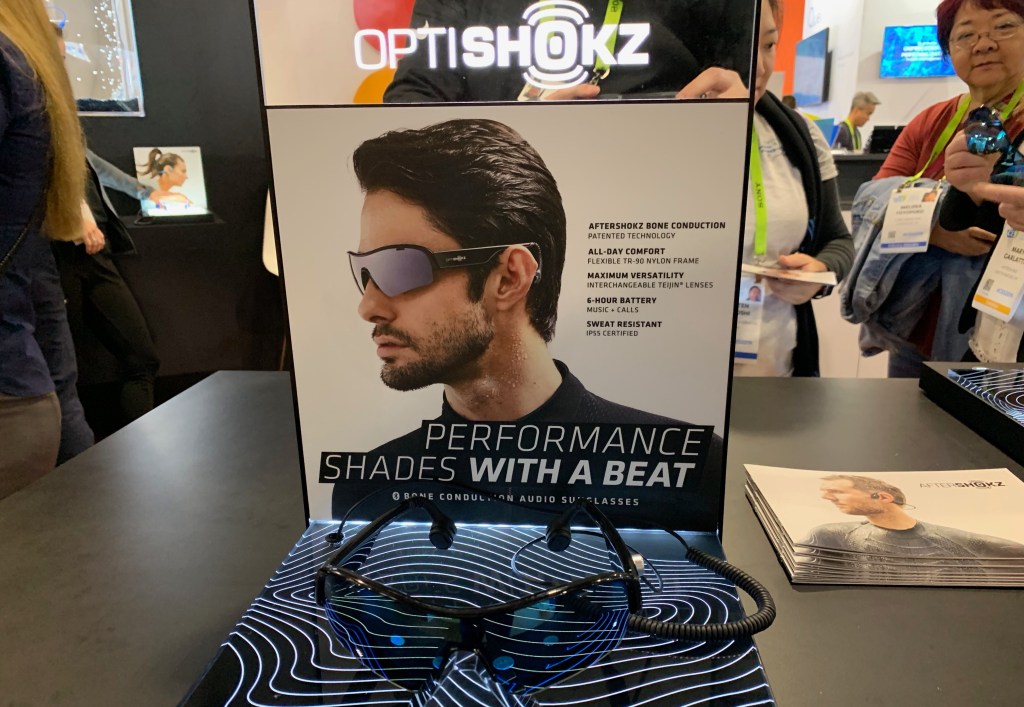 Muse was showing a “brain sensing headband” that looked like a prop from some late 20th century movie about the 21st century. It’s supposed to take “real-time biosignal feedback” to help you meditate and reduce your stress. I’ve always been really skeptical of such claims, but perhaps those old movies were right and we’ll all be wearing brain-monitoring headbands after all. 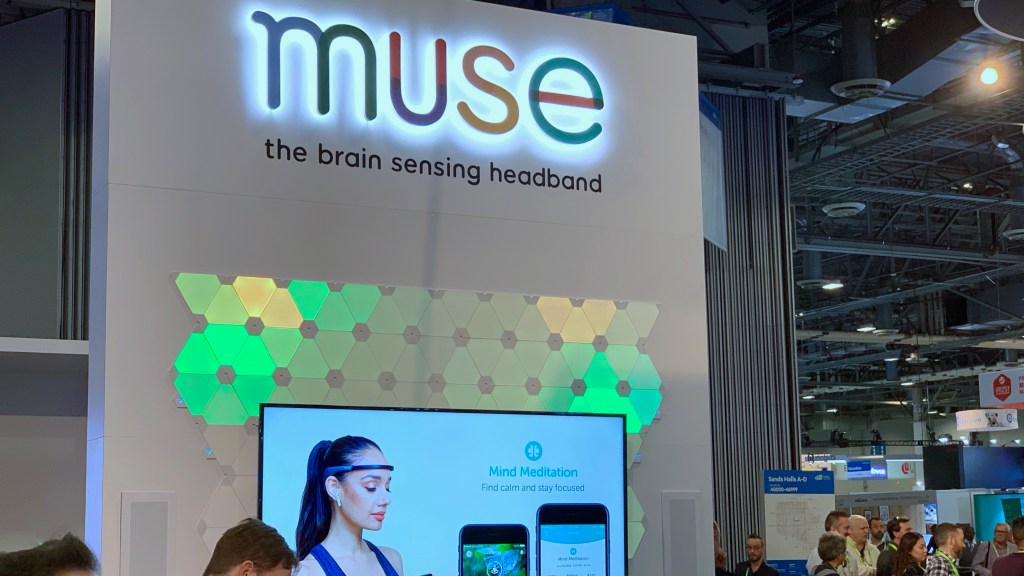 Cochlear was showing off “the first cochlear implant system with direct smartphone connectivity,” a hearing restoration device that can be paired with an iPhone. It can stream directly from an iPhone (or other iOS device) to your ear, making phone calls, music, and videos a lot easier to hear for those with serious hearing disabilities. 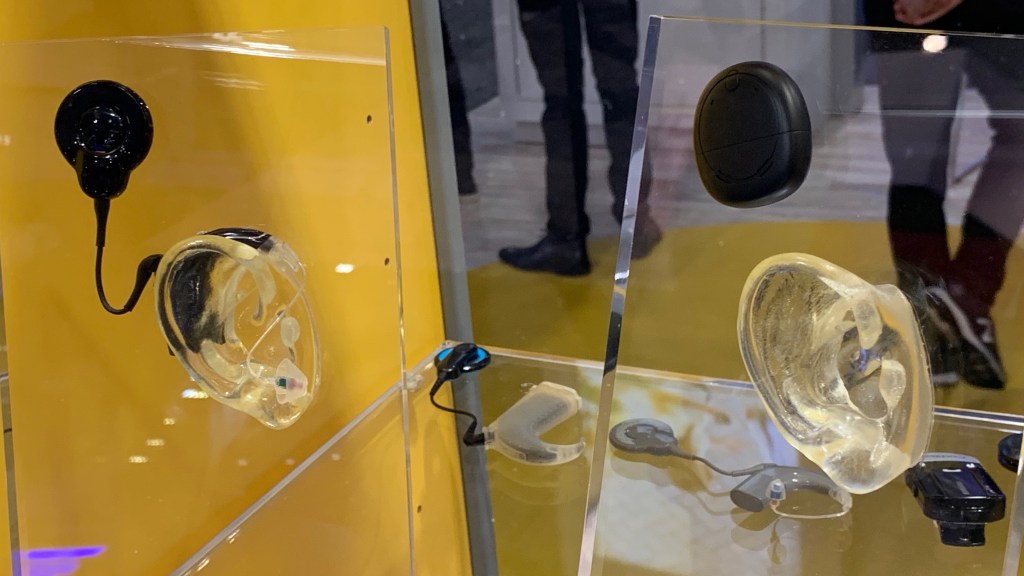 The Nucleus 7 Sound Processor was released a little over a year ago, but was just one of many examples of how wearables are moving all over the body.

Wearables inside your body

Though this category of wearables has actually been around for decades, it’s worth briefly spotlighting as the technologies are continuing to become more impressive every few years. Medtronic showed me Micra, the world’s smallest pacemaker — a device that cardiac patients can use to regulate their heartbeats. Shaped like a bullet, it can be implanted with a minimally invasive procedure, and unlike earlier alternatives, users will barely notice it’s there. Consider the fact that Micra’s housing needs to hold a multi-year battery, sensors, and microchip hardware, all FDA-certified to be reliable enough to keep someone alive. It’s absolutely astonishing. 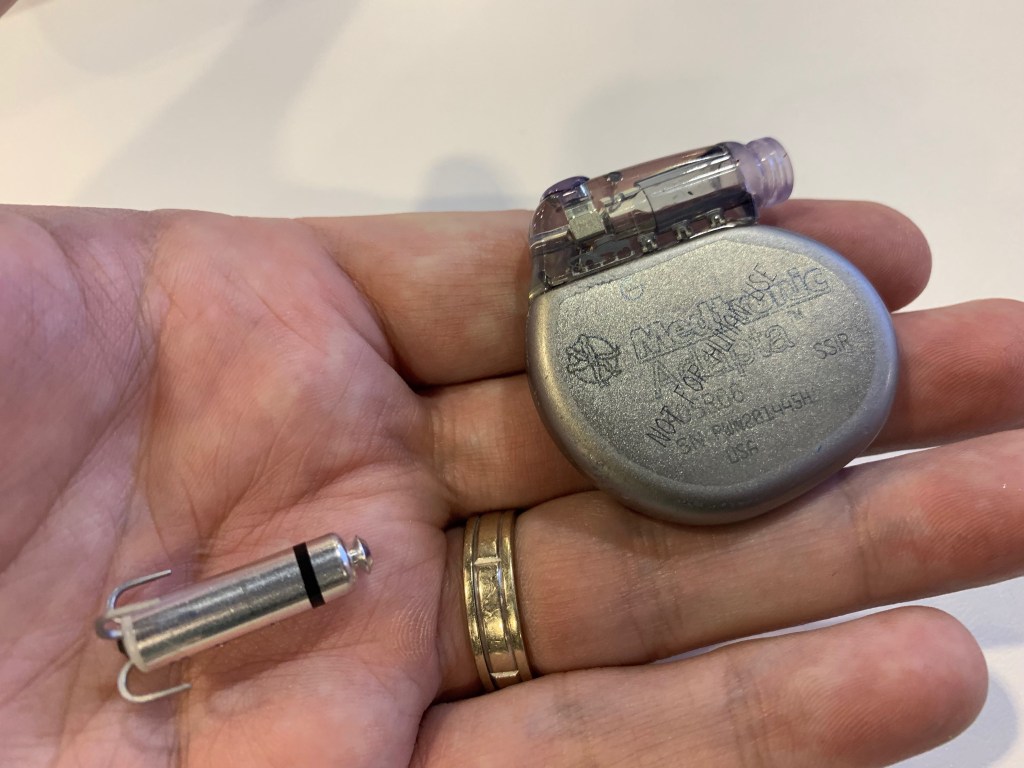 Medtronic was also showing off an implantable spinal pain management system that uses a rechargeable battery to reduce its size. 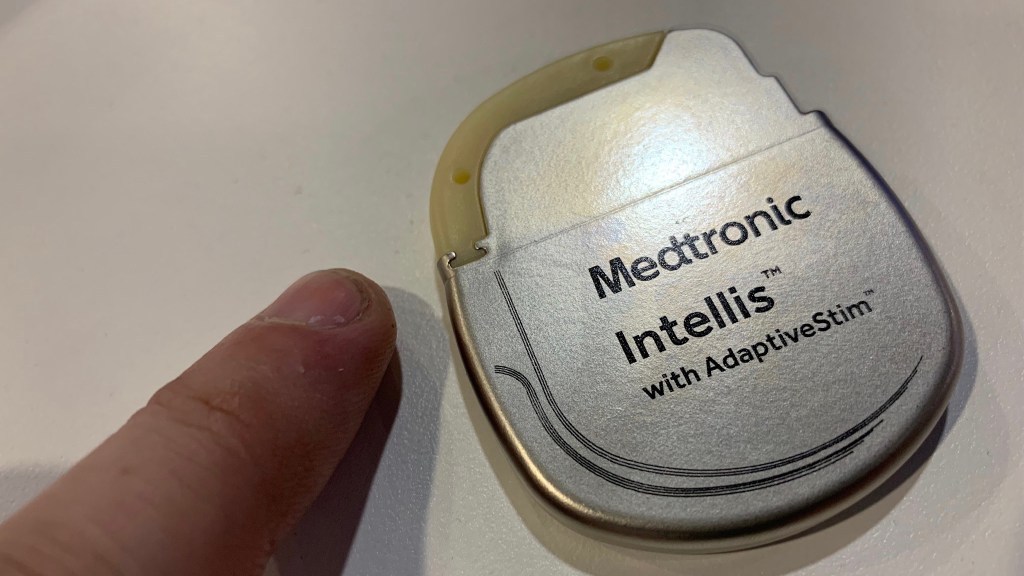 The implant has an inductive recharging coil that can be reached using a charging belt, and wireless hardware that lets users see the system’s performance with a series of cleanly designed, easy-to-read charts. 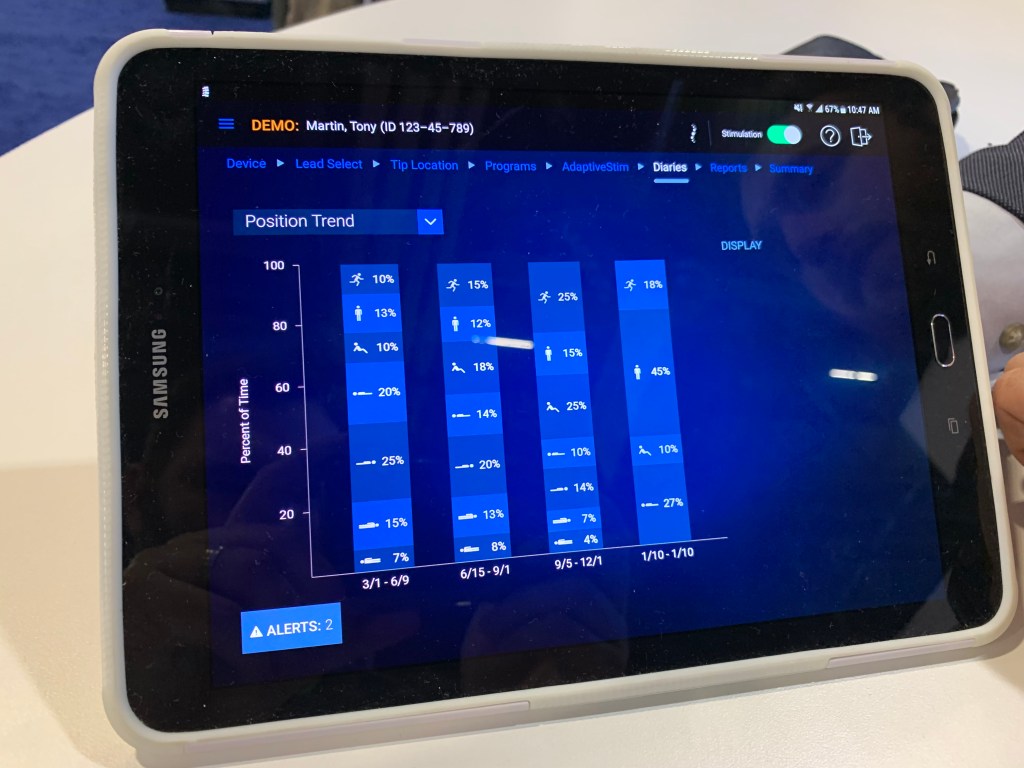 Ideally, people would never need to implant wearables under their skin. But as a person ages, it becomes much more likely that a life-saving or pain-managing implant will lead to a superior quality of daily life. It’s amazing to see how far these technologies are continuing to evolve, and with ever-shrinking chip technologies, they’re only going to get better over time.

Heart monitoring outside your body

I’ve already covered Withings’ new Move ECG watch and BPM Core blood pressure cuff in an earlier article, so I won’t repeat my prior words here. But I will point out that both of these products are going to be fairly big deals because of the functionality they bring to the table, and their designs. 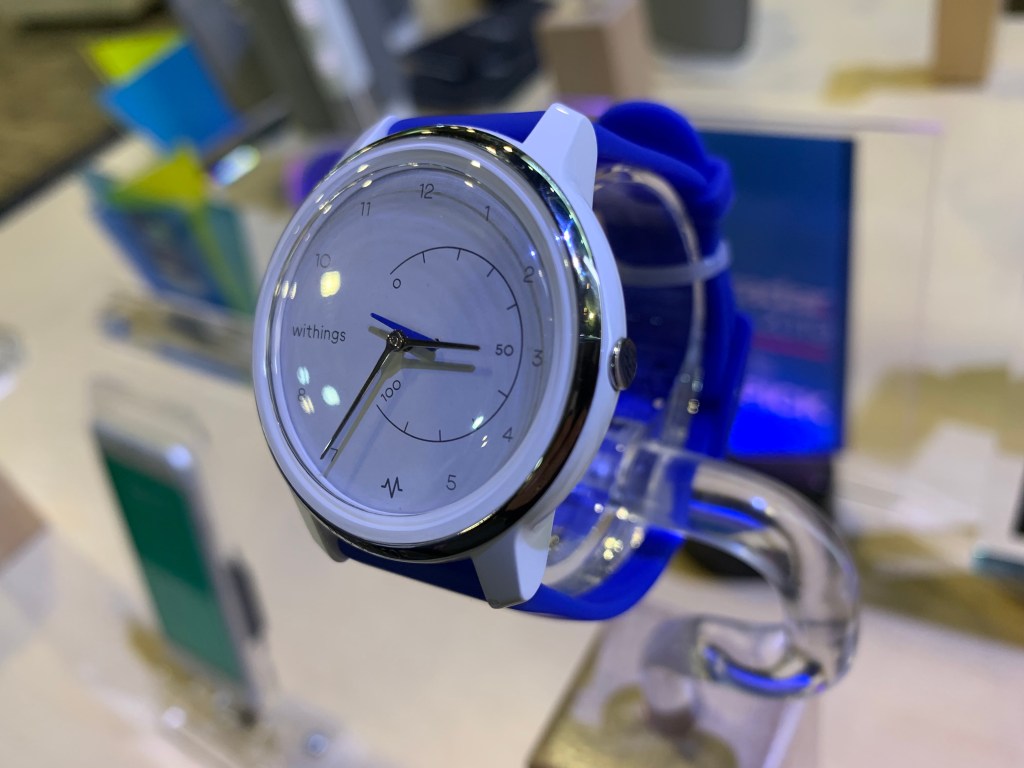 Move ECG brings wrist-based electrocardiogram measurement down to a mass-market price point of $130, compared with Apple’s $399 price for the Series 4 Apple Watch. The key is an ingenious system that doesn’t require a screen to take ECGs: Withings places two electrodes directly on your wrist, then has you touch the steel bezel with your other hand to close the ECG monitoring electronic “loop” with your heart. After 20 seconds, you get a vibration to confirm your scan’s done, after which you can review it on your phone whenever you’re ready. 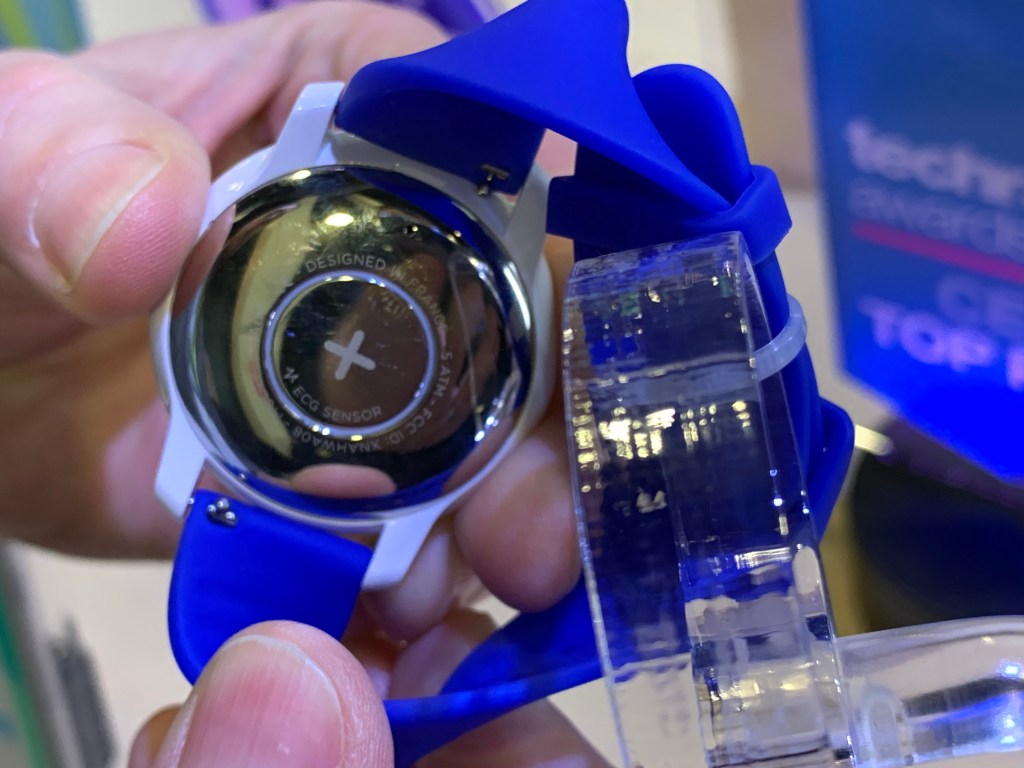 BPM Core is an expensive blood pressure cuff at $250, but if you look at the bottom of the picture below, you’ll see its subtle but brilliant design. That little metal surface is a digital stethoscope that enables you to take the third of three different types of heart readings using a single product: The inflatable cuff takes standard blood pressure, touching the metal electrode lets you do an ECG, and the stethoscope monitors your heartbeat. You needn’t remove the cuff for any of the readings — you can take them all in sequence with your shirt off at home. 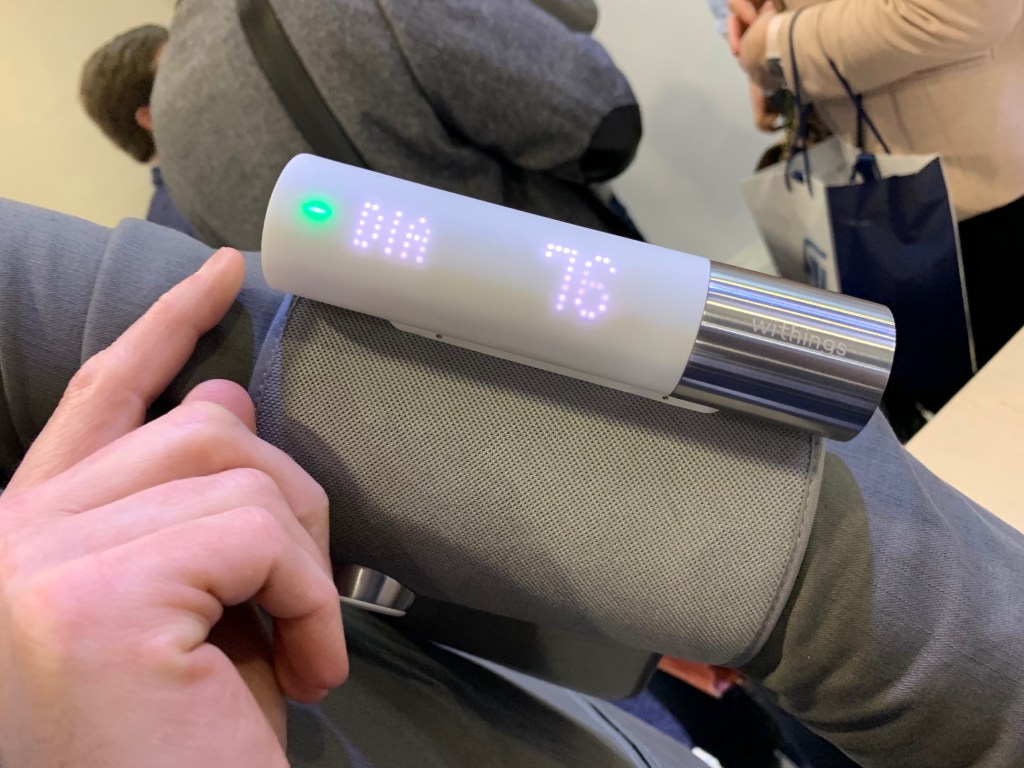 All of the results can be monitored and sent to your doctor from your iPhone. You can listen to your heartbeat on your phone, and see most of the other results on a cool integrated LED screen on the device itself.

My conclusion from CES: This is an exciting time for wearables. Not every one of them will appeal to every user, but there are so many with actual value that many niches will soon be filled by great options. We’ll have more to say on some of them in the future.