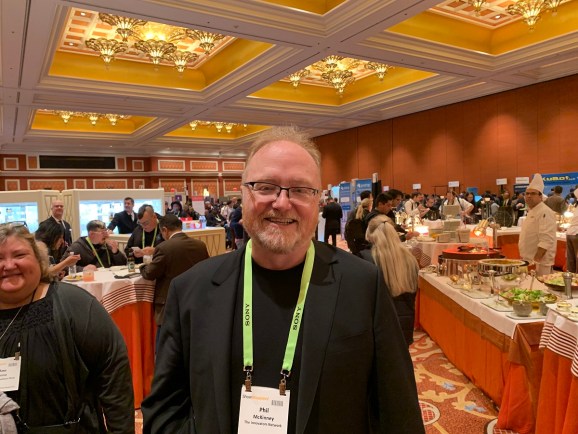 Phil McKinney of CableLabs at CES 2019.

At CES 2019, 5G was all over the place. The wireless technology promises to deliver cellular calls and data rates in the gigabits per second, making smartphone networks a real threat to wired data networks for the first time.

That’s why the cable TV industry — represented by the Internet and Television Association (NCTA), CableLabs, and Cable Europe — took the opportunity to announce plans to adopt 10G, or 10-gigabit-per-second data networks.

Competition is spurring the cable companies to ramp up from today’s 1-gigabit-per-second cable modems to 10 gigabits per second and beyond in the coming years. That’s going to be a two-way data rate, with fast speeds in both directions.

Above: A video wall of the future.

Cable operators in the U.S., whose networks currently service 90 percent of homes — including Comcast, Charter, Cox, MediaCom, and Midco, along with international operators like Rogers, Shaw, Vodafone, Taiwan Broadband Communications, Telecom Argentina, Liberty Global, and more — are implementing the new 10G initiative. And Intel is working to link the technology to home networks. Lab trials are already underway, and field trials are beginning in 2020.

Built using a capital-efficient approach and leveraging the expansive cable networks already deployed throughout much of North America, Europe, and Asia, the 10G network will seamlessly support a wide variety of immersive digital services and applications, said Phil McKinney, CEO of CableLabs, in an interview at CES.

Above: Mixed reality in the future.

VentureBeat: At first I interpreted 10G as you guys striking back against 5G, but I take it you don’t feel that way?

Phil McKinney: No, it’s not. We see it as complementary. In the case of the cable industry, more than half of our members are also mobile network operators. Manuel Cubero of Vodafone Germany serves on our board. Rogers, Shaw, JACOM in Japan. They’re all there on a global basis.

McKinney: It does. It’s the convergence. 5G, from a mobility perspective, in order to deliver the capacity, they have to go to the small cell strategy. To build enough small cells to get coverage, you need access to all that backhaul.

We did a project over a year ago as a joint test, and we released a specification that then defines how to do small cell backhaul over DOCSIS. Now a small cell provider can strand mount their small cells right on to the cable line and use that cable infrastructure for their backhaul. Today, pretty much 100 percent of the cable guys serve the mobile network operators with network capacity, fiber links, and so on. It’s a big business for them. You see the partnerships, like Comcast and Charter with Verizon. We don’t see it as competitive in any form. In fact, it’s kind of an apples and oranges comparison, because they serve different market needs.

A question we always get is on the fixed 5G. Do we think about that as a competitive issue? My view is that competition is good. It makes us all better. There will be a segment of the market that we refer to as “cord-nevers.” They’ve never been on a fixed network. Their entire life has been on mobile, and they’ll use mobile as their primary broadband access. That’s fine. There’s a lot of customers out there with different needs. Customers will choose who best serves that need.

VentureBeat: How did we get to so many homes in just a couple of years?

McKinney: To get to the 80 percent coverage, north of 100 million homes, it’s driven by the fact that — when you look at each subsequent generation of our technology, we always make sure it’s backward compatible. To deploy it, it’s not like you have to do a big bang and a single stream and everyone has to move. You can mix all of these technologies together.

We always do the work in partnership with the vendors. We were able to design it and they were able to build it in such a way that in many cases, it was just a software upgrade to the infrastructure they already had. It allowed for very rapid deployment, to get to four percent two years ago and now slightly north of 80 percent of all homes.

Above: CableLabs is trying to fend off 5G.

VentureBeat: 10G gets me excited, but then I look at the upload speed. I still have a little trouble getting excited about that.

McKinney: There’s a piece we don’t talk about. Or we do talk about it, but we didn’t make it a big part of the announcement. That’s what we call full duplex or symmetrical. We announced full duplex technologies about a year ago. You’ll start seeing those come out in next-generation silicon. Part of the Intel announcement that was made with Comcast is 10 gigabits, full duplex. You get 10 gig up and 10 gig down.

Today, though, even without symmetrical, you look at the performance — the download growth still outstrips upload growth. But when you start thinking about next-generation technologies like VR over distance or lightfield collaborations, all those things — we’ve already developed that. The chip work is being done by the silicon providers.

Again, the nice thing is, the cable operators can choose. Is the market demand there for it? How much capacity in the cable do they need to make available? The nice thing about full duplex is it takes advantage of the full bandwidth of the entire coax up, and then the full coax down. You don’t have any of the funky spectrum segmentation that we’ve dealt with historically. We’ve eliminated that constraint. It allows the cable operators to pick and choose the services they want to offer.

Above: Head-mounted displays of the future will help you understand the world around you.

VentureBeat: What are you doing at the Wednesday event?

McKinney: Basically getting into more detail. A lot of people have questions. What are the technology pieces that make this up? What technology holes are there? Are there any unknowns? Is 10G going to be real, or is it another far-reaching prediction that may not become a reality? We just decided we would be better off getting everybody together and letting the press hear from the CEOs. Pat Esser, the CEO of Cox, is there. Tom Rutledge, CEO of Charter. Tony Werner, the president of Comcast Technology. It isn’t just me talking about the stuff we do in the lab. These are the guys putting billions of dollars into their network to deliver this.

VentureBeat: Is that what it’s going to take, that kind of huge capital investment?