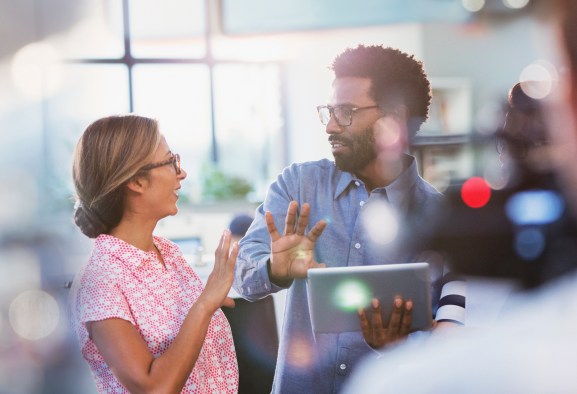 We all want to do work that matters, but not all of our work ends up resonating across the organizations we work for. There are times when we spend hours on a project or initiative, only to watch it land with a dud. Then there are times when the results of our efforts get snatched up like gold.

The best way to ensure the latter is to communicate more. When we shorten feedback loops, allowing others to preview and inform what we’re working on, we increase our odds of ending up with gold.

So the question becomes, why don’t we do that more often? Too often, we toil in the vacuum of our minds, hesitant to share drafts of our work. An age-old, four-word myth is to blame. It goes like this: Leaders know the answer. This myth tells us that competent people don’t need their work checked or reviewed by others, for they have enough vision and sense to hit the target unaided. In the wake of this myth, we become convinced we are better off being self-reliant than asking for help — since that’s what a competent person would do, and we’d all like to be one of those.

The reality is that when we keep our work to ourselves, believing we should know how to make this project or that initiative a success, we set ourselves up for duds. Everyone has a limited vantage point — nobody can see all the angles. So when we rely solely on what we know and think, we miss out on the helpful perspectives that bring us closer to what’s needed.

If we want to create more gold, we have to rewrite the age-old myth. So going forward, this should be the new guiding light: Leaders learn the answer. The difference here is just one word, but that one word provokes wildly different behaviors:

Leaders who believe they should know the answer will stay siloed and keep things to themselves when they encounter important questions or challenges. They will go insular at the exact moment they should seek guidance and alternative angles.

Leaders who believe they should learn the answer default to asking for feedback and help. These interactions help them see more perspectives and possibilities so they can make more informed decisions.

The first company I started was called Quipol, and it failed. When I designed and developed Quipol’s software, I did so in a vacuum. I made very little time to get input from the people who would ultimately end up using it. Instead, I spent nine months bouncing ideas off of myself and those who were helping me build the software. We labored over the smallest of workflows and the most incidental details — it was as though we knew exactly how Quipol should work.

Not once during all this did I think, hmm, are we piling guesses and assumptions on top of each other here? My dreams of pulling back the curtain on Quipol and watching the world applaud my efforts were too intoxicating. My 22-year-old self couldn’t see past his nose. So when the day of Quipol’s launch finally arrived, my reckoning came with it.

Instead of uniform applause, the people who looked closely at Quipol instantly poked holes in my work. Literally minutes after sending a “Quipol is here” email, a question hit my inbox. It read, “Congrats on Quipol, but why doesn’t it do X?” X was an idea that made a lot of sense, and it was something I’d never even considered. Here was some guy, three minutes into his analysis of my work, noticing something I’d overlooked for nine months. I thanked him and told him the truth: “That’s a great idea. I never thought of it.”

I knew one thing for sure: I was done with this whole leaders-know-the-answer nonsense. I had tried that path and found it very dissatisfying. So when I followed up on Quipol with Lessonly, right out of the gate, we had a new mantra: We share before we’re ready. Sharing before we’re ready is how we put leaders-learn-the answer into practice. The allure of staying in a vacuum is strong, but when we make an effort to share early and often, we increase our odds of spending time on the things that are really needed, instead of the things we think are needed.

Max Yoder is CEO and cofounder of Lessonly. His upcoming book, Do Better Work, will be published in February of 2019.