The funding for the Reykjavik, Iceland-based company was led by Draper Associates and Capital300. The company said it completed its funding round in two weeks.

Authenteq CEO Kari Thor Runarsson said the company is talking with additional investors about a second closing of the Series A financing, which is expected to happen in the next couple of weeks. 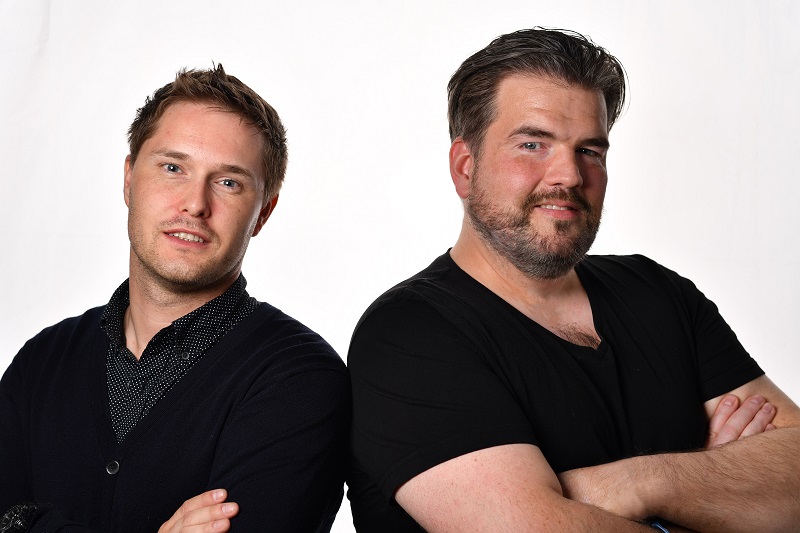 Above: Adam Martin (left) and Kari Thor Runarsson are the cofounders of Authenteq.

“The reason we decided to do two closings is we were introduced to an investor (Capital300) with a startup mindset of getting things done and felt it was a great challenge to try to finish all due diligence and paperwork in two weeks after the term sheet was approved,” Runarsson said, in a statement. “It was sort of a field test for us to see if they really were as agile and dynamic as they claimed to be during our discussions. We were honestly surprised how smoothly it went, despite a very thorough due diligence and legal process.”

Authenteq publicly launched its service in late 2018, and it signed up a dozen clients in the first months. A typical customer needs to comply with KYC (Know Your Customer) and AML (Anti-Money Laundering) regulations, meaning companies in the financial industry, as well as online marketplaces and professional services.

“Having forward-thinking investors such as Tim Draper continue his support of Authenteq after backing the company in the seed round and a convertible note shows his interest and dedication to the space,” said Runarsson. “And having investors like Capital300 who show the entrepreneurial spirit of getting stuff done in record time really gives us confidence that we have picked the right investors for our continued growth.”

Draper is known for his investments in Skype, Tesla, SpaceX, Baidu, Coinbase, Robinhood, and Twitch.

“I believe that Authenteq is the beginning of the solution to true and pure identity, which may eliminate many of the security concerns in the market today. Their product is simple and elegant,” Draper said, in a statement.

Authenteq’s AI-driven automatic identity verification process uses a proprietary passive liveness detection to make sure whoever is signing up for the service is doing so in real time. The company then issues an eID for the user, located on the user’s mobile phone and private blockchain. In less than 60 seconds, a user is verified with government-grade facial recognition algorithms, and the photo ID documents are authenticated.

The market for mobile identity verification is currently estimated at $10 billion and is expected to double in the next four to five years, according to consulting firm McKinsey.

Authenteq differentiates itself from other players in the space with its eID, which gives the user complete control and ownership over their online identity. Authenteq’s plan is to introduce various disruptive services for the largely untapped market.

The company has 22 employees working in its Berlin and Reykjavik offices, and the new funding will be used in part to fill a range of new positions.

Authenteq believes its identity management service can help curb the scourge of internet trolls. Trolling has become endemic across platforms ranging from Twitter and Facebook to online news sites, and these haters have made many previously family friendly and socially responsible websites into havens for online abuse. No matter how many troll accounts are deleted by the provider, they still return under a new name or handle and continue their vile behavior, threats, and harassment.

With Trollteq, once a user is banned, they are gone for good and cannot re-register under a false name or identity. It requires buy-in from platforms that allow some degree of anonymity or privacy, as Trollteq uses Authenteq’s identity management system, which requires people to verify that they are human.

You first have to use your smartphone to capture your image, selfie-style. Then you take a picture of your valid driver’s license or some other form of sovereign identification. Authenteq verifies that the images are of you and that the ID card is legitimate. Then it associates you with a login account that you are creating, without giving away your identity.

Above: You can sign in to verify your identity with Authenteq via smartphone.

Authenteq stores a hashstring on the blockchain that, if checked, simply verifies that you are a human who opened an account. It will not keep your picture or your identification information once the verification process has been completed. If it ever becomes necessary to re-verify your identity, Authenteq will look up the hashstring on the blockchain, which is a secure and transparent decentralized digital ledger. With passports, Authenteq can read an encrypted chip for verification.

By not storing the data, Authenteq ensures that it won’t force customers to give up their privacy. For instance, if law enforcement comes to the website and demands to know the identity of a person behind an account, neither the platform owner nor Authenteq will be able to turn that information over because they won’t have it.

Of course, even these safeguards won’t satisfy some people, particularly those who have no interest in turning over their digital information or picture to any online entity. Runarsson acknowledges it will be difficult for some companies to require users to provide such verification. However, governments and new laws could very well require websites to verify that their users aren’t children, or that they have been verified in some way.

Under this system, all personal user information is user-owned, user-controlled, and completely inaccessible to anyone else — including Authenteq. With an Authenteq ID, how you verify your identity or parts of your identity to any third party is up to you. Trollteq can provision a digital biometric passport on any website, and the ID is user-owned and controlled, with all personal information kept on the blockchain.

After the initial signup, it takes a user under three seconds to connect their ID to any additional online profile, account, or identity they have, all without using a password. Trollteq incorporates exceptionally robust fraud and privacy protection tools, including liveness detection — advanced technology that makes sure only real live human beings are signing up, as opposed to static photos. Importantly, since Trollteq does not save any data about the user, there is no threat of a database breach leaking personal information.