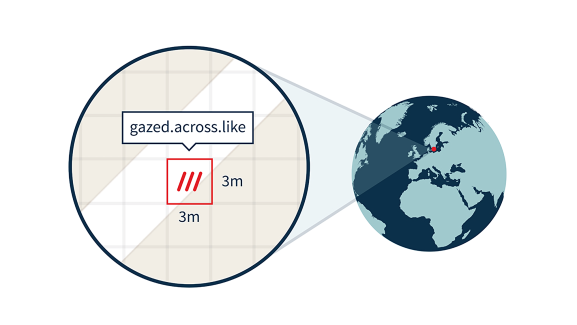 A universal system to index the world’s locations might sound ambitious, but that’s exactly what Chris Sheldrick and Cambridge mathematician Mohan Ganesalingam set out to build six years ago with What3words. Their mnemonic alternative to longitude and latitude coordinates consists of 57 trillion three-meter-by-three-meter squares spanning the entire globe, each associated with a unique address made of three words — like ///kicks.mirror.tops (the White House) and ///filled.count.soap (What3words’ London office).

What3words isn’t the first to attempt such a system — Google’s Open Location Code and Mapcode are among its forerunners. But with substantial backing and growing mindshare, the latter of which is being partly driven by inclusion in travel guides such as Black Tomato, Pocket Earth, Trip Wolf, and Lonely Planet, it’s well on its way to becoming a de facto standard.

Investors were quick to realize the potential. Daimler acquired a 10 percent stake in the London startup last year and built it into the navigation systems of its newest A-Class and B-Class cars and Sprinter commercial vehicles. Separately, it’s garnered support from the likes of Airbnb, TomTom, and ride-hailing services like Cabify and Jeeny, all three of which recently added support for What3words addresses. The latest to get onboard is Sony — today it announced that the Sony Innovation Fund, its venture capital arm, has invested an undisclosed amount in What3words.

“What3words have solved the considerable problem of entering a precise location into a machine by voice,” Toshimoto Mitomo, senior vice president of Sony, said in a statement.

What3words’ system — which is available in 26 languages — is optimized for voice input, says Sheldrick, who serves as the company’s CEO. It takes only a few lines of code to integrate and contains built-in error prevention that identifies and corrects input mistakes. And critically, its address-generation algorithm — which draws on 40,000 words in English and up to 25,000 words in other languages — works offline without the need for updates.

That’s particularly useful in countries like Saudi Arabia, where street addresses are often not used and navigating via landmarks and shared locations can be a challenge. Moreover, it allows for greater precision than is afforded by street addresses — for example, a delivery carrier could be instructed with a What3words address to meet at the southwest corner of an apartment high rise, rather than its front entrance.

What3words offers a free app on iOS, Android, and the web that allows people to find, navigate, and share three-word addresses. The company claims that, in addition to named partners, more than 1,000 postal services, delivery companies, tourist authorities, and automobility companies in over 170 countries are using its system through licenses, APIs, and software development kits. In addition, a number of nongovernmental organizations have tapped the addressing system through What3words’ humanitarian program.

One of their clients is Domino’s Pizza, which recently partnered with What3words for deliveries in the Middle East. When ordering over the phone, customers provide their three-word address to call center agents.

Another is Mongolia’s national postal delivery service, which adopted What3words in 2016 in lieu of a consistent addressing system.

That might rightly give some folks pause, given that What3words stands to materially benefit from what’s essentially public infrastructure data. But Sheldrick compares it to the Royal Mail, the nongovernment organization that owns the U.K.’s Postcode Address File.

“We offer a full range of commercial options for anyone who integrates What3words to have access to the system and security of supply,” he told VentureBeat in an earlier interview. “There are many public-private partnerships around the world, and these include address and similar systems.”

What3words now counts 103 people in its employ across offices in London, Mongolia, South Africa, the U.S., and Saudi Arabia. To date, the startup has raised a total of $56 million across nine funding rounds.