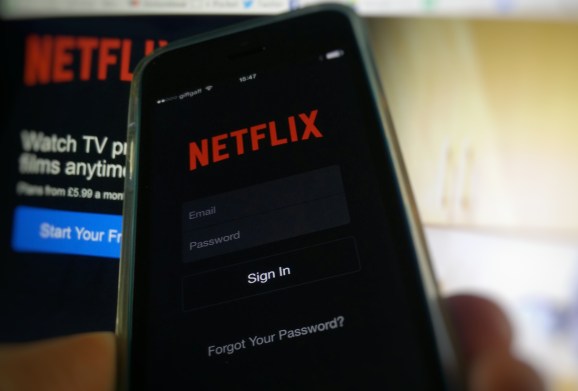 Investors may have been hoping for more after Netflix announced a price hike for U.S. subscribers earlier this week, usually a sign that demand is strong.

“Results won’t push its stock higher from here, with most of the good news already priced in after a massive rally earlier this month,” said Investing.com senior analyst Haris Anwar.

Investors, however, appear to have factored that, and the price hike, into their valuation, pushing Netflix shares up more than 50 percent since late December.

The company has staked its future on global expansion and creating original TV shows and movies to hook new customers and keep them paying monthly subscription fees.

But it faces increasing competition from established TV and movie producers such as Walt Disney, which has stopped supplying new movies to Netflix in order to stock its own streaming service planned for later this year.

AT&T and Comcast also have digital offerings in the works.

“The worry is that international bruisers like Disney and Amazon aren’t going to go down without a fight, and both have the financial clout to counterpunch pretty hard,” said George Salmon, an analyst at Hargreaves Lansdown. “The battle for viewers’ eyeballs is only just getting started.”

Netflix Chief Executive Reed Hastings played down such competition in a livestreamed interview after the company’s earnings report, as his company now competes with many rivals.

“Any one provider entering only makes a difference on the margin,” he said.

Netflix said it lost more of its customers’ viewing time to the video game Fortnite than HBO, the premium cable network owned by AT&T.

“Bird Box” became a cultural sensation after its Dec. 21 release on Netflix. The company estimated that 80 million households will have watched the movie starring Sandra Bullock in its first four weeks, sparking a viral reaction online.

The buzz came during the Christmas holiday season, when sales of phones and internet-connected TVs typically lift Netflix subscriptions.

Netflix said its programming now accounts for about 10 percent of television screen time in the United States, a sign of its popularity but also the room for growth. Total paid streaming subscribers reached 139 million worldwide.

It added an unprecedented 781 hours of U.S. original programming in the United States during the quarter, according to Cowen & Co analysts, including drama series “Narcos: Mexico” and holiday films such as “The Christmas Chronicles.”

For the fourth quarter, Netflix reported revenue of $4.19 billion for the quarter that ended in December, slightly below the $4.21 billion that Wall Street analysts had forecast, according to IBES data from Refinitiv.

Wall Street has come to expect fast-growing Netflix to handily beat forecasts. Without a blowout quarter or ambitious forecast, shares fell 4 percent in after-hours trading to $339.40.

Netflix reported earnings of 30 cents per share for the quarter, lower than a year earlier due to higher spending, but above Wall Street analysts’ average estimate of 24 cents, according to Refinitiv.

(Reporting by Lisa Richwine in Los Angeles and Vibhuti Sharma in Bengaluru; Editing by Sriraj Kalluvila and Bill Rigby)