Starship Technologies, the Estonia-based robotics startup created in 2014 by Skype cofounders Ahti Heinla and Janus Friis, is already ferrying food from kitchens to customers through partnerships with Domino’s in Germany, London food-delivery firm Just Eat, and DoorDash in the U.S. But starting today, that group is expanding to include the 40,000 students, faculty, and staff at George Mason University’s Fairfax campus.

This week, courtesy a collaboration between Starship and food and facilities management provider Sodexo, a fleet of 25 robotic couriers will begin delivering items from Blaze Pizza, Starbucks, and Dunkin’ for a flat rate of $1.99. The new service — which Starship claims is the largest of its kind — works in conjunction with student meal plans, and will take just 15 minutes or less on average.

“We’re excited that our students, faculty and staff get to be at the forefront of this pioneering campus food delivery service,” Mark Kraner, executive director for campus retail operations at George Mason University, said. “This will enhance life for everyone at the university, and that’s something we’re continuously looking to build upon. Our commitment to providing an optimal campus experience is one of the things that distinguishes George Mason University as a place where everyone can thrive.”

As with Starship’s previous delivery pilots like that involving food service company Compass on Intuit’s Mountain View premises, its mobile app for iOS and Android facilitates the ordering process. Users choose which food or beverages they’d like, drop a pin where they want their delivery to be sent, and unlock the robot’s storage compartment once they receive an alert indicating it’s arrived.

Starship’s six-wheeled robots pack a wealth of electronics, including nine cameras and ultrasonic sensors, that affords them a 360-degree view of their surroundings. They can carry up to 20 pounds at a maximum speed of 10 miles per hour — the equivalent of three shopping bags, Starship says. They’re capable of recharging, crossing streets, climbing curbs, traveling at night, and operating in rain and snow autonomously, but a team of human teleoperators monitor their progress remotely as a precaution. In the event something goes wrong, they can take control at a moment’s notice.

“University dining programs are evolving their strategies to meet this generation’s elevated expectations, such as better quality, variety, and service delivery,” said Jim Jenkins, CEO of Sodexo’s Universities East division. “George Mason University’s culture of innovation and early adoption makes it the perfect campus for Sodexo and Starship to introduce this cutting-edge technology and enhance the campus experience for the entire school community.”

The George Mason deployment comes months after Starship unveiled a $10-per-month commercial package delivery service for businesses and consumer clients, and a year after it launched a large-scale commercial meal delivery service aimed at corporate and academic campuses in Europe and the U.S. And it follows hot on the heels of the debut of Serve, a robot designed in-house by Postmates’ X lab. Serve, like Starship’s robots, can autonomously navigate sidewalks and city streets; it can carry up to 50 pounds for 25 miles.

Postmates and Starship are far from the only firms attempting to nab a slice of the lucrative autonomous delivery market, which is filled with well-funded startups like Marble, Starship Technologies, Boxbot, Dispatch, and Robby, to name a few. Indeed, the McKinsey Institute forecasts that driverless rovers like Serve will make up 85 percent of last-mile deliveries by 2025. 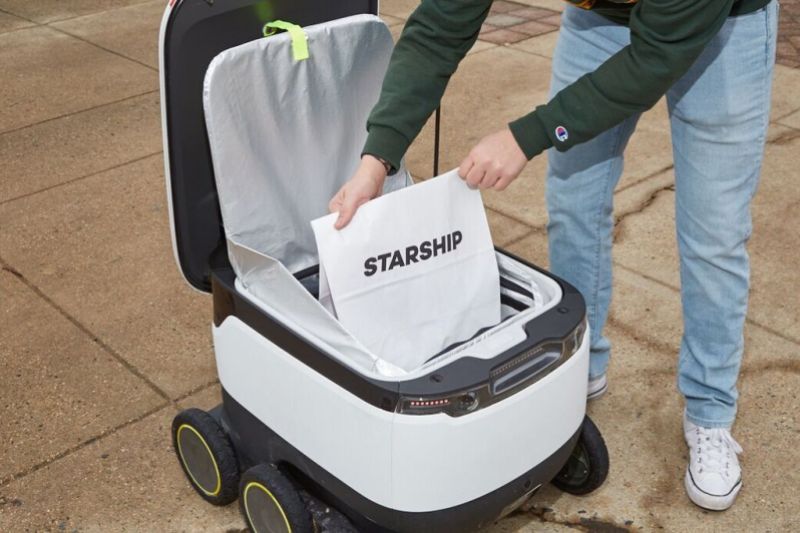 That’s not to mention companies like Nuro, which teamed up with grocery giant Kroger for self-driving grocery deliveries in the U.S. this summer; Robomart, which recently announced plans to test its driverless grocery store on wheels; Udelv, which partnered with grocery stores in Oklahoma City to transport perishables to customers’ doorsteps; and Ford, which is collaborating with Postmates to deliver items from Walmart stores in Miami-Dade County.

But Starship has plenty of deliveries under its belt. It’s embarked on dozens of trials in over 100 cities globally, and its robot fleets have completed over 25,000 deliveries and traveled more than 150,000 miles collectively.

Ryan Tuohy, senior vice president of business development at Starship Technologies, is betting that forward momentum will position it for success in the future, as it pursues new joint ventures.

“College students and digital natives really understand technology and expect it to be integrated seamlessly into their daily lives,” he said of today’s news. “Our goal is to make life a little bit easier for students, whether that means skipping the line, eating lunch on the lawn rather than in the cafe, or finding the time to eat better when studying for exams.”

Starship recently raised $25 million following a $17 million round in 2015, bringing its total raised to $42 million. The company has 200 employees with offices in San Francisco, Hamburg, London, Washington D.C., and Tallinn, Estonia.