While many companies already have security mechanisms in place to access company information remotely, these may involve virtual private networks (VPNs) or mobile device management (MDM) software — solutions that are often costly and complex to use and to configure.

What Amazon WorkLink promises is a user experience akin to what people have come to expect from browsing the internet — one-click access to the information they’re looking for.

AWS now represents around 10 percent of Amazon’s revenue, and it is far and away the leader in the public cloud market, but to maintain this lead against rivals such as Microsoft’s Azure and Google Cloud, it needs differentiating features that appeal to businesses. It’s often said that companies’ biggest security risk is their employees’ negligence and complacency, be that through a misplaced mobile phone or poor security hygiene. And this is what WorkLink promises in a nutshell: to make it easy for workers to access company content without putting that content at risk.

Amazon WorkLink is enabled via an app installed on the employee’s phone, and they can then access internal company content through their standard browser, without having to rely on a custom proprietary browser, as some MDM software requires.

Behind the scenes, WorkLink renders all company content in a browser running on AWS, and this content is then sent to employees’ devices as vector graphics; however, these aren’t static snapshots — the full functionality of the original page is kept intact.

The upshot of this is that remote workers’ devices never actually connect to the company network directly, and sensitive company content is never stored (or cached) on phones. 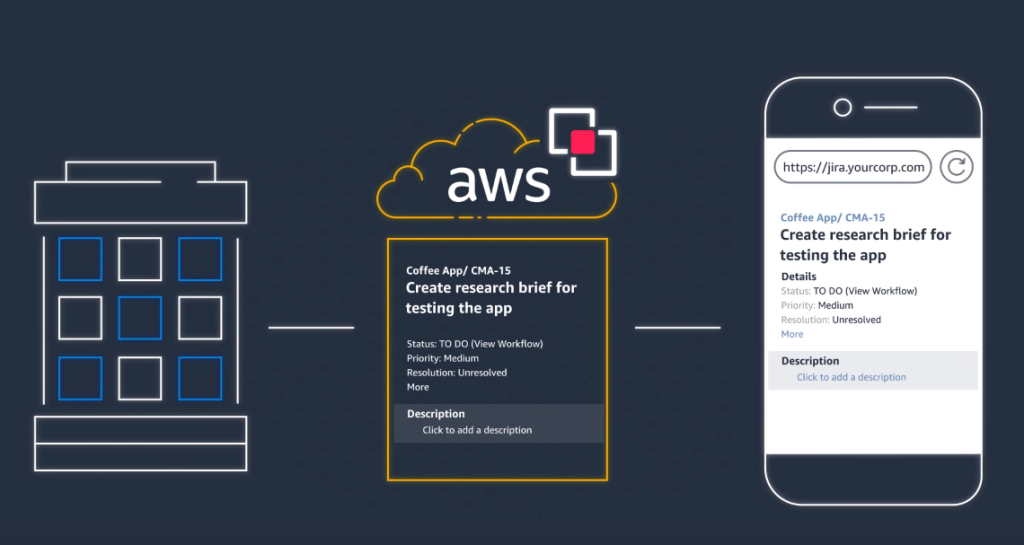 Above: WorkLink: How it works

“When talking with customers, all of them expressed frustration that their workers don’t have an easy and secure way to access internal content, which means that their employees either waste time or don’t bother trying to access content that would make them more productive,” noted AWS VP of productivity applications Peter Hill, in a press release. “With Amazon WorkLink, we’re enabling greater workplace productivity for those outside the corporate firewall in a way that IT administrators and security teams are happy with and employees are willing to use.”

At launch, WorkLink will only work with iOS devices running iOS 12 and above, and it will only work with Safari. However, Android support is coming in the next few weeks, at which point support for Chrome will be added to the mix. In terms of costs, AWS said it’s charging a set $5 monthly fee for every active user.

WorkLink will initially only be available in North America and Europe, though it will be rolled out more widely later in the year.