Nothing annoys an IT team more than answering the same doggone questions about Wi-Fi passwords over and over again. And the truth is that, excepting hardware installations and particularly tricky software configurations, many (if not most) small and mid-sized business’ day-to-day IT tasks now can be automated or handled offsite.

That’s music to the ears of companies that have historically paid a premium to keep IT technicians on premises, and at least a few of these businesses have recruited Electric to help them make the transition. The New York startup, which emerged from stealth in December 2016, offers a chatbot-forward interface that integrates with Slack — a simple, no-frills solution that’s helped it attract 301 customers with more than 10,000 employees (up from 90 customers in 2017). Now, as Electric gears up for its next stage of growth, it’s announcing a new funding round that brings its total capital raised to $38 million.

GGV Capital led Electric’s $25 million series B, with participation from existing investor Bessemer Venture Partners. It comes almost a year after Electric’s $9.3 million series A last March and will be used to “further invest” in the platform’s features and its client, sales and marketing, and executive teams. The goal this year is to triple the number of customers, users, and sales to increase revenue 3 to 4 times from 2018 and to expand to 25 U.S. markets. (Electric currently services New York, San Francisco, Boston, Philadelphia, Chicago, Austin, Washington D.C., and others.)

Electric also revealed that Jeff Richards, managing partner at GGV Capital, will join Electric’s board of directors and that former Blue Apron executive Rani Yadav and Compass head David Weiner have been hired on as chief operating officer and vice president of sales, respectively. 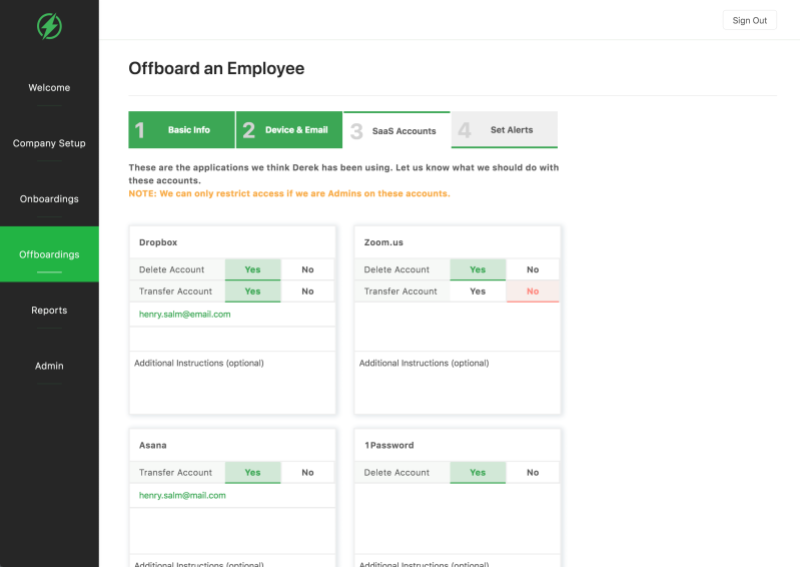 Above: A screenshot of Electric’s web backend, which managers can use to set up integrations with third-party services.

“This past year has brought exponential growth for Electric, and I’m proud to call us the fastest-growing company in our competitive set,” said Electric founder and CEO Ryan Denehy. “Our sales, product and engineering, and account management teams have scaled up to support a wide range of customers, and most importantly, make those customers happy. With the new funding, we’re excited to continue on this rapid growth trajectory and become the de facto IT solution for small and mid-size offices all over the country.”

Denehy — whose previous startup, Swarm, was acquired by Groupon in 2014 — describes Electric’s core service as “AI-driven,” with a heavy reliance on automation. Tasks like setting up an email address, connecting to an enterprise platform, and turning on a firewall are handled largely without human intervention; Electric claims it can resolve 99 percent of IT issues within an hour. In place of support tickets, users ping the Electric bot with “@Electric” on any Slack channel, which identifies the client and software being used, delivers a troubleshooting guide or suggested fix, and registers follow-up requests in a web dashboard.

“In short, we built a data warehouse fed by a human support desk,” Denehy explained via email, “and over the last two years used the data to inform our decisions about what to automate, when to automate it, and to create self-learning systems that rapidly increase the intelligence of our task automations over time.”

In the event a more complicated problem arises, Electric connects users with a technician who can undertake systems administration, security and network management, and troubleshooting remotely, or with a local vendor who can perform on-site assistance. Additionally, it affords them and administrators the ability to quickly perform tasks like creating users, updating permissions, deleting files, resetting passwords for apps, adding members to groups, and updating company-issued devices with security and vulnerability patches.

Companies pay a flat rate of $60 per month per employee for Electric — a fraction of the cost of employing an IT staff, Richards said.

“Small and mid-sized businesses will spend over $600 billion on technology in 2019 — more than $180 billion in the U.S. alone,” he said. “Now more than ever, those companies are struggling to deploy and manage their IT infrastructure. Ryan and the Electric team have built an incredible platform that leverages modern cloud technologies like AI and chat to support customers in a scalable way we haven’t seen before.”

Electric employs a team of around 100, and is headquartered in New York.