Intel today unveiled the RealSense T265 tracking camera, which can use visual cues or landmarks to help machines like robots and drones navigate an environment. The camera can also be used to power augmented reality solutions.

“You can use things like patterns on the wall or on the floor or on the ceiling to infer your location, which would not be observable with a depth camera or lidar,” a company spokesperson told VentureBeat in an interview.

This helps robots avoid getting lost, an issue sometimes referred to as the kidnapped robot problem.

The camera will go on sale February 28 and cost $199, with availability announced at a later date.

Intel’s RealSense line of tracking cameras currently features six models, which primarily use depth maps to help devices like drones and robots understand their location in a specific environment. 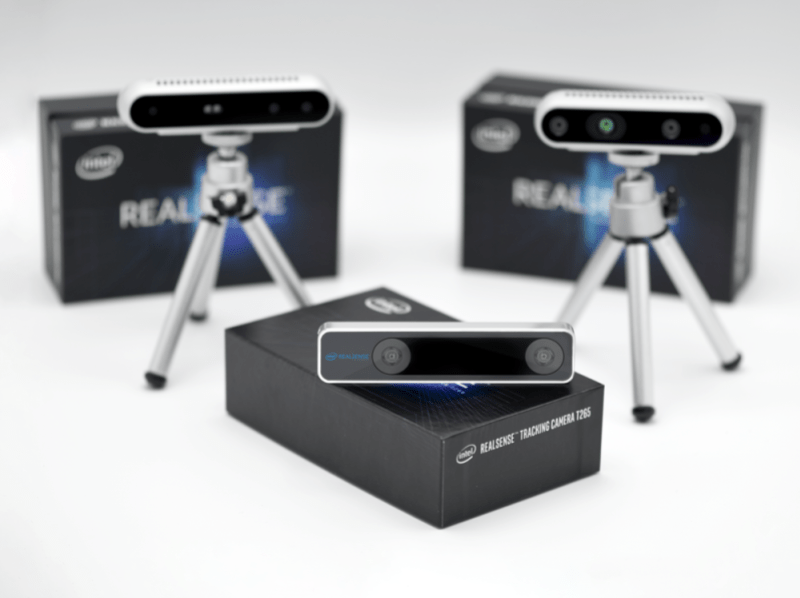 By comparison, the T265 uses ambient light and simultaneous localization and mapping (SLAM) to both avoid objects and understand its precise location. The Intel Movidius Myriad 2 vision processing unit (VPU) is used for data processing on the edge.

To see as many landmarks as possible, the T265 has two fish-eye lenses with a more than 160-degree view.

Unlike previous RealSense cameras, the T265 is a plug-and-play device that comes with its own processor, so it can operate without the need for an exterior compute source. The tracking camera only needs 1.5 watts of power and a USB 2.0 or 3.0 connection to operate.

The low-power, standalone solution means that the camera’s SLAM system can help machinery get around warehouses or under bridges or navigate other places without GPS, for example.

Initial flights with drones in areas where GPS coverage is unavailable — like below bridges — found SLAM to be about as accurate as GPS within 100 meters cubed, a company spokesperson said.