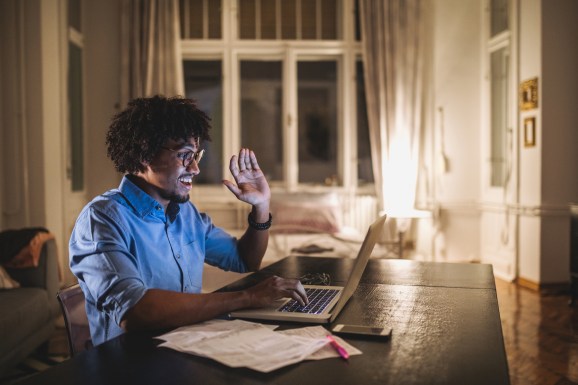 You know that nightmare where you’re naked giving a presentation at work? I recently heard about something similar — only it wasn’t a dream.

Some colleagues of mine were on a live video conference when one person on the call — not realizing their camera was on — picked up their laptop and took it, and the whole team, into … the bathroom … where he proceeded to do what one does in there. Yup, that happened. And not knowing what to say, nobody said a thing.

This is just one example, albeit extreme, of an issue that’s becoming more important in a modern business climate. Obviously, you shouldn’t relieve yourself while chatting with your colleagues, but just what is the etiquette on those video calls? And how do you avoid, well, crappy scenarios unfolding in front of your entire team?

Like it or not, video — be it the old-fashioned Skype call, Google Hangouts, FaceTime or new up-and-comer Zoom — is becoming a mainstay of business communication for good reason. In a world where 70 percent of people now work remotely at least some of the time, video is a crucial tool for maintaining company culture. It allows for collaboration among a distributed workforce, and opens doors for hiring talent from a global pool (a no-brainer in an era of record low unemployment).

But more than that, video brings humanity into the picture. Whether chatting with your boss or a prospective client, it allows for more connection, empathy, and responsiveness than any email chain or disembodied voice could ever provide.

But if you don’t happen to be a Gen Z’er who grew up making Instagram Stories and snapping selfies, you probably feel a bit awkward on camera — if not paranoid about how you’re appearing on-screen. As the CEO of a company that makes video tools, I’ve seen the right (and wrong) ways people adapt to video as a go-to communication tool. Here are a few tips and hacks — some obvious, some not so much — that I’ve picked up from the frontlines at Vidyard.

When in doubt, mirror your audience

My company doesn’t have an official video policy (and I don’t know many that do). I think that’s because video should be a natural extension of existing office culture. If you’re wondering whether a suit and tie is necessary for a Zoom meeting with your boss or that client you’re trying to land, an easy litmus test is whether you’d wear one if you were in the office.

If it’s common to see people in hoodies and flip flops at your workplace (or your client’s), then you’re probably fine to wear them on camera. If you work in a more buttoned-down environment, then reflect that for video meetings.

That said, when working from home, PJs generally won’t cut it (though I know plenty of people who sport the video mullet: business on top; sweatpants on the bottom). The same goes for calls where your backdrop is a pile of dirty laundry, a sink full of dishes, or empty pizza boxes. Even casual has its limits.

This might seem obvious, but when appearing on video, lighting, camera angle and audio all matter — in equal measure. The basics of making you look and sound your best are pretty simple: Light should be shining on your face, not behind you; use headphones to eliminate echoes and background noise; and put yourself on mute when you’re not talking. (No one wants to hear you eating Pringles during a conference call.)

As for camera angle, first and foremost, make sure you’re in the frame. You’d be surprised how often I end up talking to someone’s shoulder or ear, or responding to a disembodied voice drifting in from off-screen — a common hazard when people are sharing the camera with more than one person. Beyond that, camera angles from above are infinitely more flattering than a bottom-up shot, unless you’re going for that imposing demi-god look. Another pro tip for the image-conscious: Zoom has a great “airbrush” feature that gives you a “just-had-my-TV-makeup-done” look.

Don’t hide your face … or your personality

But I don’t want to lay down too many rules. Above all else, what makes video so powerful is its capacity to connect people — so don’t be afraid to be yourself.

There’s a misconception out there that showing personal effects or taking calls anywhere other than in a sterile white cube is “distracting” on video. But way weirder than seeing funky furniture or a picture of your kids in the background is the complete lack of any clues as to where, or more importantly, who, you are.

I video chat often with a colleague who has his college degree hanging behind him, along with some artwork his kids made. Right there, I have something about the guy to go on — and a jumping off point for some small talk. I personally don’t even mind taking video calls from people on the train or in a car — as long as the audio and visuals are clear, wherever you’re going is just part of your story.

On the flip side, the real distraction is getting “video ghosted” — you know, when you’re on camera but the person on the other end, for whatever reason, has turned theirs off. There’s something disconcerting, and really annoying, about talking to a black square. Everyone has bad-hair days, but if you’d rather be off camera at least check in and say hi first.

And one more tip on the distraction front: if you just don’t like seeing yourself on-screen, don’t be afraid to hide your “self-view.” Most video chat tools these days allow you to conceal that annoying little stream of yourself that shows up in the bottom corner of the screen. Just remember that you turned it off before you go sneaking off to the loo with your laptop.

Michael Litt is cofounder and CEO of the video platform for business Vidyard.