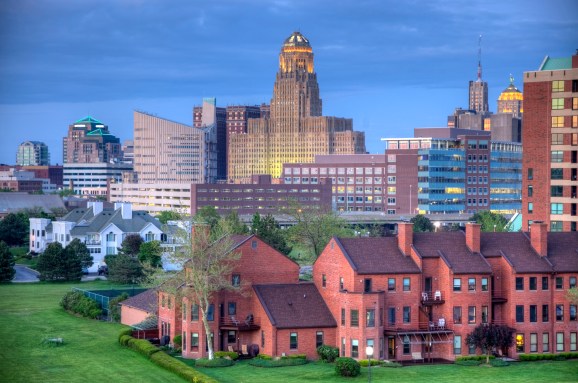 Details about the project are slim, but Techstars is hiring someone who will be based out of Buffalo to help the startup community host more events, conduct surveys and assessments to pinpoint areas for improvement, and connect local entrepreneurs with mentors and graduates of Techstars accelerators in other parts of the world. A consortium of public and private partners in New York — including the state economic development arm, Empire State Development — are paying an undisclosed amount to help bring the Techstars program to Buffalo.

Techstars cofounder Brad Feld said in a phone interview with VentureBeat that one of the program’s goals is to allow cities to “be part of a much greater set of activities, because of the reach of Techstars, and [to allow] Techstars to engage more deeply in cities where we don’t necessarily have an accelerator present.”

Feld, author of the 2012 book Startup Communities, is known for his thought leadership when it comes to ways to make cities more entrepreneur-friendly. He added that the new ecosystem development program is an extension of his thesis that “every city in the world that has at least 100,000 people should have a vibrant startup community, and in fact it’s a requirement [for] cities to stay relevant and fresh over a long period of time.”

David Cohen, another Techstars cofounder, told VentureBeat that the most frequent request the organization receives from cities is to launch an accelerator program there. Nearly 1,600 companies have gone through one of Techstars’ more than 40 accelerator programs since the organization launched nearly 12 years ago. Some of the most notable startups to come out of Techstars include SendGrid, which went public and was acquired by Twilio in a $2 billion deal last year, and PillPack, which was acquired by Amazon last year.

“What we’ve figured out is that [an accelerator] is not always the answer,” Cohen told VentureBeat. He said what Techstars is trying to emphasize with the new ecosystem development program is that what’s really valuable for cities is the investors, entrepreneurs, and industry experts it has access to, adding “we really want to leverage this network we’ve built to enable entrepreneurs to be more successful.” This means that a Buffalo-based enterprise software startup could look for new customers within the Techstars network, or an energy tech startup could look among the list of Techstars’ accelerator sponsors for corporate investors.

Cohen emphasized that Techstars is not seeking to become the “leader” of startup community-building efforts in Buffalo, but rather to partner with startup organization 43North, one of the main vehicles through which the city has sought to recruit more entrepreneurs to the city.

Funded in part by New York’s “Buffalo Billion” initiative — an ambitious, albeit controversial, state-backed attempt to supercharge economic growth in the city — 43North awards $5 million in funding annually to startups through a pitch competition. 43North says that it has invested in 44 startups since 2014, though those startups remain small, having just created more than 350 local jobs between them.

43North chair Eric Reich told VentureBeat that within the past couple years, the organization has shifted its focus to more mature startups with revenues of around $1 million and a handful or two of employees. Compared to the pre-revenue startups 43North used to invest more in, Reich told VentureBeat that “the future of that [type of] company is much easier to see” and it is easier for “the benefits to be obvious.” He believes these companies might get more out of connecting with Techstars.

“We also think that there are significant opportunities from the Techstars network of the companies,” Reich told VentureBeat. “[Those] that are not ready for admittance into a Techstars accelerator … could certainly be candidates or contestants in the 43North process.”

Techstars says it hopes to launch the startup ecosystem development program in other cities soon but doesn’t have an exact timeframe.