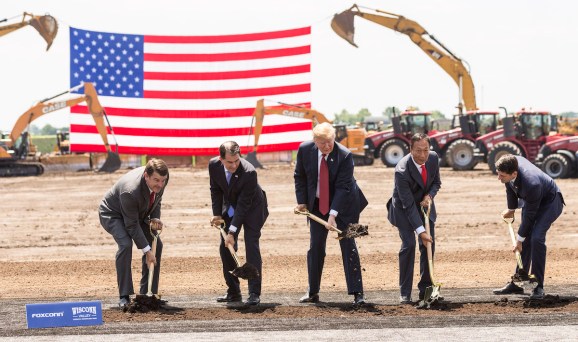 Electronics giant Foxconn’s plans to build an advanced manufacturing facility in Wisconsin continue to change, and after meeting with President Donald Trump on Friday, the company said it was recommitting to building a type of facility it had previously voiced concerns about.

“After productive discussions between the White House and the company, and after a personal conversation between President Donald J. Trump and Chairman Terry Gou, Foxconn is moving forward with our planned construction of a Gen 6 fab facility, which will be at the heart of the Wisconn Valley Science and Technology Park. This campus will serve both as an advanced manufacturing facility as well as a hub of high technology innovation for the region,” Foxconn said in a statement to CNBC.

President Trump also tweeted about the meeting, saying that there was “great news on Foxconn in Wisconsin after my conversation with Terry Gou!”

The news comes on the heels of an interview with Reuters on Wednesday, in which Foxconn’s Louis Woo, a special assistant to Gou, said that Foxconn was considering scaling back or canceling plans to build LCD screens for televisions in Wisconsin. Woo said that “in terms of TV, we have no place in the U.S.,” because the cost of manufacturing in the U.S. was so high, and that “you can’t use a factory to view our Wisconsin investment.”

Even before the interview with Reuters on Wednesday, critics of Foxconn were skeptical that the Wisconsin factory would actually get built, as earlier promises by the company to build factories in Pennsylvania and Brazil, among other places, have not come to fruition.

Foxconn first committed to building a factory for LCD screens in Wisconsin, among other facilities in the summer of 2017. As a result, Wisconsin lawmakers awarded Foxconn an incentives package that totaled around $4 billion by the time it was complete — the largest incentives package a U.S. state has ever awarded to a foreign company. Foxconn said that the facility could bring up to 13,000 jobs to the state.

Since the deal with Wisconsin was announced in 2017, Foxconn has been slow to hire — according to Reuters, the company hired 178 full-time employees last year, 82 people short of the amount of jobs Foxconn needed to hire for in order to receive a $9.5 million tax credit.

In an email to VentureBeat earlier this morning, Foxconn also named seven other types of facilities it was building as part of its “Wisconn Valley Science and Technology Park” including a high-precision molding factory, a research and development center, and a rapid prototyping center for startups. Foxconn’s also committed to investing in a new research facility at the University of Wisconsin-Madison and in a venture fund focused on Wisconsin startups. With so many irons in the fire, it’s likely Foxconn’s plans will continue to change.

VentureBeat has reached out to Foxconn for additional comment, and will update this story if we hear back.