Chances are you already compare clothes, hotels, airline tickets, gadgets, doodads, and knick-knacks online before you make a purchasing decision, so why not add insurance policies to the list? It’s a practice more common abroad than in the U.S. — a 2016 survey by Finaccord found that 40 percent of U.K. customers signed up for plans for the first time or switched carriers online, compared to the fewer than 5 percent of folks stateside who opted to do so — but it’s a burgeoning business. In 2017, roughly 25 percent of U.S. drivers bought car insurance on the web.

San Francisco startup CoverHound, which was founded nine years ago by industry veterans hailing from Unitrin Direct and InsWeb, has ridden the insurance digitization wave pretty successfully. It’s sold more than 200,000 policies to date and in 2016 moved into the cyber insurance sector through its subsidiary, Cyberpolicy. And it’s raising cash to fuel growth to come.

CoverHound today revealed that it has raised $58 million in a series D round led by global insurer Hiscox, with participation from Chubb, Aflac Ventures, and Japan-based MS&AD. It worked with Allen and Company on the series D, which comes on the heels of a $33.3 million series C round in September 2015 and brings Coverhound’s total raised to $112 million.

The capital will enable CoverHound to expand its offices beyond San Francisco and Westlake Village, California to Charlotte, North Carolina, CEO Keith Moore said, and sets the stage for its international expansion efforts into Japan and other markets. 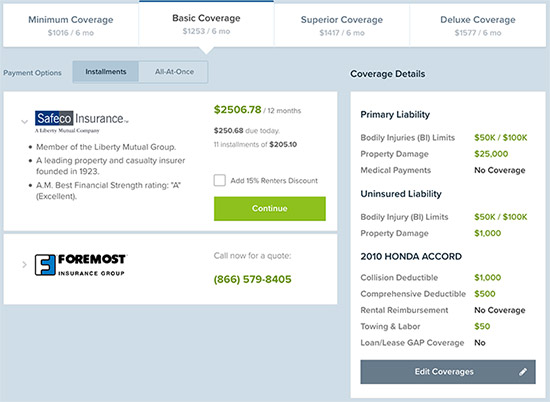 “The future of digital insurance distribution will continually shift to more non-traditional insurance brands,” Moore said. “In an industry that’s been heating up with a flurry of new entrants, we feel blessed that we know exactly who we are and what we excel at.”

CoverHound, for the uninitiated, searches across more than 40 carriers — including familiar brands like 21st Century, Acuity, Century National, Infinity, Liberty Mutual, Progressive, State Auto, Workmen’s, and Nationwide — of both business policies (e.g., general liability and workers compensation) and personal auto, homeowners, renters, and life insurance. It sells business insurance in every state, and personal in every state excepting Alaska, Hawaii, and Massachusetts.

Here’s how it works: Prospective customers provide basic personal information and specify the sort of policy they’re looking for, and get in return a list of plans and prices from which to choose. It’s curated by CoverHound’s in-house team of insurance advisors, who hunt for top options from insurers vetted by rating agency A.M. Best and who take pains to ensure eligible discounts are applied to each policy. Somewhat uniquely, the advisors work directly with carriers, enabling CoverHound to show actual rates and sell plans on providers’ behalves.

“CoverHound has built the leading … platform to enable any brand’s customers to easily quote, compare and buy personal, business and cyber insurance,” Moore said. “[Our] digital, trusted advisors for curated choice for anyone needing personal or business insurance.”

CoverHound’s relationship with purchasers doesn’t end once a policy decision has been made. It offers fulfillment in addition — after a claim’s been signed, CoverHound agents service the plan, monitoring and adapting it as the policyholder’s needs change.

CoverHound’s portal is free to use — its insurance advisors aren’t compensated on sales commissions — and the company says it doesn’t sell customers’ data in exchange for cash. Rather, it’s compensated by carriers based on referrals and fulfillment, the latter of which brings in between 12 percent and 40 percent of the premium price.

It’s a good time to be in the insurtech business. According to recent analyses conducted by XL Innovate, based on CB Insights data, over $1 billion has been invested in commercial insurance startups since 2015, and FinTech Global reports that deals totaled $2.5 billion in the first three quarters of 2018 (an 89.8 percent increase year-over-year).

CoverHound sees lots of potential in cyber, which alone is projected to be a $22.8 billion business by 2024, according to Zion Market Research. Moore says that CyberPolicy’s expanded insurance offerings — which became available through Progressive Insurance in November — now cover 98 percent of small business types with up to $250 million in revenue, including those with 15 or fewer employees.

“We’re honored to have such legendary industry leaders from around the world supporting us in our latest funding round,” he added. “As both a technology and insurance company, we’re in a unique position to empower trusted brands for the digital distribution of personal and business insurance.”