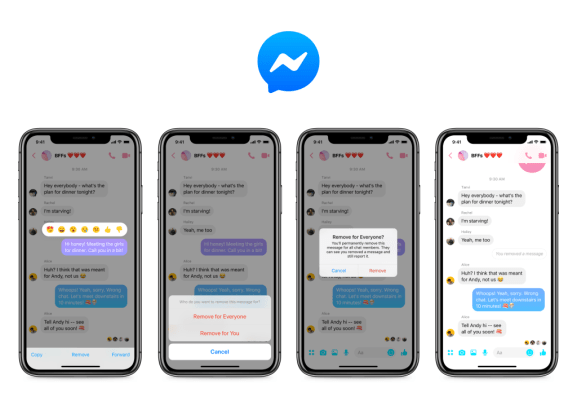 Facebook Messenger announced today that it’s rolling out an ‘unsend’ feature that will give users the ability to remove a message from a one-on-one or group chat for up to 10 minutes after it has been sent.

When Messenger users tap on a message they’ve sent within the last 10 minutes, they’ll now see the “remove for everyone” feature. When a user chooses to remove message for everyone, other members of the chat will be notified of the action. The feature will be available for all users on iOS and Android.

Messenger first announced that it was working on an unsend feature for all users in April, after a TechCrunch report revealed that CEO Mark Zuckerberg and other Facebook executives had the ability to schedule their messages to be deleted from a recipient’s inbox after a certain period of time. The company said it added the feature after Sony executives had their emails hacked in 2014.

The new feature also comes a week after Zuckerberg told investors on Facebook’s Q4 2018 earnings call  that the company was committed to making more of its products ephemeral, in response to growing user demand.