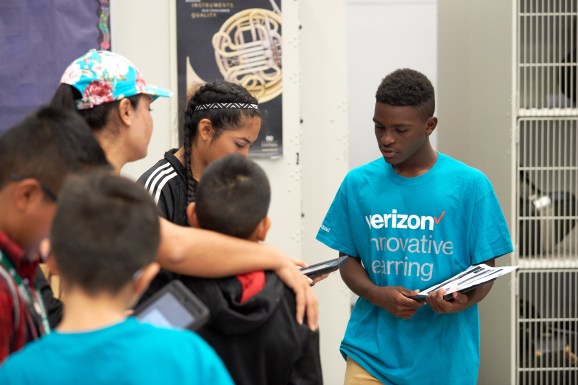 While 5G technology continues to spread across the globe, carriers are trying to find uses for their ultra-high-bandwidth, low-latency wireless networks — a challenge properly incentivized smart people will tackle. To that end, Verizon today revealed the winners of its 5G EdTech Challenge, a million-dollar contest to create educational experiences using 5G technology, in the process revealing three additional cities that will likely get Verizon 5G networks this year.

As previously announced, each of 10 winners will receive $100,000 in funding for their projects, as well as access to Verizon’s 5G network and expert training resources, with the goal of deploying the experiences for the fall 2019 semester. Though Verizon has launched 5G services in Houston, Indianapolis, Los Angeles, and Sacramento, none of the award winners is in one of those cities: Eight are in New York City, one is in Atlanta, and the last is in Medford, Massachusetts near Boston.

While some of the winning experiences will be school-specific, others will take place in museums or public spaces, assuming that Verizon has mobile 5G networks installed by this fall. Notably, though the contest was open to AI, AR, and VR uses of 5G, it appears that all of the winning projects used VR or AR, with none conspicuously spotlighting AI. The winners are:

While Verizon hasn’t officially named Atlanta, Boston, or New York City as 5G network recipients, the company has previously dropped clues regarding plans in at least two of those cities. It has conducted commercial 5G tests and set up a 5G incubator in New York City, as well as announcing collaborative 5G media partnerships there. Former Verizon CEO Lowell McAdam also hinted at Boston last May. And rivals AT&T and Sprint have both announced 5G plans for Atlanta.

Verizon says that the new concepts will enable it to “be the first to introduce 5G technology to classrooms across the U.S.,” and expects evolved versions of the projects to roll out in Verizon Innovative Learning schools in fall 2019. The carrier hasn’t yet announced the specific 5G-ready hardware that will be used in any of the projects.