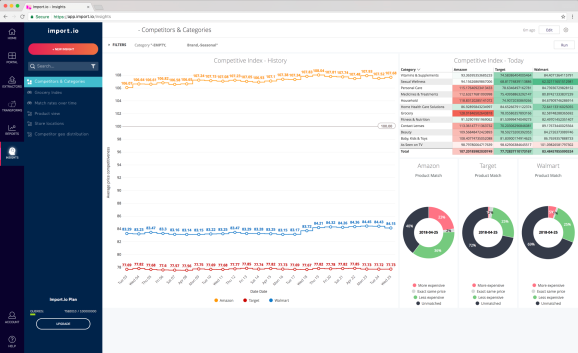 Import.io, a Los Gatos, California-based startup developing a toolset that can automatically scrape and process web data, today announced that it’s acquiring enterprise data extraction company Connotate for an undisclosed sum. The deal, Import.io CEO Gary Read said, will enable the company to scale and meet “fast-growing” enterprise demand, bolster its IP (Connotate has eight patents to its name), and allow it to “further solidify” its leadership in a market that’s forecast to be worth $5 billion in 2019.

“With Connotate, Import.io is acquiring blue-chip enterprise customers, innovative technology, and outstanding domain expertise, further establishing us as the undisputed leader in web data integration,” Read added. “External spend on web data extraction is growing 70 percent annually as organizations shift from internal engineering-led projects to enterprise-class SaaS. This acquisition will help us to continue to rapidly scale to meet the exploding demand for our solution and, most importantly, will further enable us to help our customers achieve success and competitive advantage. All customers, whether currently with Connotate or Import.io, will benefit.”

Import.io will retain almost all of Connotate’s employees (about 30 people) and will consolidate the company’s technology into a solution that’ll be available to all of its current customers. Additionally, Import.io will migrate Connotate’s 70 clients — among them Dow Jones, Cox Automotive, and Capital One Services — into its customer base, which will stand at 850 post-acquisition.

Connotate founder Vincent Sgro will assume the role of chief scientist at Import.io. He’ll be joined by Kelley Scott and Gina Cerami, who will be appointed director of software engineering and vice president of marketing, respectively.

“We are thrilled to be joining Import.io. This is a great opportunity for our customers, our employees, and our success,” said Sgro. “We’ve competed against Import.io for a long time and were always very impressed by their leadership and continued success. Joining forces means bigger and better things for both our customers and theirs.”

For the uninitiated, Import.io employs machine-driven software that not only extracts data, but prepares and integrates it into customers’ analytics platforms and business applications — in essence, transforming websites into APIs. The company’s data-crawling suite boasts more sophisticated features, too, such as the ability to merge information from multiple sources and create a common schema, in addition to various reporting and visualization functions.

Import.io says that it extracted data from over 5.5 billion web pages in 2015 alone.

News of the acquisition follows Import.io’s $15.5 million series B round in December, which brought its total capital raised to $33 million.