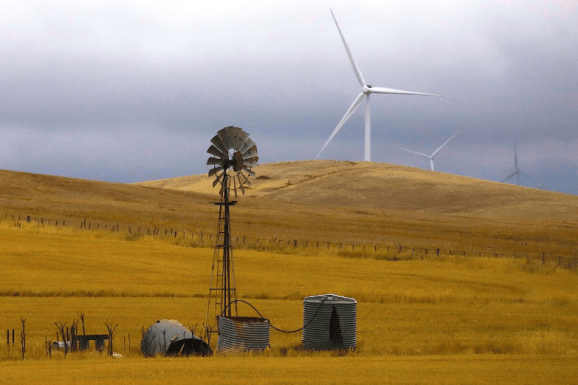 An old windmill stands in front of wind turbines in a paddock near the Hornsdale Power Reserve, featuring the world's largest lithium ion battery made by Tesla, located on the outskirts of the South Australian town of Jamestown, December 1, 2017.

Ice is the enemy of turbines everywhere. Some wind farms report energy production losses of up to 20 percent due to icing, according to Canadian wind-industry consultancy firm TechnoCentre Éolien (TCE), and that’s not the worst of it. Over time, ice shedding from blades can damage other blades or overstress internal components, necessitating costly repairs.

There’s a clear and present use case, then, for an AI system that detects wind turbine icing. Fortunately, that’s just what a team of researchers recently described in a paper published on the preprint server Arxiv.org (“WaveletFCNN: A Deep Time Series Classification Model for Wind Turbine Blade Icing Detection“).

“[W]e propose a data-driven approach to inspect blade icing precisely on real-time signals so that … deicing procedure[s] can be started automatically with a very short response time,” they wrote. “We effectively combine the deep neural networks and wavelet transformation to identify such failures sequentially across the time.”

The team’s system — WaveletFCNN — is based on a Fourier convolutional neural network (FCNN), a fully convolutional neural network for time series classification. It’s augmented with coefficients from wavelets — wavelike oscillations with amplitudes that begin at zero and increase before decreasing back to zero. (They look like the peaks and valleys you might see on a seismograph or heart monitor.) In tests, WaveletFCNN outperformed state-of-the-art AI systems in 64 out of 85 datasets, and it’s subsequently been used to detect anomalous signals collected from a wind farm.

The researchers first trained WaveletFCNN to classify time series — i.e., series of data points indexed in time order — with input data generated by general-purpose sensors that record wind speed, internal temperature, yaw positions, pitch angles, power output, and other weather and turbine conditions. Then, they designed a secondary component — an anomaly-monitoring algorithm — to suss out signs in the data of frozen blades. In a set of simulations conducted on data from Goldwind, one of the largest wind turbine manufacturers in China, WaveletFCNN had a prediction accuracy of 81.82 percent, compared with the original FCNN classifier’s 65.91 percent.

The researchers concede that AI models like WaveletFCNN can sometimes too closely correspond to smaller training corpora, and say that training separated models for each turbine would have better accounted for variations in climate and working status. Still, they believe the system and others like it could help prevent turbine damage from hard-to-detect ice accretion, and they plan to deploy it in real-world wind farms in the future.

“Wind farms usually locate in remote mountainous or rough sea regions, which makes monitoring and maintenance more challenging,” they wrote. “[Such a] fault detection system will help to avoid premature breakdown, to reduce maintenance cost, and to support for further development of a wind turbine.”

Theirs isn’t the first to detect damage in wind turbines with AI. Shanghai and Seattle company Clobotics is developing a platform employing photo-snapping drones which feed data to machine learning models that identify weakened components.