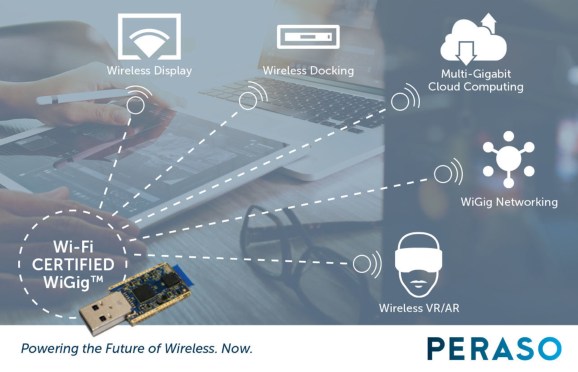 Peraso Technologies, a Toronto-based fabless semiconductor company developing wireless networking chips based on the Wi-Fi Alliance’s Wireless Gigabit (WiGig) standard, today announced that it has raised $42 million in financing co-led by two strategic investors and existing partner Roadmap Capital. This comes after the company secured $20 million in a series C round close to three years ago and brings Peraso’s total capital raised to $79.3 million, according to Crunchbase.

Bill McLean, who was named president and CEO of Peraso last February, said the influx of cash will be used to “take … sales to the next level.”

“This latest round of funding reaffirms our investors’ confidence in the progress that the company is making and the future for both Peraso and the quickly expanding market for mmWave technology-based products,” he added. “[A]n increasing number of consumer electronic and wireless infrastructure manufacturers choose to incorporate multi-gigabit wireless connectivity into their products.”

Peraso is currently pursuing several projects, including WiGig transceiver integrated chip solutions for the fixed wireless market that’s expected to reach 8 million subscribers in the U.S. by 2021. The company’s products operate in the short-range 60GHz wireless spectrum, which Peraso contends is far less congested than the 5GHz band on which most consumer devices operate. The company claims its flagship W-series chip is capable of achieving speeds in excess of 7Gbps — roughly 10 times faster than traditional Wi-Fi networks.

In early 2018, Peraso took the wraps off a virtual reality WiGig reference hardware — the V125 — that enables companies to build VR headsets with integrated wireless support. More recently, at the 2019 Consumer Electronics Show in January, the company showcased wireless video products and a 10Gbps 802.11ad home networking platform. In past years, it has also demonstrated WiGig USB dongles and access points.

“Roadmap is very thrilled to see Peraso bringing new strategic investors to its shareholder base. It is a validation of the superior performance of Peraso’s solution,” Imed Zine, principal at Roadmap Capital, said of today’s news. “We are very excited to support the growth phase of Peraso in fixed wireless, millimeter wireless links for 5G, and WiGig-based consumer electronics.”

Peraso was cofounded in 2009 by Brad Lynch, Ron Glibbery, and University of Toronto professor Sorin Voinigescu, and it currently has 90 employees.