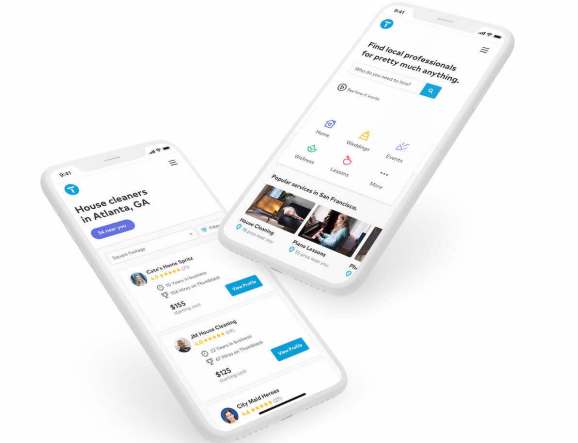 Thumbtack is an online marketplace that helps connect contractors and gig workers with clients.

Thumbtack, a platform that helps graphic designers, photographers, electricians, and other independent contractors find clients, today announced that it’s launching a pilot partnership with Alia, a benefits platform for house cleaners, as part of an effort to bring portable benefits to more contract employees.

First launched in December, Alia was developed by the innovation arm of the National Domestic Workers Alliance, which seeks to “experiment with new strategies for improving marketplace norms for domestic workers.” The lab also received a grant from Google.org to develop Alia. Since many domestic workers and other contract employees don’t have an employer who can cover the cost of things like insurance or a sick day, Alia turns to the workers’ clients to help cover that expense. Cleaners who participate in Alia will first be asked to provide the phone numbers of their clients. Alia then texts or calls the client and asks if they want to contribute $5 for each cleaning so that their cleaner can accrue enough money to access a variety of benefits — accruing $120 could equal one paid day off, for example.

When Alia launches its pilot partnership with Thumbtack, the service will be available to house cleaners who are signed up on Thumbtack in New York or California. For the first six months of the program, Thumbtack says it will contribute a $25 benefit credit to each eligible Thumbtack worker who signs up for Alia — until it reaches a total contribution of $20,000. The types of benefits cleaners will be able to access include paid time off, as well as disability, accident, and life insurance — but no health insurance as of yet.

Thumbtack CEO Marco Zappacosta said Alia’s model appealed to him because it leverages the relationship built between contract workers and their clients.

“When you have a recurring relationship with a service professional, particularly one that’s coming into your home, that’s exactly the type of relationship where you really care about this person — it’s intimate, you know them, you want to be able for them to take care of themselves and their family,” Zappacosta told VentureBeat in a phone interview. “So this feels like the right type of customer to engage with and see whether they would pay an additional fee explicitly in support of the professionals who work in their house.”

Zappacosta said he hopes the pilot with Alia will be the first of many tests Thumbtack undertakes as it works to get the hundreds of thousands of contract workers using its platform access to the types of benefits traditionally reserved for W2 employees in the U.S.

“We’re going to keep chipping away at this — the most important thing is that new ideas are being tried,” Zappacosta told VentureBeat, adding that the company’s also looking for partners willing to explore “innovative funding models, innovative group buying models, private-public partnerships, and platform partnerships.”

Lots of tech companies that work with 1099 workers, like Uber, have expressed interest in finding ways to give their contract workers access to traditional employment benefits. But it has proven to be a difficult task in the U.S., particularly as health insurance is expensive.

The Alia model is only applicable to a small subset of workers classified as independent contractors — those who work with the same clients on a recurring basis. But it could be an important test to see how willing clients are to help contract workers access benefits.

Senator Mark Warner (D-VA), who frequently weighs in on tech issues, has urged Congress to pass legislation leading to the creation of portable benefits that would follow workers after they leave a job, rather than forcing them to stay with a company in order to keep their benefits. The Department of Labor reported last summer that 10.1 percent of the U.S. workforce is currently made up of independent contractors.

Thumbtack, founded in 2008, has raised about $260 million in venture capital from funds such as CapitalG, Alphabet’s growth equity investment arm, and Sequoia Capital. The company has just over 600 employees, with offices in San Francisco and Salt Lake City.