These big companies are showing confidence in Hedera Hashgraph‘s blockchain alternative for the enterprise, which started application testing in December.

Hedera has created the Hedera Wallet, sample applications, and a micropayments Chrome extension for consumers to test using hbars. Hedera’s vision is to create a more trusted, secure, and empowered digital future for everyone. Developers will enable this world by building trusted applications that allow people to play games together, work together, and buy and sell goods and services safely and securely — without entrusting their data and privacy to a central organization.

A council for long-term stability

Any blockchain infrastructure needs trust in order to sustain itself over time. The goal behind the Hedera Governing Council is to create a diverse and trusted set of members who can govern any changes to the Hedera software run by millions of distributed nodes over time.

The governing council is supposed to bring stability and guaranteed continued decentralization to the Hedera Hashgraph distributed public ledger.

The organization also announced a livestream of its first annual summit, which will be held on February 20 in Seoul, South Korea. Hedera wants to help create a safer, fairer, more secure internet — one in which online communities can collectively create and evolve shared worlds in cyberspace and on which developers can build trusted applications that enable safe collaboration and commerce, without entrusting a central organization with personal data.

To realize this vision, Hedera has focused on addressing four fundamental roadblocks to the adoption of public distributed ledgers — technology, security, stability, and governance.

Public distributed ledgers aim to provide decentralized systems anyone can participate in and benefit from. But a peer-reviewed study from the Initiative for Cryptocurrencies and Contracts (IC3) at Cornell University, titled “Decentralization in Bitcoin and Ethereum,” found that the world’s largest public ledgers have actually become more centralized over time.

The study found that the top four Bitcoin miners and top three Ethereum miners control more than 50 percent of the world’s hash rate, in part due to the lack of a governance model that would ensure continued decentralization.

The Hedera network does not require mining or proof of work, and it plans to address ongoing decentralization concerns by separating governance from consensus. The governance model is based on the original model used by National BankAmericard, founded in 1968, and later renamed Visa. It is designed in a way that ensures the governing council can be trusted to do what’s in the best interest of the Hedera network, that no single company has control, and that the council cannot be unduly influenced by individual members or node operators.

“A general-purpose public ledger should be governed by representatives from a broad range of market sectors and geographies, each with world-class expertise in their respective industries,” said Hedera CEO Mance Harmon in a statement. “With this inaugural group, we are demonstrating the caliber of organizations it takes to deliver long-lasting, stable governance for the industry’s first enterprise-ready public ledger suitable for mission-critical applications.” 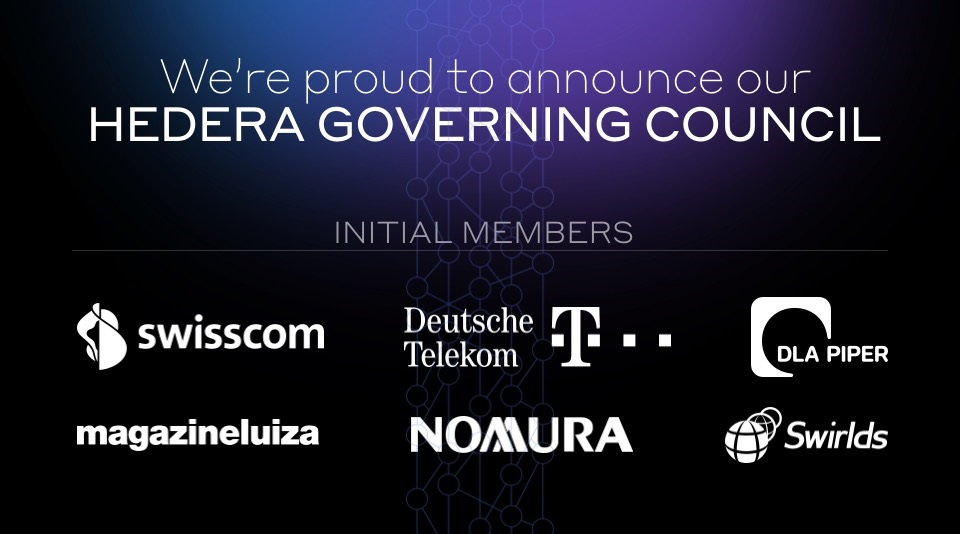 Above: These companies are part of the governing council for Hedera Hashgraph.

“Distributed ledger technology is fundamentally changing business models and will evolve all types of systems in our society,” said John Calian, head of T-Labs and the Blockchain Group at Deutsche Telekom, in a statement. “Hedera has uniquely thought through the security, governance, and scalability concerns that have hampered early iterations of blockchain technology, and have created a public distributed ledger and governing council that will ensure long-term stability, distributed governance, and security. We are thrilled to be an initial governing member of the Hedera Hashgraph Council, to help shepherd this important technology as it is adopted by the market.”

Hedera raised $100 million to build its blockchain alternative last fall. To date, the company has raised $124 million, and it currently has 65 employees. Swirlds, which is affiliated with Hedera’s founders, is a permanent member of the governing council.