The influx of cash comes nearly nine years after ThousandEyes received a $150,000 National Science Foundation grant in 2011 to focus on DNS infrastructure troubleshooting, and after a much more recent $35 million series C funding round in February 2016. It brings the company’s total capital raised to $110 million, and will be used to “execute” on strategic growth initiatives and “expand” global operations, Lad, who serves as CEO, said.

“This new funding round will allow us to further invest in both product innovation and global expansion,” he added, “as we quickly find our solution becoming a non-negotiable piece of the modern operations stack that’s necessitated by the rapidly growing $206 billion cloud market.”

ThousandEyes now counts 20 of the 25 top software-as-a-service companies, six of the top seven U.S. banks, and four of the top five U.K. banks as customers. That’s in addition to the over 65 percent of the Fortune 500 and over 120 of the Global 2000 that currently pay for its services, among them heavy hitters like Evernote, Box, Comcast, PayPal, Geico, DocuSign, Slack, and Whitepages. 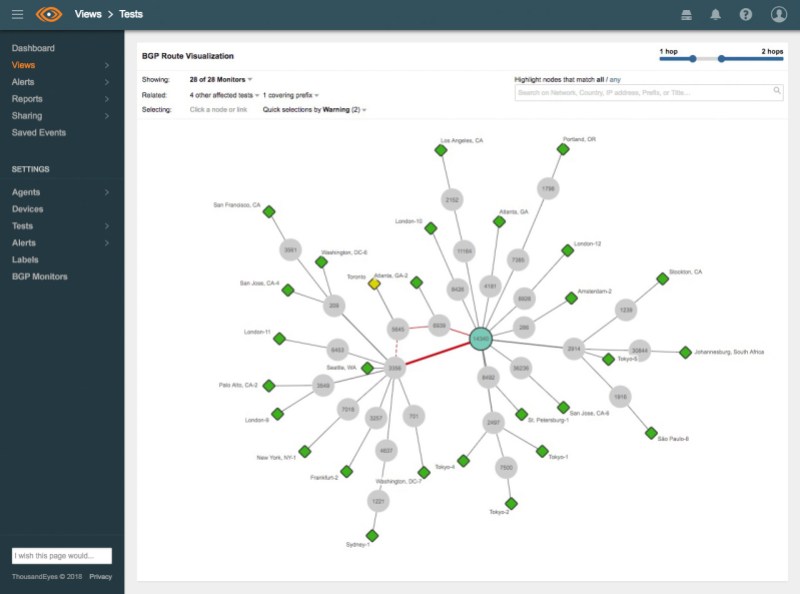 “Over the last year, we have seen unprecedented growth as both domestic and international demand for digital experience intelligence continues to increase at an extraordinary pace,” Lad said.

ThousandEyes uses synthetic monitoring probes to measure network performance, allowing IT teams to collate data across network hops while algorithms flag potential sources of disruption like DNS and VoIP exploits, BGP vulnerabilities, and outages. Additionally, it provides visualizations for “multiple layers” of network and forensics intelligence on topologies and dependencies, all of which integrate with most existing workflows and systems.

But what really sets ThousandEyes apart from the competition, according to Lad, is its ability to monitor operations over third-party datacenters with pre-provisioned infrastructure-as-a-service vantage points. That enables it to detect anomalies like when Google traffic is mistakenly routed through Russian and Chinese internet service providers, as it was in November 2018, or when cuts to Comcast fiber slow down service for millions of Internet users.

ThousandEyes became even more capable last year when it incorporated coverage of multicloud environments and support for additional broadband providers.

“ThousandEyes is seeing remarkable traction with Fortune 500 customers and this sustained growth is a testament to the scope of the network visibility problems they continue to solve,” Dave Munichiello, general partner at GV, said. “As enterprises increasingly rely on applications and services in the cloud, their CIOs and CTOs are losing visibility and control of the networks and outages impacting end-user digital experiences. ThousandEyes delivers mission-critical visibility into every network an enterprise relies on, and ultimately has an objective view of enterprise services, clouds, and their performance that is unparalleled in the technology ecosystem.”

ThousandEyes has offices in London, New York, Austin, and Tokyo, and recently opened new operations in Ireland, Australia, Germany, and the Netherlands. Full-time employee headcount increased by 25 percent this year to 250 employees, the company says.