Google says it’s made significant progress toward an efficient, reliable, and scalable means of controlling quantum systems’ electronics — systems it it hopes will someday solve computationally complex problems beyond the reach of classical machines.

At the International Solid State Circuits Conference in San Francisco this week, researchers on the company’s AI Quantum team unveiled a cryogenic controller fabricated using CMOS technology and designed in partnership with University of Massachusetts professor Joseph Bardin. Google says the 1-millimeter-by-1.6-millimeter controller — which provides an instruction set for single-qubit operations — runs at between room temperature and 3 degrees Kelvin (about -454.27 degrees Fahrenheit) and consumes less than 2 milliwatts of power — 1,000 times less power than Google’s current control electronics. (Quantum computers operate in extreme cold in order to limit the amount of energy introduced into the system, and to minimize the chances a qubit — the quantum version of binary digits, basically — inadvertently flips between quantum states.)

Currently, Google runs programs on its prototypical Bristlecone quantum processor by applying gigahertz-frequency analog signals produced by digital-to-analog waveform generators packaged in server room racks. These signals travel along coaxial cables to the processor’s 72 qubits, manipulating their states and measuring the outcomes. Each qubit has two control lines for a total of 144 unique control signals, and the generators dissipate about a watt of waste heat per qubit — an arrangement that isn’t particularly conducive to chips containing more qubits. Research suggests that first-generation quantum computers will require as many as 1 million qubits, and Google estimates that just 150 waveform generators could overwhelm its cooling system by 1,500 times. 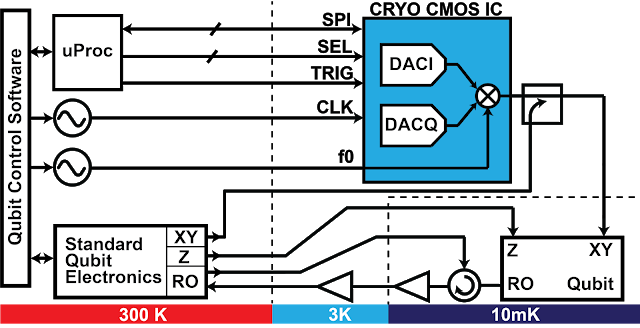 Above: A schematic of Google’s qubit control and management system.

Google’s new custom integrated circuits, by contrast, control qubits from within the cooling system, reducing the number of physical connections needed to and from quantum processors. According to Google, baseline experiments for the controller hardware show “similar” performance compared with its standard qubit control electronics.

Bardin and Erik Lucero, staff research scientist and hardware lead on Google’s AI Quantum Team, caution that it’s merely a first step toward a “truly scalable” qubit management system — the controller only addresses a single qubit, and it still requires several connections to room temperature. Still, they say it’s promising progress in the pursuit of reducing the energy required to control qubits while maintaining the control required to perform “high-quality” qubit operations.

“Increasing the number of physical qubits needed for a fault-tolerant quantum computer while maintaining high-quality control of each qubit are intertwined,” Bardin and Lucero wrote in a blog post, “and exciting technological challenges that will require inventions beyond simply copying and pasting our current control architecture.”