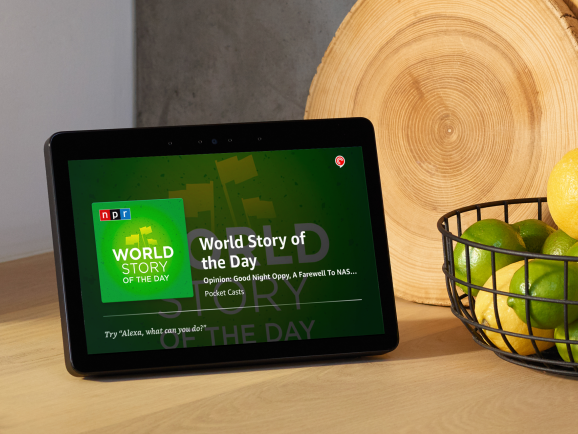 If you would rather consume podcasts through a smart speaker or smart display than on a smartphone, good news: Pocket Casts just made it easier. The podcast management and discovery app today announced that it’s rolling out a skill for Amazon’s Alexa that lets listeners control playback, ask for recommendations, and queue up new episodes with voice commands.

The skill’s debut comes amid continued growth for  Pocket Casts, which claims that users now tune in an average of 10 hours per week, or about 51 percent more than the average podcast listener.

“With more than 100 million Alexa devices now in use and podcast listening on the rise, launching an Alexa skill helps to deliver the simple, yet powerful user experience that Pocket Casts listeners desire,” the company said in a statement.

Here’s a list of commands the new skill recognizes:

According to a survey conducted by Edison Research, podcasts are among the most popular form of content consumed on Amazon’s Echo lineup, Google’s eponymous Google Home portfolio, and other assistant-imbued devices. More than 39 percent of smart speaker owners report listening to podcasts on these devices at least once per week, and 74 percent say they do so directly on their speaker (meaning they say commands like, “Alexa, play a podcast”).

Podcast production and listenership have seen an enormous uptick in recent years. Apple in early 2018 said that there were over 525,000 active shows and over 18.5 million episodes on iTunes. And according to a study conducted last year by research firm Infinite Dial, more than 44 percent of the U.S. population — 124 million people — have listened to a podcast. That’s up from 40 percent in 2017.

It’s been a boon for advertisers. Recent data from the Internet Advertising Bureau (IAB) suggests that digital audio advertising revenues rose 42 percent to $603 million in the first half of 2017 and hit $1.6 billion by the year’s end.