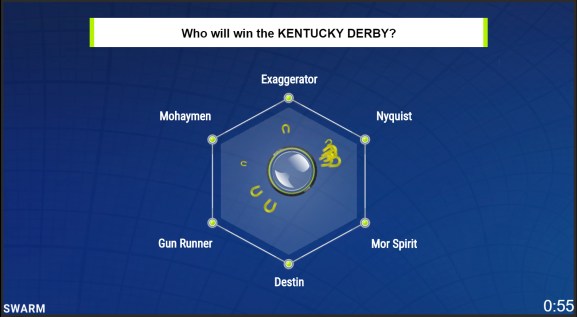 What if AI performed better with the aid of humans than it ever could alone? That’s the question Unanimous AI, a startup headquartered in San Francisco, has been asking for the better part of four years, and skeptics will soon be able to suss out the answer for themselves. Ahead of SXSW in Austin, Texas, where Unanimous was selected as a finalist for the conference’s 2019 awards, the company announced the beta launch of Swarm, an on-demand software-as-a-service (SaaS) platform for amplifying business decision-making with AI.

Uniquely, Unanimous’ platform leverages swarm intelligence, a biological phenomenon in which groups of organisms (like birds, bees, and fish) form closed-loop systems to produce insights. Team members — i.e., salespeople, marketers, engineers, accountants, executives, HR reps, analysts, influencers, and others — log into Swarm through a web browser using a PC or mobile device and collectively attempt to move a cursor toward the answer to a question. All the while, algorithms infer swarm members’ conviction based on their cursor motions and weigh their contributions accordingly.

“Humans have experience, knowledge, wisdom, and intuition that’s not being represented in these big datasets,” Stanford-educated computer scientist and CEO Louis Rosenberg told VentureBeat in a recent phone interview. “Over the last four years, [the system] has learned from hundreds of thousands of questions. You can think of it as a system of feedback loops. It’s aggregating sentiment.”

Above: Participants in a ‘swarm’ working toward a consensus.

The idea has merit. In a study conducted with the Stanford University School of Medicine, Unanimous’ system diagnosed pneumonia “significantly” more accurately — 22 percent more, to be precise — than a team of radiologists working independently and reduced errors by 33 percent. It has also forecasted the past three years’ worth of Oscar winners more accurately than any publication, as well as the Time magazine Person of the Year, President Trump’s approval rating, and the exact score of last year’s Super Bowl.

Perhaps most famously, Unanimous correctly predicted the results of the 2016 Kentucky Derby, beating betting odds of 542 to 1.

For Rosenberg, who helped pioneer one of the world’s first augmented reality systems for the U.S. Air Force in the early ’90s, swarm intelligence is a way to amplify human abilities in ways that AI alone cannot. “Most AI companies are focused on finding patterns in big data, basically, and that only works for data you can put into a database in a very consistent way,” he said. “The question we ask is ‘How can we connect groups of people together and make them smarter using AI’? ‘How can we take groups of people and turn them into artificial experts?'”