Bruce Schneier, a well-known security guru, called on technologists to become lawmakers and policy makers so countries can deal with issues such as the governance of artificial intelligence and cybersecurity.

Schneier teaches at the Harvard Kennedy School of government, and he said the place is crawling with economists because they were able to answer many of the questions that arose in the 20th century. But in the 21st century, change is happening faster, and it’s driven by technology.

The issues are a lot larger than just computer security. Schneier wants more public interest technologists in all areas.

Back in the 1950s, tech and policy didn’t really interact, unless it had to do with something like nuclear weapons or the space program. Today, tech and policy are intertwined, Schneier said.

“Today, technology makes de facto policy that’s far more influential than any law,” he said. “Law is forever trying to catch up with technology. And it’s no longer sustainable for technology and policy to be in different worlds.”

For instance, he said the internet was never designed with any public policy in mind, or with security in mind. Only researchers had access to it. Now it is critical to all aspects of our lives. It is more democratic, distributed, and commercial, and it moves a lot faster.

“Corporations have basically control over free speech and censorship regardless of laws,” he said. “Corporations accept limitations on personal freedom because the technologies are our choice to use. They are for-profit systems. So now we hear terms like surveillance capitalism, algorithmic discrimination, digital divide, information attacks on democracies. These are not terms we heard even five years ago. And this means the internet is no longer a separate thing. It’s no longer its own world. It’s part of consumer policy. It’s part of automobile policy. … It’s part of everything.”

We saw the policy makers and technologies talk past each other when the FBI wanted Apple to break into an iPhone that belonged to a terrorist shooting suspect, Schneier said. The debate over Edward Snowden’s disclosure of the National Security Agency’s eavesdropping programs was another flash point. The need for policy makers to understand technology is clear. 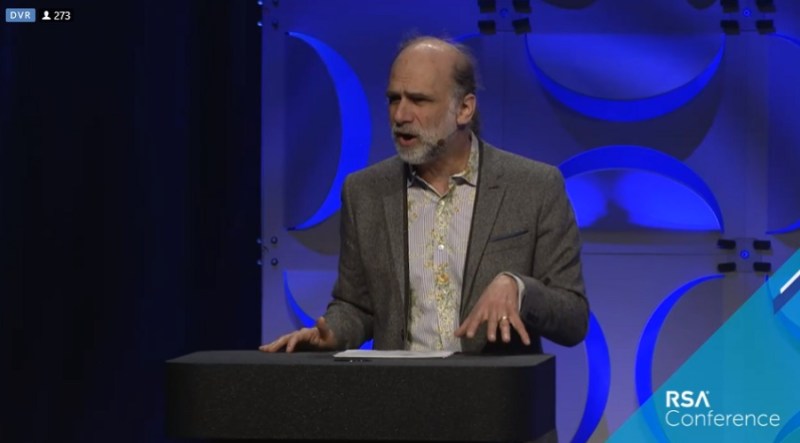 Above: Bruce Schneier wants technology and policy to come together.

“This is no different than any other part of our complex world,” he said. “We don’t expect legislators to be experts in everything. We expect them to get and accept expertise. The second thing we need is for technologists to get involved in policy, and what we need is more public interest technologists” — those who focus on social justice, the common good, and the public interest.

These technologists can address questions about whether the government’s supply chain should include Chinese technology, as the Chinese will ask themselves if they should be dependent on U.S. technology. We also have to know whether there are or should be back doors in technologies such as routers, smartphones, apps, and social networks. Schneier asked whether we are building 5G networks for security or surveillance. He asked how we will deal with privacy issues and propaganda attacks.

“Any policy discussion has to address all of these concerns,” he said. “And we’re not having that debate.”

One member of the audience asked if it was OK for AI experts to create an AI entity that could mimic being a child, and if people should be allowed to adopt such creations.

“These are real, actual policy questions,” Schneier said. “Do we want to build those? What do we do about the fact that there will be a country where those will be built?”

“We are responsible for the vision of the future that we espouse. To make this work, law and policy have to work together,” he said.

He added, “I think we are going to do some rethinking of fundamental social contracts based on how technology is changing so much about our society.”