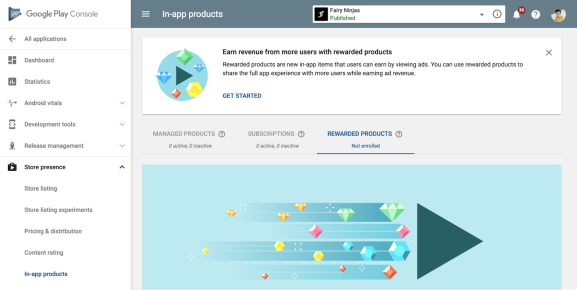 Google is introducing a new way for Android users to earn in-app rewards, and perhaps not a moment too soon — research firm Statista predicts that worldwide in-app purchase revenue will reach a whopping $71.7 billion by 2020. The Mountain View company today launched rewarded products in beta, a new AdMob-powered monetization method that enables app developers to boost revenue while sharing a small, nontangible cut with their user base.

“Developers are increasingly using multiple methods to monetize their apps and games,” Patrick Davis, product manager at Google Play, wrote in a blog post. “One trend has been to reward users for a monetizable action, like watching a video, with in-game currency or other benefits. This gives users more choice in how they experience the app or game, and has been an effective way to monetize non-paying users.”

Above: A rewarded product advertisement.

Rewarded products — which can be added to apps with the Google Play Billing Library and launched from the Play Console, Google’s web dashboard for managing and promoting apps published on the Google Play Store — operate on a simple premise: Users view an advertisement and receive in-game goods or virtual currency in return. “[For] example … user[s] selects ‘watch ad,’ views the video, and then [are] granted 100 coins,” Davis explained. “No extra SDK integration is required. This significantly reduces the work required to implement compared to other offerings.”

Rewarded products must exceed an earnings threshold of $10 before developers can cash out, Google says, and currently, the only available product offering is in a video format. But the company’s leaving open the possibility for new ad types in the future.

The launch of rewarded products comes a day after Google debuted shoppable ads within image searches, which enables advertisers to highlight products for sale within sponsored ads, and after the publication of a study that found that Google and Facebook were the top performers when it comes to ROI for marketing campaigns that place ads in mobile apps and games.