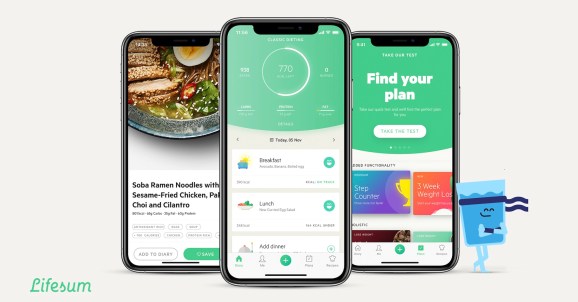 Swedish health startup Lifesum today announced that its eponymous fitness app has amassed 35 million users worldwide. The company has also secured $5 million to expand its business as it looks to fend off growing competition from sporting-goods giants that have launched their own fitness apps.

Lifesum did not disclose how many paying customers it has but said its subscriber count rose 150 percent in the U.S. and 70 percent globally last year. It also announced that it has added more than 2 million users worldwide in 2019 alone. The app, which had about 11 million users in 2015, received a boost in popularity after Apple mentioned it during the unveiling of Apple Watch that year.

The app helps users keep tabs on the number of calories they are consuming and encourages them to keep active, as well as displaying healthy recipes. Its premium offering starts at $3.30 a month.

Lifesum secured $5 million from Balderton Capital, a European early-stage venture capital firm. Lifesum is the first startup Balderton is investing in via its $145 million Liquidity I fund. Founded in 2013, Lifesum had secured $16.7 million prior to today’s announcement.

Henrik Torstensson, cofounder and CEO of Lifesum, told VentureBeat by email that the company is planning to raise a significant round later this year. He added that Balderton is buying from existing shareholders, mainly early employees. NGP Capital and Bauer Media are among its early investors, though neither are selling their stake.

Torstensson said Lifesum will use the fresh funding to grow its business, features offerings, and headcount and to launch in additional markets. The company also plans to expand its U.S. operations.

Lifesum competes with the likes of Adidas’ Runtastic app and Nike’s Run. Adidas bought fitness app Runtastic for $239 million in 2015. As of 2017, the app had over 100 million registered users.