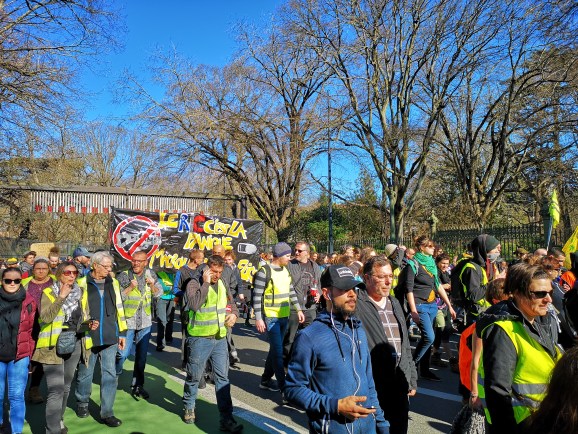 A Yellow Vest demonstration in Toulouse.

For all the company’s talk of weeding out toxic content and clamping down on information warfare, Facebook has generated more than 105 million views of fake news about France’s Yellow Vest movement, a new study says.

According to an analysis of 100 fake news stories conducted by global nonprofit Avaaz, Facebook’s platform is playing a critical role in diffusing propaganda and misleading information about the Yellow Vests, or “gilets jaunes.” Avaaz leads various campaigns surrounding issues such as protecting democratic institutions, corruption, and climate change.

In this case, Avaaz’s team identified 100 stories that various French or international media groups had fact-checked and determined were fake. The organization called on Facebook to take even more aggressive steps to clamp down on such viral fake news.

“Over 100 million views of fake news,” said Christoph Schott, campaign director at Avaaz, in a statement. “This huge number shows how much the Yellow Vest movement has been infected with disinformation. Alarm bells should be ringing across Europe right now, with the upcoming E.U. elections being the ultimate stress test for our democracies’ immune systems.”

The role of social media has been a central part of the debate surrounding the Yellow Vest protests that have swept across France since November, and created the greatest political crisis of President Emmanuel Macron’s government. It’s been clear that Facebook groups have played a key role in organizing the grassroots movement that seemed to erupt spontaneously.

But while some security organizations have criticized Facebook and Twitter for inciting an extreme protest movement, other researchers have argued that their roles have been overblown. For instance, French researchers issued preliminary findings on November 26 and a follow-up report on December 7 in which they said it would be a big mistake to attribute the rise of the Yellow Vests to social media manipulation and fake news.

The latest report from Avaaz leans strongly in the other direction, which could also be a function of how the Yellow Vest movement has evolved since the start of 2019 as it continues to hold nationwide protests every Saturday.

Avaaz found one post, for example, that claimed to contain images of bleeding yellow vest protesters. In fact, the photo was found by fact checkers to be a picture that was taken near Madrid in 2012. The post had 136,818 shares, generating an estimated 3,511,456 views.

In another instance, a post included a video of Macron dancing to Middle Eastern-sounding music, writing that Macron was dancing “while France suffers.” In reality, the video was shot prior to the protest during the Summit for the Francophonie in Armenia. The post had 183,390 shares, generating 5,700,000 views, according to Avaaz.

Beyond the fake news shares, the study also points out that Russia’s state-backed media channel RT France has used the crisis to expand its viewership. An analysis of the 500 top YouTube results shows that RT France videos about the Yellow Vests have received twice as many views as the combined views of mainstream French media organizations, including Le Monde, L’Obs, Le Huffington Post, Le Figaro, and FRANCE 24.

The impact extends well beyond France’s borders. Avaaz found that France’s far-right political parties have used Facebook to spread disinformation about the movement to boost conspiracy theories about migration.

Although Facebook has in some cases attached fact-checked articles to the fake news stories, they aren’t being seen by enough members and don’t seem to be slowing the spread of the articles.

The project was conducted by a team of investigative reporters, researchers, and data analysts organized by Avaaz as part of an international effort to push back against the information warfare campaigns being launched for the European elections.