Marketers are increasingly using AI to streamline workflows and automate monotonous tasks. According to an Adobe survey, about 15 percent of agencies are already using some form of machine learning, and 31 percent are planning to adopt it by the end of 2019.

London-based Adthena is hoping to lure some of those soon-to-be customers with its AI-driven search marketing intelligence platform. Roughly seven years after its founding and a year after it established a presence in the U.S., the company is today announcing that it has raised $14 million in a series A funding round led by Updata Partners, bringing its total venture capital raised to $18.1 million. Founder and CEO Ian O’Rourke says the funds will be used to accelerate the company’s stateside and global growth and to “strengthen” product development as it prepares to launch new channels.

“[We’ve] already proven the value of the search clarity that we bring to marketers,” he said. “With Updata’s investment and experience, we aim to accelerate delivery of AI-driven capabilities customers have been asking for, while supporting an expanding client list in the U.S. This is a very exciting time for Adthena … as we embark on the next part of our journey.” 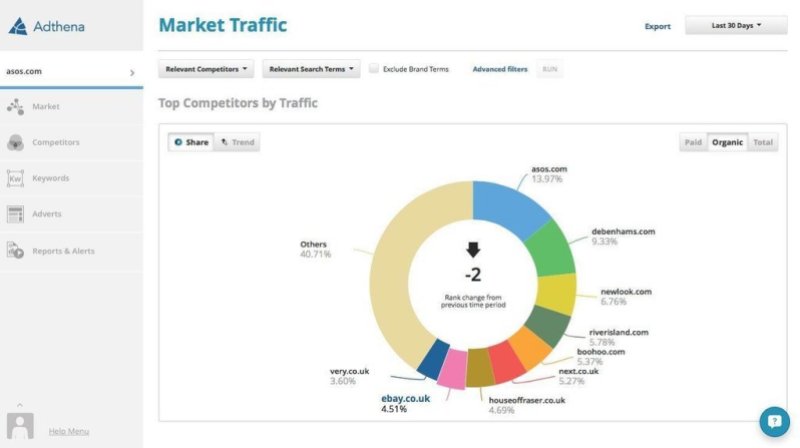 The way O’Rourke tells it, Adthena’s patented product suite leans on machine learning to deliver “dynamic” and “comprehensive” visualizations tailored to brands and campaigns. It’s able to monitor competitors’ paid and organic search activity across “millions” of search terms and to track changes to competitors’ messaging, bidding, and offers. Robust benchmarking and forecasting tools enable brand managers to plot out an individual campaign’s performance by device, date, product group, and category relative to others, and to measure metrics like brand health “instantly.”

According to O’Rourke, Adthena processes over 10 terabytes of new data every day, indexes 500 million advertisements, and keeps tabs on 200 million keywords in 15 different languages.

And with the same technology Adthena uses for competitive analysis, its cloud toolkit optionally maps out affiliate partner, reseller, agency, and franchise activity for compliance and alignment, making it easier to identify infringements of agreements and ad copy violations. It also provides a configurable set of rulesets and triggers that can alert designated users when their immediate attention is required.

“Adthena is at the heart of key performance decisions, as a strategic partner of choice, and driving results for some of the world’s largest enterprise organizations,” said Updata Partners’ Braden Snyder. He plans to join Adthena’s board, along with Updata general partner Jon Seeber, as part of the newly announced series A. “The progress they have made in the U.S. over the last year shows Adthena’s ability to adapt to a new market and create opportunities, which we’re excited to be a part of this coming year.”

Adthena has offices in London, Austin, and Sydney.