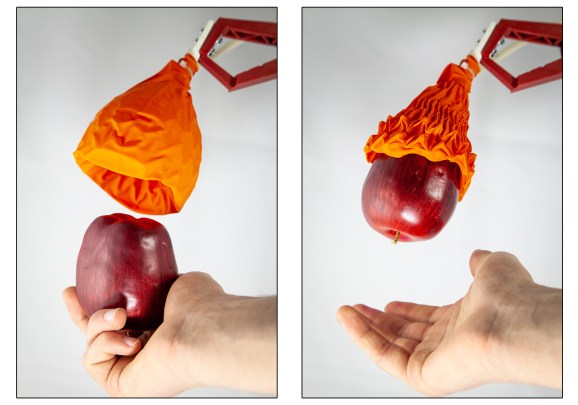 A novel robotic gripper designed by researchers at Harvard and MIT CSAIL.

Robotic hands have a tough time getting a grip on pliable objects, but it’s not for lack of trying — most make do with rigid pincers that aren’t designed for precision grasping. Fortunately, if a newly published paper (“A Vacuum-driven Origami ‘Magic-ball’ Soft Gripper”) is any indication, more versatile systems are on the horizon. In it, researchers at MIT’s Computer Science and Artificial Intelligence Laboratory (CSAIL) and Harvard describe a novel gripper design that’s capable of lifting items in a range of weights, shapes, and sizes.

The team is scheduled to present their work — which was funded in part by the Defense Advanced Research Projects Agency, the National Science Foundation, and the Wyss Institute for Biologically Inspired Engineering at Harvard — at the International Conference on Robotics and Automation (ICRA) this spring in Montreal.

“One of my moonshots is to create a robot that can automatically pack groceries for you,” MIT professor Daniela Rus, director of CSAIL and one of the paper’s senior authors, said in a statement. “Previous approaches to the packing problem could only handle very limited classes of objects — objects that are very light or objects that conform to shapes such as boxes and cylinders, but with the … gripper system, we’ve shown that we can do pick-and-place tasks for a large variety of items ranging from wine bottles to broccoli, grapes, and eggs.”

The team’s hollow, cone-shaped gripper comprises three parts — a 3D-printed, 16-piece silicone rubber skeleton with a gripper-to-mount connector encased by an airtight skin — that together collapse in on objects as opposed to clutching them. It was inspired by the “magic ball,” an origami design that’s folded from a rectangular piece of paper pre-creased with a repeating, offset pattern that reversibly changes between a spherical and cylindrical shape.

The gripper is powered by a pneumatic vacuum and covered by either a 27-inch latex rubber balloon or a TPU-coated nylon fabric sheet, depending on the configuration. The researchers tested three: one with a self-folded fabric skin skeleton, a second with a rubber-molded skeleton, and a third with a tougher rubber skeleton.

“One of the key features of this approach to manipulator construction is its simplicity,” says coauthor Robert Wood, professor at Harvard’s School of Engineering and Wyss Institute for Biologically Inspired Engineering. “The materials and fabrication strategies used allow us to rapidly prototype new grippers, customized to object or environment as needed.”

In one experiment where the team mounted the gripper on a robot to test its strength, it managed to lift and grasp objects — 12 foods items, 19 different bottles and cups, and 14 miscellaneous items, some weighing over four pounds — that were 70 percent of its diameter and up to 120 times its weight without damaging them. It currently works best with cylindrical objects like bottles and cans, according to Shuguang Li, a joint postdoctoral student at MIT CSAIL and Harvard’s John A. Paulson School of Engineering and Applied Sciences (SEAS), which makes it a natural fit for factory production lines.

“Companies like Amazon and JD want to be able to pick up a wider array of delicate or irregular-shaped objects, but can’t with finger-based and suction-cup grippers,” Li said. “Suction-cups can’t pick up anything with holes — and they’d need something much stronger than a soft-finger-based gripper.”

There’s still room for improvement. The most rigid of the three skeletons tested had a weaker grasp due in part to its fabric skin, and holes appeared in the balloon skin. (The researchers propose that bespoke skeletons could be designed for particular tasks.) Furthermore, at particular extensions, the gripper pushed objects outward instead of inward — an unavoidable drawback of its structure.

The team’s encouraged by the initial results, though, and they leave to future work a computer vision system that would allow the gripper to “see” what it’s doing and designs with different skin materials (for example, anti-slip tape or adhesives). They also plan to experiment with varying angles of approach for target objects.

“This is a very clever device that uses the power of 3-D printing, a vacuum, and soft robotics to approach the problem of grasping in a whole new way,” Michael Wehner, an assistant professor of robotics at the University of California, Santa Cruz, said. “In the coming years, I could imagine seeing soft robots gentle and dexterous enough to pick a rose, yet strong enough to safely lift a hospital patient.”