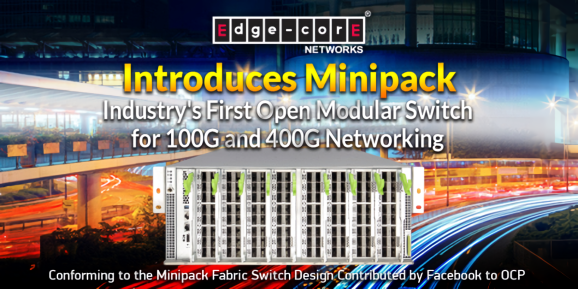 During a keynote at the 2019 Open Compute Project (OCP) Global Summit in San Jose, Facebook today debuted Minipack, a modular whitebox network switch platform it claims is the first of its kind with an “open” design.

“We are excited to work with the community to develop an ecosystem around Minipack,” said director of engineering at Facebook Hans-Juergen Schmidtke in a statement. “[It’s] the next generation of open, modular switch platforms that is more flexible, scalable and efficient for modern data centers.”

The Minipack AS8000 Switch — which was developed by Edgecore Networks, the division of Accton Technology specializing in traditional and open network solutions — is based on Broadcom’s StrataXGS Tomahawk III Switch Series, but occupies a smaller footprint while delivering more compute power at a lower price point. It supports a mix of 100G and 400G Ethernet interfaces up to a maximum of 128 100G or 32 400G ports, and packs Broadcom’s Tomahawk III chips, which Broadcom claims are the highest-performing switch silicon on the market.

“Cumulus and Minipack will power the next generation of data center architecture,” said Cumulus Networks cofounder and CTO JR Rivers. “The modular design of Minipack brings a more open approach to hardware, [complementing] what Cumulus has been doing on the open networking side for years with over 100 different cost-effective hardware options. We’ve always believed that hardware is an important part of the open ecosystem, and through our close work with the teams at Facebook, Edgecore, and Broadcom, the availability of Minipack with Cumulus Linux is a market-leveler — bringing a new level of control over cost and operations that was previously only accessible to the largest network operators.”

Facebook is donating Minipack to the Open Compute Project, an organization that shares data center product designs among companies such as IBM, Intel, Nokia, Google, Microsoft, Dell, Cisco, Lenovo, and Alibaba Group. The idea, Schmidtke said, is to provide the industry with a standardized solution toward the goal of mitigating errors and helping operators manage switches more effectively.

“Openness and collaboration help organizations scale faster, and by building our data centers with fully open and disaggregated hardware and software,” he said. “[And] we continue to drive innovation and give these designs to the community for others to use.”

The Minipack is available from Cumulus Networks and from authorized channel partners. The first PIM options are the PIM-16Q with 16x100G QSFP28 ports and the PIM-4DD with 4x400G QSFP-DD ports.