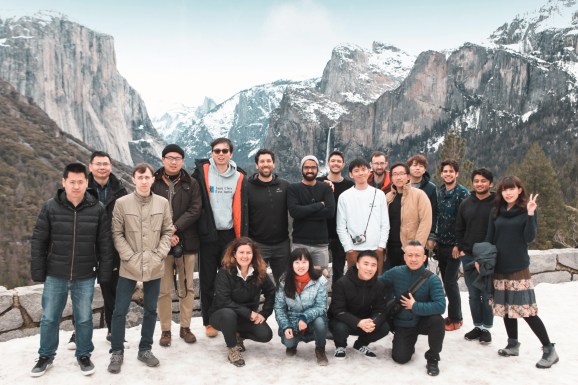 The Polarr team, here pictured at an offsite in Yosemite.

Polarr, a four-year-old San Jose computer vision startup cofounded by Stanford graduate and Google veterans Borui Wang and Derek Yan, today announced that it has secured $11.5 million in series A funding led by Threshold Ventures, with participation from Cota Capital and Pear Ventures. Wang said the fresh capital — which brings its total raised to $13.5 million, according to Crunchbase — will be used to accelerate research and development; expand platform and service support; and grow its technology partnerships in drone, home appliance, ecommerce, and image storage verticals.

“As deep learning compute shifts from the cloud to edge devices, there is a growing opportunity to provide sophisticated and creative edge AI technologies to mobile devices,” said Wang, who serves as CEO. “This new round of financing is a tangible endorsement of our approach to enable and inspire everyone to make beautiful creations.”

Threshold Ventures’ Chris Kelley and Pear Ventures’ Mar Hershenson will join Polarr’s board of directors as part of the round. “Polarr’s expertise across design, hardware, and deep learning is really unique,” said Kelley. “Not only do they give consumers a way to leverage skills from the world’s best photographers, but pros can also use their tools to create something really special.”

Polarr’s bread and butter is its eponymous Polarr Vision Engine, a hardware-agnostic AI stack purpose-built to enable computational photography on a range of devices. It comprises a set of self-trained neural network models, each individually compressed and optimized for on-device storage, RAM usage, and power consumption constraints.

Photo Editor boasts a robust set of overlay and blending modes, in addition to dual lens effects and depth adjustment, intelligent automatic exposure and white balance adjustment, and masking — all contained in a customizable workspace with rearrangable icons. There are local adjustment options, like a border tool that auto-suggests colors based on the content of photos, plus features like face editing and swappable filters.

Polar says that Photo Editor has 4 million monthly users globally and over 20 million users in total.

Album+ offers a more passive experience — it automatically classifies and ranks photos of people, places, documents, objects, and receipts, and it can batch edit and delete hundreds of pictures or remove those that were poorly shot. As for Deep Crop, it leverages machine learning algorithms trained on data from “millions” of photographers around the world to suggest new photo angles.

All three SDKs are freely available for personal use from GitHub but expire automatically and don’t install in production environments.

Polarr’s core team of about 24 members is spread across offices in Shenzhen and Silicon Valley and includes graduates from educational institutions like Stanford, Carnegie Mellon, and Duke and former employees of companies like Microsoft, Google, Qualcomm, and Baidu.