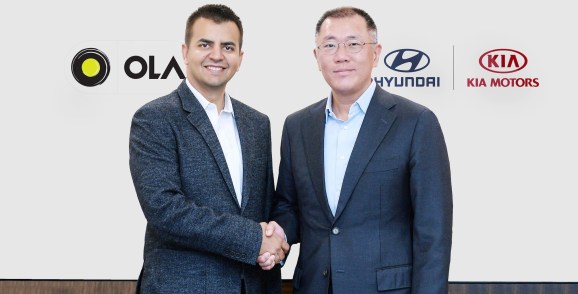 Indian ride-hailing company Ola, which made its international debut last year, is getting more serious about its smart mobility solutions and electric vehicle efforts. The company has secured a $300 million investment from Hyundai and Kia to collaborate on building new fleet solutions and explore mobility for global markets.

As part of the investment, Ola said the companies will also work on improving local infrastructure in India and building electric vehicles for the nation, as well as developing solutions to operate and manage fleet vehicles. Today’s investment also marks the foray of Hyundai Motor Group, which currently focuses on manufacturing and selling automobiles, into developing a complete package of fleet solutions.

As part of the deal, Hyundai and Kia will provide Ola’s driver partners with customized vehicles and the financial support to lease vehicles and pay in multiple installments. The carmakers will also provide maintenance and repair services for these vehicles. This should help lower the final cost of ownership, said Ola, which has inked similar tie-ups with other carmakers in recent years.

In a prepared statement, Ola said it aims to create over 2 million jobs through its mobility ecosystem by 2022. Ola already has over 1.3 million driver partners on its platform. “This partnership will also significantly benefit driver-partners on our platform, as we collaborate with Hyundai to build vehicles and solutions that enable sustainable earnings for millions of them, in the time to come,” said Ola CEO Bhavish Aggarwal.

The three companies said they will accumulate data during Ola’s services operations to improve their vehicles and make changes to their product roadmap. “Hyundai will proactively respond to market changes and persistently innovate to deliver greater value to our customers,” said Hyundai Motor Group executive vice chair Euisun Chung.

From cars to mobility solutions

Hyundai has made it clear that it intends to transition from being a car manufacturer to being a smart mobility solutions provider. In January, the company joined the Linux Foundation and the nonprofit’s seven-year-old Automotive Grade Linux (AGL) effort to contribute to — and reap benefit from — software developed by over 140 companies. Members of AGL, which include fellow carmakers Toyota, Ford, Honda, and Suzuki, work in tandem to develop open source software for infotainment, telematics, and instrument cluster applications.

Earlier this month, Ola spun out its electric vehicle business, which is now called Ola Electric and has raised $56 million in a round led by two of Ola’s investors. Indian newspaper Mint reported last week that Ola was in talks with several carmakers to secure custom-made vehicles and license its connectivity platform.

The investment from Hyundai Motor Group is part of Ola’s ongoing J round of funding, a source familiar with the matter said. So far, participants in the J round include Sachin Bansal — founder of Flipkart, which last year sold a majority stake to Walmart — who has invested $92 million, and existing investor Steadview Capital, which has invested $75 million. Ola is expected to raise $1 billion at a valuation of $6 billion, the person said. A company spokesperson declined to comment on the financing round.

Eight-year-old Ola, which has raised about $3.5 billion in funding from a range of investors, including SoftBank and Tiger Global, is slowly inching toward profitability. In July of last year, Aggarwal said the company was making money on each ride in India. At a conference late last year, he said that Ola will “soon” become cash-flow positive and that it hopes to go public in the next three to four years.

And this rosy outlook should only grow brighter in the coming quarters. Ever since Uber raised money from SoftBank, the two companies have cooled down their aggressive price war to lure customers in India. Last year, Ola was in talks to acquire Uber’s India business, according to a person familiar with the matter. During a visit to India, Uber CEO Dara Khosrowshahi said the company was committed to India but did not rule out a sale.