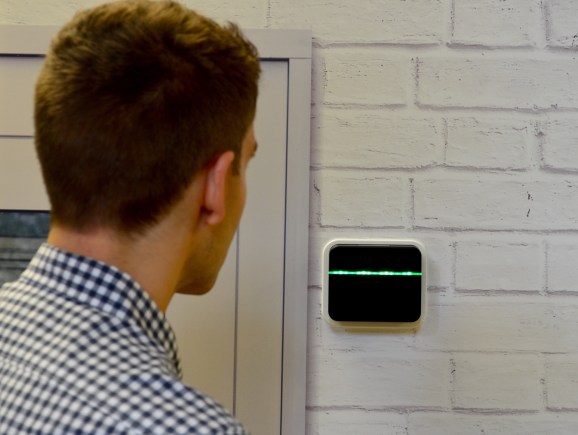 Alcatraz AI today announced the close of a $4 million funding round. Created by former Apple engineer Vince Gaydarzhiev, who helped create Face ID on iPhone 10, Alcatraz uses machine learning and computer vision to control physical access to government buildings and corporate campuses not with a badge, but with your face.

Alcatraz combines software with a hardware device equipped with sensors, mounted next to a locked door, to recognize a person as they approach the device and open the door in less than one second.

The funding will be used to grow its computer vision, improve underlying algorithms, and reduce its false acceptance rate from 1 in 250,000 today to 1 in 500,000.

Pilot programs are currently underway at companies like Google and SAP, as well as with multiple police departments in the San Francisco Bay Area, Gaydarzhiev told VentureBeat in a phone interview.

The device, which includes sensors for color and badge detection as well as 3D mapping, runs on Nvidia TX2, a graphic processing chip often used to power edge AI deployment in drones and delivery robots. The 3D mapping sensor detects the physical presence of a person in front of the door, preventing people from simply being able to hold up a photo of an employee to trick the system and gain access.

Gaydarzhiev was inspired by watching the inefficiency of physical access security protocol at companies like Apple, where security guards are perched at each entrance to screen visitors and employees and keep people from congregating.

Instead of the need for an enrollment plan to record the faces of each person before getting started, Alcatraz can automatically create profiles for each employee. At first the system requires an employee to scan their ID badge, but after a couple days, it allows the person to unlock doors with their face alone.

Gaydarzhiev wants Alcatraz to evolve beyond a device for scanning faces or badges into something integrated into products and machinery to verify that a person has permission to use said device. Alcatraz envisions bringing its solution to devices in areas like health care, where people may use badges often but can’t do biometrics like fingerprint or iris scans as easily because they may be wearing gloves or protective glasses.

“We’re thinking with gen 2 or gen 3 of our technology we’ll be able to make it smaller, remove the badge layer from it, and integrate it into things like hospital x-ray machines, MRI machines, and ATMs,” Gaydarzhiev said.

Alcatraz is also working to make its system talk with APIs to incorporate things like blacklisted databases of criminals or former employees so security can be notified through existing infrastructure management software if someone unwanted tries to get in, he said.

The $6 million funding round was participated in by Hardware Club; Ruvento Ventures; Hemi Ventures; and JCI Ventures, the venture arm of physical security company Johnson Controls.

The Palo Alto, California-based company currently has 20 employees and was created in June 2016. The company has raised a total of $5.8 million.